Nanotechnology, as Practiced in Research Centers and Universities of Muslim World 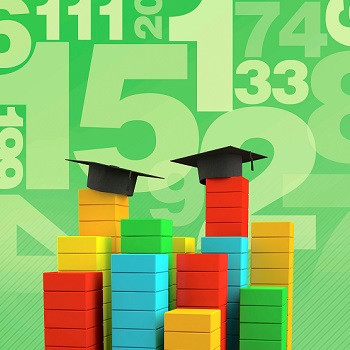 As the universities and research centers of Islamic countries are seeking to keep pace with the global advancement in nanotechnology, Islamic Azad University with 7741, King Abdul-Aziz University with 3300, and the University of Tehran with 2780 ISI-indexed nano-articles published between 2015 and 2018, have made great contributions to this field.

Over the past several years, nanotechnology research has significantly ramped up all around the world, as does throughout the countries which are the members of the Organization of Islamic Cooperation (OIC). This article has been dedicated to give some statistics on the development of nanotechnology research conducted in the universities and research centers of Islamic countries considering their H-index and ISI-indexed nano-articles.

As reported by StatNano, by taking account of the number of universities having more than 100 nano-articles carried between 2015 and 2018, Iran, Turkey, and Malaysia get the top 3 spots on the list with 46, 11, and 10 of such universities, respectively. Egypt, Saudi Arabia, Tunisia, Pakistan, and Qatar, with 9, 6, 4, 3, and 1 universities meeting the aforesaid condition, respectively rank in the next places. The following figure depicts the distribution of these universities among the enumerated Islamic countries. 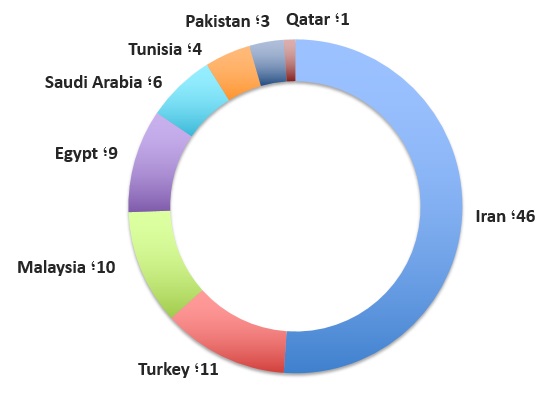 The distribution of the universities which have run more than 100 nano-articles during the past 4 years among the mentioned Islamic countries.

From a different perspective, the following table lists the 20 leading universities of the aforementioned Islamic countries, based on the number of their ISI-indexed nano-articles published during 2015 to 2018. The top of the list is dominated by Islamic Azad University, having 2 independent and 31 state university branches with 400 campuses and research centers in Iran, and 4 branches overseas, which have run a combined total of 7741 nano-articles during the mentioned period of time. This university, with the H-index of 25.0 in 2017, has been ranked between 301 and 400 in the Shanghai Ranking of Academic Subjects 2018 in nanoscience and nanotechnology.

Accordingly, King Abdul-Aziz University, a public university in Saudi Arabia with a total of 3300 ISI-indexed nano-articles carried during the past 4 years, and the H-index of 30.0 in 2017, holds the 2nd spot on the list. Based on the Shanghai Ranking of Academic Subjects 2018, this university has achieved the 49th place in nanoscience and nanotechnology. The 3rd spot of the list is taken by the University of Tehran, which has had 2780 nano-articles between 2015 and 2018, the H-index of 16.0 in 2017, and the Shanghai Ranking of 301-400 in nanoscience and nanotechnology in 2018.

As illustrated in the table, the 4th to 6th places of the list are respectively taken by King Saud University in Saudi Arabia with 2628, the University of Malaya in Malaysia with 1857, and the Amirkabir University of Technology with 1767 nano-articles published during the past 4 years.

Top 25 universities and research centers in Islamic countries, based on the number of their ISI-indexed nano-articles carried between 2015 and 2018 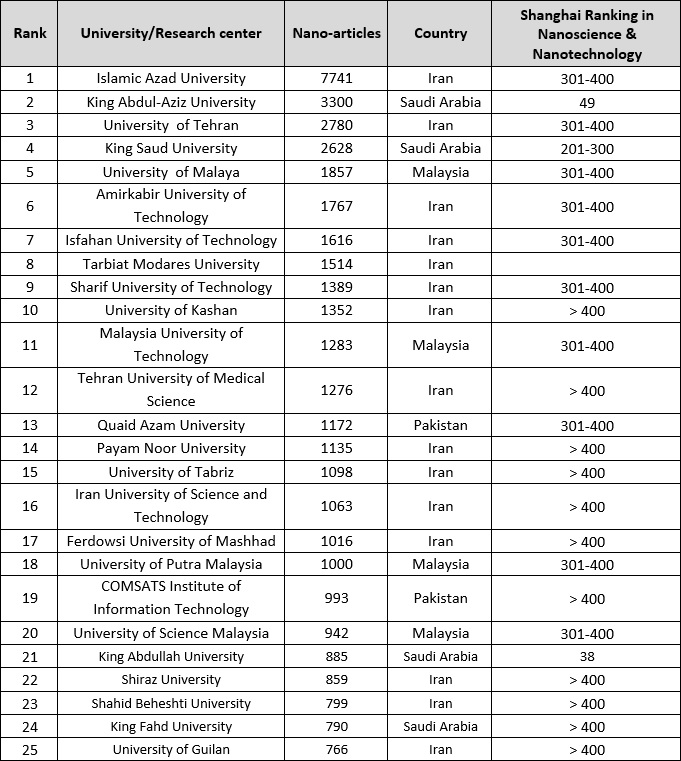