Graphene on its way to Commercialization in the Paint Industry 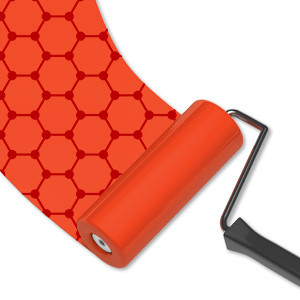 A number of companies involved in the paint industry seek to improve the quality of their products using graphene; the Applied Graphene Materials company has recently undertaken several projects in collaboration with some paint manufacturers, aimed at developing innovative nanotechnology-based products in the paint and coating industry.

Having produced more than 40 million tons of paint worldwide with an estimated value of $120 billion, the paint industry is now developing its products by means of nanotechnology, in so far as the paint market is projected to reach $153 billion by 2030. Thus, an increasing number of companies have recently been trying to use nanotechnology for gaining larger market shares in this sector.

Applied Graphene Materials (AGM), a British company specializing in the production of graphene and its applications, has recently collaborated with various companies to take full advantage of graphene technology to develop advanced coatings, and paint in particular. This company in collaboration with HMG Paints, a company based in England, are now attempting to develop the technology of graphene-containing paints and commercialize them for various industrial applications. Previously, these companies have jointly worked on graphene-containing coatings. Integrating the expertise of HMG in coatings with the graphene solution dispersible in aqueous media has shown great potential for turning into an innovative technology, which together with the long experience of AGM in the incorporation of technology into products will soon be realized, leading to the development of the products having high added value, improved properties, and various industrial applications.

Thanks to the advancement of electronics industry, nowadays, smart coatings are in great demand; for instance, self-cleaning and self-healing coatings are of vital importance for smart phones and other smart devices. It has been estimated that the paint and coating market will conspicuously expand in the near future, owing to the recent investment in the research and development in this sector.

Earlier this year, AGM signed a contract with James Briggs, another British company, so as to develop its graphene products; under the terms of their agreement, James Briggs is currently using graphene materials in its paints and products for improving their qualities and performances such as enhancement in corrosion protection and general coating durability. The two companies are now working together to introduce their joint advanced products into the market later this year; therefore, the market for graphene products will soon be growing. According to the fact that the integration of graphene into lubricants proved to be a success, the development of lubricants has also been included in the collaborative projects of these companies, and a non-partisan company carries out the quality assessment of this technology. AGM has announced that this new technology has shown a sixfold increase in the anti-corrosion properties of paints.

The collaborative activities of AGM are not limited to the aforementioned projects; this company, together with Sherwin-Williams, the world's largest paint and coating manufacturing company, are performing experiments on graphene to benefit from its unique properties for enhancing the formulation of pains. Although the revenues from this partnership had been estimated to be low, this joint project could potentially lead to an increase in the production capacity of this sector.

What's Next for Graphene in the Construction Industry?