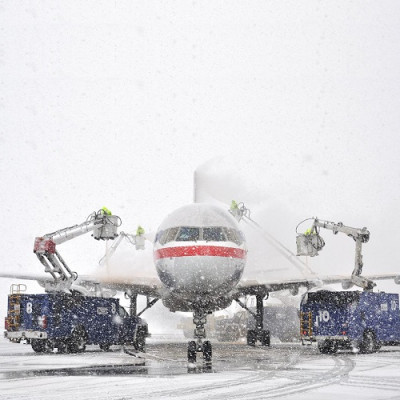 A number of aircraft companies and aviation organizations are investigating the application of de-icing nanocoatings and nanocomposites in production of aircraft surfaces for preventing the snow-related flight delays.

De-icing surfaces are of crucial importance in several industries, especially in aerospace industries; simply because the safety of airplanes in service is closely related to this technology. Ice build-up on aircraft’s wings leads to the air flow disturbance which in turn may engender problems during flight. Hence, the aircraft manufacturers are trying to take the advantage of de-icing systems on the outer surface of the airplanes. There are two approaches for tackling the challenge at hand: using de-icing surfaces, or utilizing de-icing methods.

As for the first approach, nanotechnology can be of help by introducing de-icing nanocoatings. At this point, the application of these nanocoatings has provided the aircraft manufacturers with salient advantages as greater safety, lower maintenance costs, reduced energy consumption, biocompatibility, and ease of application. De-icing nanocoatings can also be used in the automotive, wind turbines, heat exchangers, solar cells, and petroleum industry.

These days, many companies are working to transfer this technology from academia to industry. Recently, UTC Aerospace Systems (UTAS) has acquired the license of a technology for producing a CNT-based heater which have been planned to be functional as an electrothermal ice protection system for aircraft within the coming three or four years. UTAS has purchased the license of this state-of-the-art technology from Metis Design Corporation, which conducted the related research in collaboration with the department of aeronautics and astronautics of Massachusetts Institute of Technology. Having license of this technology, UTAS will be able to collaborate with aircraft manufacturers and authorities to utilize the technology in  commercial products such as unmanned aircrafts and business jets. CNTs can be integrated into composite materials or various metals for manufacturing aircraft’s wings. The presence of CNTs makes it possible to de-ice the wings and other surfaces of the aircraft. These nanotubes have outstanding heat distribution which provides the opportunity of optimizing the de-icing process. UTAS aims to acquire required certification as soon as possible and commercialize its newly adopted technology.

There are a number of various technologies in this filed among which one can mention  de-icing using hot gas or bleed air from the engine which extracts some air from behind the compressor. However, the de-icing system based on CNTs promises a greater efficacy in prevention of the ice formation on the edges of the wings, nose cones, and propellers of aircraft. The directors of UTAS believe that by commercializing this technology, the aerospace industry will undergo a strategic change. In an attempt to provide a laminar flow, aircraft designers usually decrease  wings' thickness which necessitates a more intricate design procedure. Using innovative materials in aircraft manufacturing which paves the way for producing wings with very thin leading edges, compels the companies to turn to the electrothermal technology. Honda Aircraft managed to receive certification for its HondaJet in December 2015 Nevertheless, this company is need of about 11 months of hard work to acquiring the certification for the de-icing system for the natural laminar flow on the aircraft’s wings.