Researchers have recently reported an artificial enzyme produced by nanomaterials, called nanozyme. This enzyme shows superior performance than those of conventional catalysts and is a good candidate to introduce the next generations of bio-nanomaterials in a variety of industrial fields.

As materials having features so resemble enzymes, nanozymes have recently drawn the attention of many researchers thanks to such considerable properties as long-term stability, low costs, mass production possibility, and adjustable catalytic activities, to name but a few. A wide spectrum of materials have been suggested to be used in nanoenzyme production since the discovery of this technology. Nonetheless, this area have always faced two formidable challenges. On the one hand, nanozymes suffer from the low density of the surface active sites than those of natural enzymes. The inhomogenous elemental structure of the nanozymes, on the other hand, makes their mechanism different from natural enzymes. 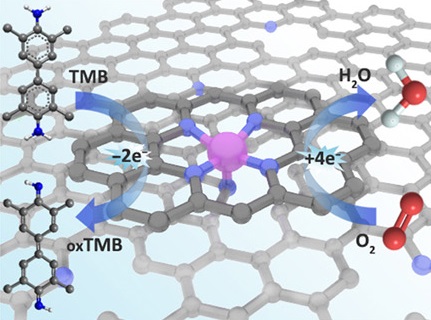 Researchers have discovered a new class of single-atom nanozymes with enzyme-like active sites at Changchun Institute of Applied Chemistry in collaboration with Stony Brook University. They have presented a straightforward strategy for the production of single-atom nanozymes with the active surfaces which are similar to natural enzymes. They have employed bottom-up approaches to prepare FeN5 SA/CNF nanoenzymes aided by carbon nanoframes.

The characterization of the prepared nanozymes has demonstrated a catalytic activity 70 times higher than Pt/C catalysts. Since the synthesized nanozymes have showed oxidase-like features, their effect on four classes of bacteria has been examined, leading to remarkable results. Afterwards, the researchers have continued their evaluation of this nanozymes by animal models and used them on the wound of laboratory mice. The wounds of the mice have been treated by the produced nanozymes, after being infected with bacteria. The results of this test have also been evaluated positively.

The authors have endowed the origin of the oxidase-like activity of this nanozymes with a computer simulation so as to determine the oxidation mechanism of such nanozymes. In this regard, they have adopted density functional theory (DFT) modelling method to further study the oxygen molecular reduction process on single-atom metal sites.

The researchers believe that this approach, which provides a broad range of applications, comes up with a promising insight into the next generations of nanozymes.

The results of this research entitled “Single-atom nanozymes” have been published in the Science Advances journal.