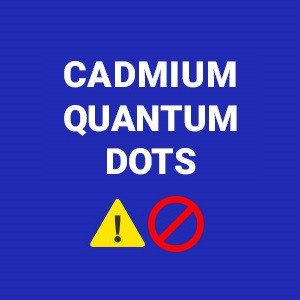 The possibility to impose a ban on products containing cadmium quantum dots is deeply felt in the European Commission so that they may decide to prohibit the import of such products in the near future. Manufacturers and companies that use quantum dots will need to start preparing now for the ban by seeking a credible alternative.

With the advent of nanotechnology, various nanostructures have emerged, among which quantum dots are of vital importance. They have many applications in fields such as photovoltaic cells, displays, and imaging, and their application scope is expanding.

In the meantime, the quantum dots containing heavy metals have attracted great scientific attention due to their novel, intriguing properties that enhance the quality of the products. Cadmium quantum dots have quickly commercialized and have recently become widely used in the display industry so that their products are now available in the market. However, cadmium can be considered as one of the most hazardous metals for the environment and human health, which is currently restricted in many industries. Cadmium, ten times more toxic than mercury or lead, is one of the six hazardous substances banned from use in Europe. In recent years, many manufacturers have found viable alternatives and have tried to reduce this material in their products.

The European Commission is removing deadly cadmium from household products in an expedited timeframe and even a law has been published in the EU’s Official Journal to restrict using them. However, given the lack of commercial supply of cadmium-free quantum dots over the past years, the proposed ban has temporarily suspended, and display companies continue to manufacture the products based on cadmium quantum dots.

Recently, Nanoco has challenged a proposal to extend the exemption to allow the use of cadmium-based quantum dots in display products and televisions in Europe, which put pressure on the European Commission not to make such decision. Cadmium quantum dots import might be facing a serious legal problem in Europe soon, which would slowly spread over the other parts of the world.

So, manufacturers and companies that use these quantum dots in their products need to start preparing now for the ban. Samsung Electronics uses cadmium-free quantum dots in its displays and is not concerned about changing the legal conditions, while some rivals of this company still use cadmium quantum dots which may put their EU market at risk.

Research centers may have to shift their research direction towards less harmful compounds and materials, and newly founded companies should take this fact into consideration that cadmium quantum dots may be banned in the near future in many countries. Research incentives, grants, and financial supports should also be directed to find alternatives for cadmium quantum dots to bring this branch of science and technology to its prosperity.