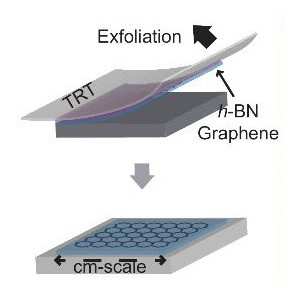 The researchers at the Pohang University of Science and Technology have reported a mechanical transfer method for large-scale graphene films with low defect density. This method has been carried out in an all-dry environment, so there are no chemical impurities.

The researchers at the Pohang University of Science and Technology (POSTECH) have succeeded to address one of the graphene issues. Two-dimensional materials such as graphene with pristine interfaces have a wide range of applications in many functional devices, including transistors and photodiodes. In order to use graphene efficiently, it must be transferred to the desired substrate with pristine interfaces, which is usually done by a carrier. In fact, graphene is mechanically exfoliated from growth substrates, which minimizes atomic defects in the transferred film and preserve the clean interfaces of the film by preventing exposure to wet chemicals, which leave ionic and metal impurities.

Van der Waals interactions assisted transfer is an efficient method for transferring graphene provided that the interactions between graphene and carrier film overcome the adhesive force of graphene to the underlying substrate. Graphene films grown on typical substrates including Cu and SiC do not satisfy the condition, so the fabrication of large-scale graphene with pristine interfaces remains challenging.

The films adhere to the substrates with the adhesion energies of 60 meV/carbon on Cu and 106 meV/C atom on SiC which are significantly higher than typical van der Waals interactions (which have adhesion energies between 40 to 50 meV/C atom). As a result, mechanical transfer by van der Waals forces achieves low yield. To overcome this problem, some carriers should be used, which have stronger adhesions to graphene than to the substrate. However, these methods require undesirable wet etching of the carriers.

Hence, the researchers presented an all-dry mechanical method for the transfer of graphene. In this method, large-scale graphene films can be transferred by non-destructive van der Waals interactions with hexagonal boron nitride (h-BN) carrier films. The key aspect is to provide easily-detachable graphene films. Graphene was grown on Ge(110) substrates, which has weak adhesion to the substrate. The graphene film can be effectively exfoliated and transferred while being attached to an h-BN superlayer by van der Waals interactions. The results show that the transferred films are uniform and continuous with the low density of defects. High-quality graphene film was grown on a Ge(110) substrate by chemical vapor deposition (CVD) and the whole h-BN/graphene composite film was mechanically exfoliated.

Since the production of clean and intact graphene having the minimum structural defects is of pivotal importance in the electronics industry, this technology is mainly employed to deposit graphene thin films in electronic devices.

The results of this study have been published in the Nano Letters journal with the title of "All-Dry Transfer of Graphene Film by Van der Waals Interactions".