And the Award Goes to … Nanotechnology Rising Stars!

With nanotechnology starting to somehow find its way into almost every branch of science, it occurred to some institutions and councils that why not to keep it more competitive with the awards specially made for pioneering research papers, investigators, companies, and technologies in this field; thus, a growing number of prizes and awards have recently been established to focus the efforts of many researchers working in various areas of nanotechnology such as nanomedicine, nanobiotechnology, nanodevices, nanofabrication, nanoelectronics and so on. Find out here about some special nanotechnology awards.

As Zhores Alferov, the 2000 Nobel Prize winner in physics, clearly explained, “The International Prize in Nanotechnology is an acknowledgement of the services of scientists and developers who have laid the theoretical foundations for new technology, and the companies whose products help determine the image of our modern world. It is very important to remember that any new technology is not simply a matter of one or two days, but a process that requires many years, and the efforts of dozens, even hundreds of talented, hardworking people – scientists, engineers, and businesspeople.” This article aims to introduce a number of the prizes given in the fields of nanoscience and nanotechnology. 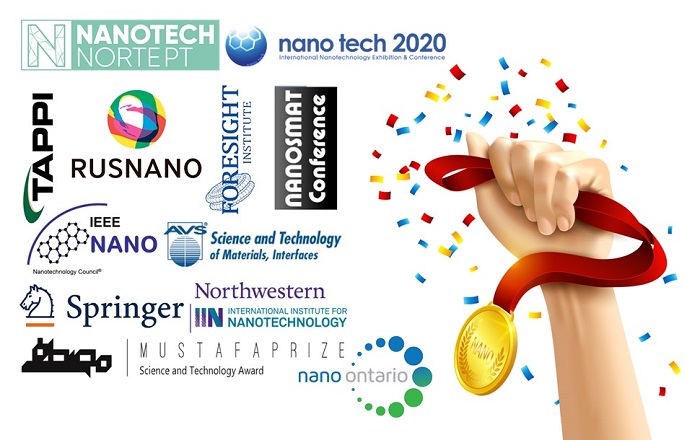 Foresight Institute, a non-profit organization dealing with nanotechnology-related issues, annually gives two Feynman Prizes in the amount of $5,000 each, one to a theoretical and the other to an experimental study, which have greatly advanced the achievement of Feynman's goal for nanotechnology in theory/experiment, which was molecular manufacturing defined as the fabrication of atomically-precise products by means of molecular machine systems.

In an attempt to motivate the researchers to break new grounds in the field of nanotechnology and to recognize one of the most significant technological breakthroughs of human history, Foresight Institute offers a cash prize of $250,000 for the first individual or group to design and fabricate two nanotechnology devices including a nano-scale robotic arm with specified performance characteristics and a computing device capable of adding two 8-bit binary numbers that promises the feasibility of building a nanotechnology computer.

Sponsored by Tsinghua University Press (TUP) and Springer Nature, this annual award was first set up in 2013 for any researcher whose work has made a substantial contribution to the fields of nanoscience and nanotechnology. The award winner is provided with the opportunity to give a Keynote "Nano Research Lecture" at a selected conference and to publish a featured article on their award-winning topic in Nano Research, as well as receiving a fund of $3,000.

The IEEE Nanotechnology Council offers the following awards every year:

1.Pioneer Award in Nanotechnology
This award, consisting of $1000 honorarium and a commemorative plaque, is to recognize individuals who are in the mid or late portions of their careers and have had a significant impact on the field of nanotechnology in terms of conducting innovative research.

4. Chapter of the Year Award
This award, including $500 and a certificate, is aimed at encouraging a successful and effective overall performance of the Chapter in terms of its activities. Exemplary Chapters must have a large number of creative activities that are consistently organized during the year.

5. T-NANO Paper of the Year Award
Every January, Transactions on Nanotechnology (T-NANO) selects a paper that has appeared in the Transactions during the previous calendar year with criteria including technical merit, originality, potential impact on the field, clarity of presentation, and practical significance for applications. The award consists of a certificate for each of the co-authors, and a check of $1000 to be divided among them.

This award, including a personalized plaque and a check for a modest amount, was established in 2009 to honor and recognize international scientists who have had outstanding achievements in the fields of nanoscience and nanotechnology during the course of their professional careers.

The NanoDivision Awards, which are annually presented at TAPPI’s NANO conference for the corresponding year of the award nomination, recognize individuals for their outstanding work, leadership, and service, at various stages of their careers. These awards are given in the four following categories: “leadership & service award,” “technical award,” “mid-career award,” and “student award.”

Comprised of a cash prize and a certificate, this award is annually granted to the members of the Nanometer-scale Science and Technology Division (NSTD) of the professional interdisciplinary society of AVS since 2001 for making outstanding scientific and technical contributions in fabrication, characterization, and fundamental research using nanoscale structures, scanning probe microscopy, technology transfer involving nanoscale structures, and/or in improving and spreading knowledge in these areas.

With the goal of integrating science and business, raising public awareness of nanotechnology achievements, promoting international cooperation, and acknowledging the role of scientist and manufacturers, the RUSNANO Prize was established to recognize the outstanding researchers, scientists, developers, and authors of the R&D projects or technologies implemented into production (up to three people) in the fields of optics and nanoelectronics; nanomaterials and surface modification; medicine, pharmacology, and biotechnologies; and energy efficiency and green technologies. The prize includes the RUSNANO Prize symbol, an honorary diploma, and a fund of RUR 3,000,000.

In recognition of their accomplishments in various fields related to nanoscience and nanotechnology, the Nano Research Journal announces 45 young investigators under 45 every year in a specific field. In 2018, the innovators were selected in the field of nanobiotechnology, covering research focuses of biosensors, imaging, drug delivery, and tissue engineering.

In 2015, International Institution for Nanotechnology (IIN) set up the $250,000 Kabiller Prize and the $10,000 Kabiller Young Investigator Award in nanoscience and nanomedicine; since then, every other year the Kabiller Prize is given to the individuals who have made a career-long, significant contribution to the development of nanotechnology in the fields of medicine and biology, and the Kabiller Young Investigator Award is offered to the individuals who have recently made breaking discoveries with the potential of creating lasting impacts in nanoscience and nanomedicine.

Nanotechnology Young Researcher Award is annually granted to a PhD student within the first five years of completing his/her PhD studies, who has shown outstanding early career brilliance. The winner receives a prize to the value of £300, a free open access credit, and a framed certificate.

This award, sponsored by NanoOntario, recognizes pioneering female scientists and engineers engaged in nano-related R&D from both academia and industry across the province of Ontario. NanoOntario is an all-inclusive organization that attempts to encourage and support woman and members of traditionally under-represented groups involved in science, technology, engineering, and mathematics.

Every year, the International Nanotechnology Exhibition and Conference is held in Tokyo, Japan. In this event, a number of special awards are given to companies, associations, research institutes, and universities, which have enormously contributed to the industrial development by means of nanotechnologies. These awards, which are sponsored by Nikkan Kogyo Shimbun, Ltd., include “grand award,” “life nanotechnology award,” “green nanotechnology award,” “start-up award (domestic),” “start-up award (overseas),” “academic-industrial alliance award,” “research project award,” “business matching award,” “special award,” and “Nikkan Kogyo Shimbun.”