Essenlix Corporation has announced the development of the smallest and fastest blood cell count device. This device, in which nanotechnology, machine learning, and advanced biology are integrated, is about the size of a post-stamp and is 10,000 times smaller than common devices available on the market. To use this device, it is required to make a small hole in the skin for a droplet of blood that is placed directly on a card which is then inserted into a card reader. The reader is connected to a smartphone where the application runs. The results can be ready within one minute, depending on the test parameters, which can be sent to healthcare professionals.

Essenlix's iMOST is an instant personal, mobile, health self-testing platform that uses unique technology innovations. iMOST allows an individual to perform health tests easily, quickly, accurately, and affordably anywhere, anytime, with results in 60 seconds that can be sent immediately to a healthcare professional. With the potential to do various tests of different biomarkers in different body fluids with different biochemistries, the first application of iMOST will be iMOST-CBC. CBC or complete blood count is a vital sign of a person's health, and one of the most common but important lab tests.

iMOST-CBC is comprised of an iMOST Card about the size of a post-stamp (1 in x 1.3 in x  0.04 in), an iMOST reader that's similar in size to a matchbox (1.5 in by 1.7 in by 0.87 in), a smartphone for the hardware, plus iMOST software. iMOST-CBC is about 100 times smaller than the size of today's smallest CBC device, and is 1,000, and 10,000 times smaller than the desk-top and enterprise CBC instruments, respectively. 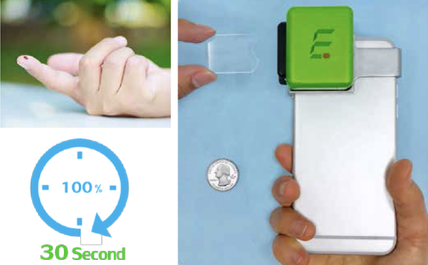 To use it, all that's required is a finger prick for one droplet of blood that goes directly to the iMOST Card, which is then inserted into an iMOST Reader that's attached to a smartphone running the iMOST application. The results can be ready within 60 seconds (dependent on the number of parameters tested), and can be sent to healthcare professionals immediately.

The advantages of iMOST (e.g. size, easy-to-use, speed, and cost) are the result of a host of unique technology innovations that are fundamentally different from conventional methods, and based on out-of-the-box thinking and unique uses of nanotechnology, machine learning, and advanced biotechnology. For example, to replace complex, bulky, expensive conventional CBC instruments with very simple, small, compact, low-cost hardware while still maintaining test result accuracy, iMOST abandoned the traditional "Precision Protocol Paradigm" (i.e. do everything precisely for an accurate result). Instead, iMOST uses Essenlix's "Intelligent Adaptive Paradigm" (IAP) that allows variations in instrument, samples, reagents, operation, and environment but still keeps the results accurate. To drastically increase the speed of sample preparation and testing, iMOST also uses a new sample flow method, an innovative sample holder design, and a new sample morphology that are radically different from conventional approaches.

iMOST-CBC has gone through over four years of development and extensive laboratory tests and clinical trials. iMOST-CBC is currently only for research use, and has not yet been cleared by the FDA.

"iMOST-CBC is the first demonstration of many potential applications of iMOST," said Dr. Stephen Chou, Co-founder and Chairman of Essenlix Corporation. "Our next step is to accelerate the demonstration and the speed to bring the iMOST - the instant personal mobile health test platform to the market and the people."