Professor Hyesung Park’s research team at the Ulsan National Institute of Science and Technology (UNIST) has succeeded in developing a flexible metal grid-based hybrid electrode for use in perovskite solar cells, in which a Cu grid-embedded polyimide (CEP) film is protected by a graphene sheet. This innovative electrode can enormously enhance the stability of perovskite solar cells by preventing their metal-induced degradation due to the graphene sheets’ remarkable performance in suppressing the diffusion of metals and halide ions.

A team of researchers, affiliated with UNIST has come up with a novel electrode that could greatly improve the stability of perovskite solar cells (PSCs), the most promising candidate for the next generation solar cells due to their low cost and high power conversion efficiency. This is because inserting a protection layer between the metal-based electrode and the perovskite film can prevent metal-induced degradation and that graphene, as such a layer, can effectively suppress the diffusion of metals and halide ions.

This breakthrough has been led by Professor Hyesung Park and his research team in the School of Energy and Chemical Engineering at UNIST. In their work, the research team developed a flexible metal grid-based hybrid electrode platform by using a Cu grid-embedded polyimide (CEP) film with a graphene sheet as the protection layer, named GCEP, which exhibited high electrical conductivity, excellent chemical stability, and mechanical durability. Through this, they demonstrated the critical role of graphene as a protection layer to prevent metal-induced degradation and halide diffusion between the electrode and perovskite layer.

Metal oxide-based electrodes (ITOs) have been used as conventional transparent conducting electrodes, but their inflexibility causes them to be easily broken or fractured, hence making them unsuitable to wearable device applications. In particular, the major obstacle to the metal-based transparent conductive electrodes (TCE) application in PSCs is the degradation induced by the interdiffusion of metals and halide ions between the metal electrode and the perovskite layer.

The researchers solved the problem by inserting a graphene sheet as the protection layer at the metal electrode/perovskite layer interface. Graphene has high electrical conductivity, which allows electrons to move easily through it. However, the excellent impermeability of graphene prevents the permeation of even the smallest molecule.

“Graphene can be an effective diffusion barrier if combined with metallic nanostructures having the following characteristics: outstanding impermeability to metal and halide ion diffusion at the metal electrode/perovskite layer interface, enhanced charge collection across the void spacings of the metal nanostructures, minimal loss of optical transmittance as a protection layer due to its high optical transparency, and improvement of the mechanical durability of the hybrid electrode,” noted the research team. 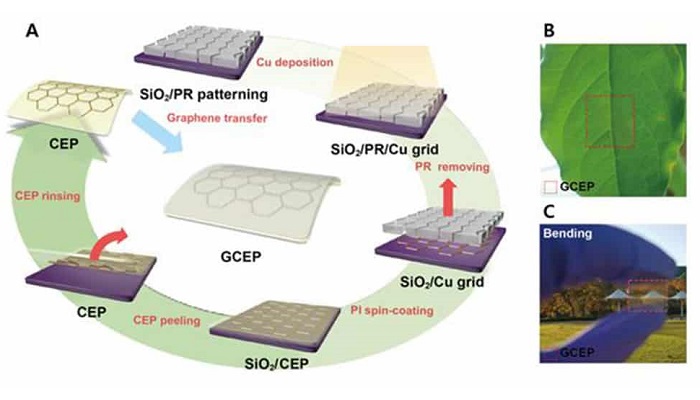 Figure 1. Electrode platform consisting of CEP film and a GCEP. (a) The GCEP fabrication process and (b, c) digital images of GCEP.

The researchers used this transparent and flexible hybrid electrode to fabricate flexible metal TCE-based PSCs, attaining good chemical and mechanical stability. This device achieved a high PCE (16.4%) comparable to that of its ITO-based rigid counterpart (17.5%). They also verified the role of the graphene layer in ensuring the chemical stability of the solar cells by preventing metal and halide ion interdiffusion. In addition, the GCEP electrode improved the PSC photostability by blocking the ultraviolet (UV) and near-UV light. It also maintained over 97.5% of the initial efficiency even after 1,000 hours. In addition, after 5,000 bending tests, it showed excellent mechanical durability such as maintaining 94% of the initial efficiency, and thus it was applicable to next-generation wearable devices.

“This paper demonstrates that inserting a protection layer between the metal-based electrode and the perovskite film could prevent metal-induced degradation and that graphene, as such a layer, can effectively suppress the diffusion of metals and halide ions,” says Gyujeong Jeong (Combined M.S/Ph.D. program of  Energy and Chemical Engineering, UNISt), the first author of the study.

“The new method has significantly improved both the efficiency and stability of PSCs,” says Professor Park. “This work provides an effective strategy to design mechanically and chemically robust ITO-free metal-assisted TCE platforms in PSCs.”

The findings of this research have been published in the online issue of Nano Letters on May 13, 2020.