Japanese scientists have recently achieved a phenomenal success by developing the first-ever 17-carbon-wide graphene nanoribbon using a bottom-up synthesis method. According to their paper published in the journal Communications Materials, this nanoribbon has been proven to have the smallest bandgap ever seen compared to the other graphene nanoribbons prepared by bottom-up approaches to date, thereby opening the way to a new generation of miniaturized electronic devices.

With literally the thickness of one carbon atom and electrical properties that can surpass those of standard semiconductor technologies, graphene nanoribbons promise a new generation of miniaturized electronic devices. The theory, however, remains far ahead of reality, with current graphene nanoribbons falling short of their potential.

A new collaborative study seen in Communications Materials by a project of CREST, JST Japan including Nara Institute of Science and Technology (NAIST), Fujitsu Laboratories Ltd. and Fujitsu Ltd., and the University of Tokyo reports the first ever 17-carbon wide graphene nanoribbon and confirms it has the smallest bandgap seen to date among known graphene nanoribbons prepared by a bottom-up manner.

Large-scale integrated circuits (LSIs) that use silicon semiconductors are used in a wide range of electronic devices, anywhere from computers to smartphones.

They are actually supporting our lives and almost everything else these days. However, although LSIs have improved device performance by reducing the size of the devices, LSI miniaturization is approaching its limit. At the same time, commercial demand continues to put pressure on companies to make higher performing smartphones at smaller sizes, while industry pressure is demanding large-scale manufacturing with smaller equipment.

Other methods and/or materials are definitely needed to solve these problems, says the group leader Dr. Shintaro Sato, Fujitsu Ltd.

"Silicon semiconductors are giving us better performance at smaller sizes. However, we are reaching the limit in how small we can make devices. Thus, we have high expectations for the performance of graphene nanoribbons, which have semi-conducting properties that are only one atom thick - a 2D material," he notes.

Graphene nanoribbons are honeycomb-like structures and, compared to graphene and carbon nanotubes, are the lesser-known carbon-based semiconductor family member. Graphene nanoribbons exhibit unique electronic and magnetic properties that do not appear in two-dimensional graphene.

"Interestingly, the electronic and magnetic properties of graphene nanoribbons are widely tuned as a function of the width and edge structure." says Prof. Hiroko Yamada at NAIST. 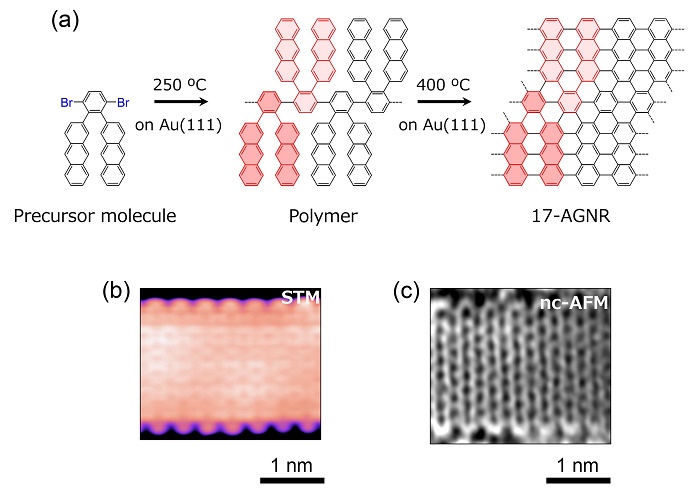 Armchair-type graphene nanoribbons, which are promising type of nanoribbon for device application, display width-dependent bandgap. They can be classified into three subfamilies (3p, 3p + 1, 3p + 2), their bandgaps being inversely proportional to the width of those families. Basically, wider armchair-edge graphene nanoribbons belonging to the 3p + 2 subfamily have the smallest bandgaps among different graphene nanoribbons, having considerable potential to be exploited in GNR-based devices.

Read the original article on Nara Institute of Science and Technology (NAIST).