Picosun Group reports excellent results in ALD-organic bilayer encapsulation of metal electrodes for neuroprosthetics and bioelectronic medicine. Group also reports superior hermetic barrier performance of its ALD nanolaminates against corrosive ion diffusion in aqueous media. This is an important result for medical ALD applications and implantology, where metal components and sensitive microelectronics need to be protected against corrosion caused by human body fluids.

Picosun's ALD nanolaminates were proven to completely block the diffusion of Na+, K+, Cl- and PO43- ions, which are known to be amongst the most corrosive ionic species in aqueous media. Tests were performed at 87 °C PBS (phosphate-buffered saline) solution for 2 months (see Figure 1). Several of Picosun's ALD materials have been proven non-cytotoxic and safe for human tissues already earlier, which gives great flexibility for designing tailored nanolaminate encapsulants for varying substrates and levels of protection. 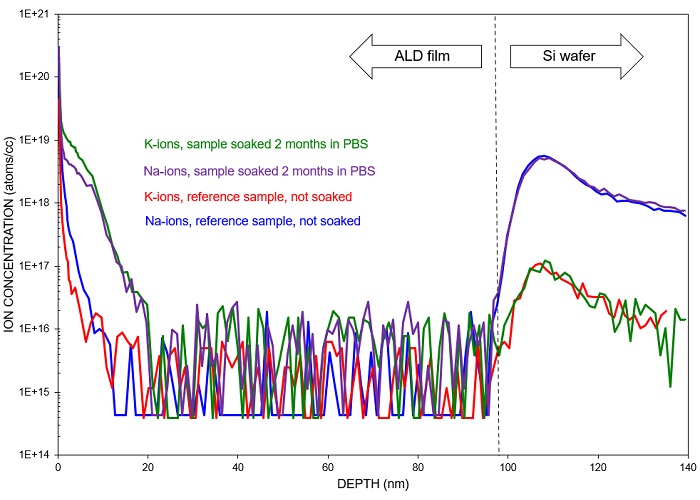 For (platinum) metal electrode protection, ALD HfO2 was first used as an attachment and innermost barrier layer deposited right against the metal, and biocompatible organic polymer PDMS (polydimethylsiloxane) was applied on top of the ALD film to create impermeable, stable bilayer protection combing the best properties of both materials. ALD HfO2 provides good adhesion to and hermetic sealing of the surface, whereas PDMS, as the more "macroscopic" layer, robustness and sturdiness on top of the ultra-thin ALD film. The bilayer coatings were tested by soaking them in PBS solution for 450 days at room temperature.

The results of both tests again support ALD's enormous potential to provide totally new solutions to the challenges medical device industries are facing. The constant trend of increased miniaturization and system-level integration of microelectronics drives the same development in implantable medical devices as well. When the device size decreases but its complexity and the time the device spends inside human body increase, traditional encapsulation methods fail.

"ALD's excellent barrier properties either as such, or combined with other encapsulation methods, support the trend of miniaturization and increased functionalization of medical microelectronics and enable a variety of novel products. Introduction of ALD encapsulation can also help the manufacturers to replace expensive, noble metal components with cheaper materials, when ALD protection ensures the inertness of the devices inside the body. Picosun's ALD technology is already at use at several medical device manufacturers, and we want to keep spearheading ALD's integration into healthcare industries. We are happy to provide production-proven, turn-key solutions to manufacturers to realize a whole new generation of safer, longer-lasting and user-friendly implantable devices for remote and digital healthcare," says Dr. Jani Kivioja, CTO of Picosun Group.

Read the original article on Picosun.