A pair of Clemson University scientists are among the co-authors of a paper on research into using quantum dots to usher in the next generation of safer, highly efficient solar cells.

The paper titled “Lead-free Cs4CuSb2Cl12 Layered Double Perovskite Nanocrystals” has been published online by the American Chemical Society. The journal article’s authors include Kanishka Kobbekaduwa, a third-year Clemson graduate student in the College of Science’s department of physics and astronomy, and Jianbo Gao, an assistant physics professor at Clemson.

The paper details the search for environmentally benign materials to use in solar-cell and photodetector production, with a focus on lead-free perovskite nanocrystal for quantum dots. Simply put, a quantum dot is a couple of nanometer-sized bits of semiconductor material with applications in a wide range of technologies. By comparison, the diameter of a quantum dot is about 10,000 times narrower than the diameter of a strand of human hair.

The goal is to replace the older, less-efficient silicon-based semiconductors that are the current industry standard.

“Our main goal is understanding the inner workings – i.e., how carriers move inside when they’ve been excited by an external source of power – of a potentially useful material, mainly in the field of optoelectronics,” Kobbekaduwa said. “My current work is to aid in the goal of increasing the efficiency of solar cells, particularly solar cells based on perovskite quantum dot materials which are cheaper and far easier to manufacture than the current generation of silicon-based solar cells.”

The research has myriad applications and could lead to a new generation of more efficient devices, including LEDs, photoconductors, lasers and photodetectors.

“QDs are particularly significant as they offer benefits in a wide range of fields,” Kobbekaduwa explained. The next-generation quantum-dot devices “should offer greater efficiency, reliability, and cheaper prices due to lower manufacturing costs.”

“Quantum dots” might sound like something out of a science fiction movie, but Kobbekaduwa said the microscopic QDs are already used in a variety of devices that are familiar to consumers, including HDTVs with QD-based QLED screens that are manufactured by Samsung.

Because of the specific properties of quantum dots, they offer several advantages over traditional, silicon-based CMOS sensors. One of those properties allows QD sensors to detect infrared energy, which Gao said could have a wide range of applications, from facial recognition technology to manufacturing quality control.

“The current challenge for camera technology is you cannot take an image in the dark,” Gao said. “The future technology will allow you to take daylight as well as night images, because of the infrared capability. Imagine your cell phone taking images at night without the need for a flash.” 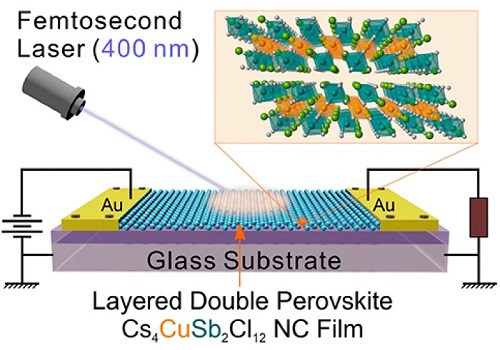 A major advantage of quantum dots is that they are small enough to be suspended in an ink-like material, which can then be sprayed onto a sensor’s underlying electronics. This process promises to make it cheaper to produce better photodetection sensors with applications from professional photography to manufacturing quality control to cellphone cameras.

“The photodetector, you’re basically shining a light on it, and that’s the basis for all imaging technology,” Gao said.

The paper points out that “concerns about the toxicity of lead-based perovskites have aroused great interest for the development of alternative lead-free perovskite-type materials.”

“Basically, our team worked together to make a solution with non-toxic materials that we can use to make photodetectors,” Gao said. “Our dream is to replace the ‘hard’ semiconductor industry with solution-processed semiconductor materials.”