An RMIT-UNSW collaboration has applied liquid-metal synthesis to piezoelectrics, advancing future flexible, wearable electronics, and biosensors drawing their power from the body's movements.

This property, along with their inherent flexibility, makes them likely candidates for developing flexible nanogenerators that could be used in wearable electronics or internal, self-powered biosensors.

However to date, this potential has been held back by limitations in synthesising large, highly crystalline monolayer tin-monosulfide (and other group IV monochalcogenides), with difficulties caused by strong interlayer coupling. The new study resolves this issue by applying a new liquid-metal technique, developed at RMIT, to synthesise the materials.

The work started over two and a half years ago and strong collaborative work between RMIT and UNSW allowed its fruition. Ms Hareem Khan, the first author of the paper, showed remarkable perseverance to surmount many technical challenges to demonstrate the viability of the concept, with Prof Yongxiang Li.

The unprecedented technique of synthesis used involves the van der Waals exfoliation of a tin sulphide (SnS), that is formed on the surface of tin when it is melted, while being exposed to the ambient of hydrogen sulfide (H2S) gas. H2S breaks down on the interface and sulfurises the surface of the melt to form SnS.

The technique is equally applicable to other monolayer group IV monochalcogenide, which are predicted to exhibit the same strong piezoelectricity. This liquid metal based method allows us to extract homogenous and large scale monolayers of SnS with minimal grain boundaries.

Synthesis process: an atomically-thin layer of tin-sulfide is applied onto a flexible nanogenerator transducer.

Measurements confirm the material has high carrier mobility and piezoelectric coefficient, which translates into exceptional peak values of generated voltage and loading power for a particular applied strain, impressively higher than that any previously reported 2D nanogenerator.

High durability and flexibility of the devices are also demonstrated. This is evidence that the very stable as-synthesised monolayer SnS can be commercially implemented into power-generating nanodevices. 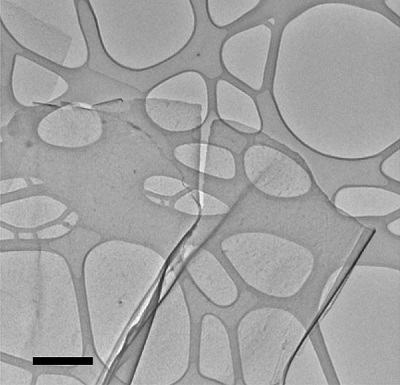 They can also be used for developing transducers for harvesting mechanical human movements, in accordance to the current technological inclinations towards smart, portable and flexible electronics.

Even more sensitive piezoelectric materials can take advantage of the small voltages generated by extremely small mechanical displacement, vibration, bending or stretching to power miniaturised devices, for example biosensors embedded in the human body, removing the need for an external power source.