Layer of Nanoparticles Could Improve LED Performance and Lifetime

Adding a layer of nanoparticles to LED designs could help them produce more light for the same energy, and also increase their lifetime.

This is according to a team from Imperial College London and the Indian Institute of Technology (IIT) Guwahati who have found a new way to boost the amount of light LEDs produce. They report their innovation in the journal Light: Science & Applications.

Making light-emitting diode (LED) light sources more efficient and longer-lasting will mean they use less energy, reducing the environmental impact of their electricity use. LEDs are used in a wide range of applications, from traffic lights and backlighting for electronic displays, smartphones, large outdoor screens, and general decorative lighting, to sensing, water purification, and decontamination of infected surfaces.

The team modelled the impact of placing a two-dimensional (single layer) of nanoparticles between the LED chip, which produces the light, and the transparent casing that protects the chip. Although the casing is necessary, it can cause unwanted reflections of the light emitted from the LED chip, meaning not all the light escapes.

Co-author Dr Debabrata Sikdar from IIT Guwahati, formerly a European Commission Marie Curie-Sklodowska Fellow at Imperial, commented: “While improvements to the casing have been suggested previously, most make the LED bulkier or more difficult to manufacture, diminishing the economic effect of the improvement. 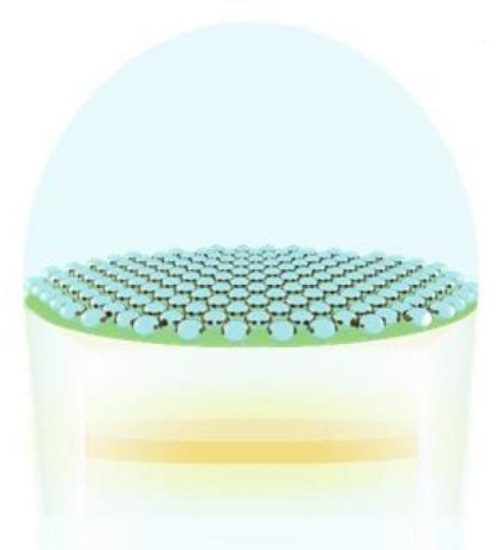 Illustration of the nanoparticle layer within the LED casing.

Co-author Professor Sir John Pendry, from the Department of Physics at Imperial, said: "The simplicity of the proposed scheme and the clear physics underpinning it should make it robust and, hopefully, easily adaptable to the existing LED manufacturing process.

“It is obvious that with larger light extraction efficiency, LEDs will provide greater energy savings as well as longer lifetime of the devices. This will definitely have a global impact on the versatile LED-based applications and their multi-billion-dollar market worldwide."

From theory to practice

Co-author Professor Alexei Kornyshev, from the Department of Chemistry at Imperial, commented: “The predicted effect is a result of development of a systematic theory of various photonic effects related to nanoparticle arrays at interfaces, applied and experimentally tested in the context of earlier reported switchable mirror-windows, tuneable-colour mirrors, and optical filters.”

The next stage for the research will be manufacturing a prototype LED device with a nanoparticle layer, testing the best configurations predicted by the theory – including the size, shape, material and spacing of the nanoparticles, and how far the layer should be from the LED chip.

The authors believe that the principles used can work along with other existing schemes implemented for enhancing light extraction efficiency of LEDs. The same scheme could also apply to other optical devices where the transmission of light across interfaces is crucial, such as in solar cells.