Audible sound enables chemical coloring and the coexistence of different chemical reactions in a solution.

Albert Einstein once said, “I see my life in terms of music.” Perhaps inspired by his words, scientists at the Center for Self-assembly and Complexity (CSC), within the Institute for Basic Science (IBS, South Korea) now see chemical reactions in the presence of music. The IBS research team has reported that audible sound can control chemical reactions in solution by continuously supplying energy sources into the interface between air and the solution. The sound-controlled air-liquid chemical interactions “painted” intriguing and aesthetic patterns on the surface and bulk of the solution.

“The Pied Piper of Hamelin tells the mythological story of a pied piper who lured rats away from the city of Hamelin by enchanting them with the music from his magical pipe. With music working like a fuel for such artistic control in chemistry, our study has shown that even synthetic molecules can exhibit life-like behavior – listening and following a musical track,” says Dr. Rahul Dev Mukhopadhyay, the co-first and -corresponding author of the study.

The results of this study were published online on August 10 in the journal Nature Chemistry.

Music (or audible sound with a frequency range of 20 to 20,000 Hz) in fact finds useful applications in various fields, such as boosting plant cultivation or livestock breeding and even for therapeutic purposes. Ultrasound (greater than 20,000 Hz) has long been used as an essential tool in medical diagnosis. However, audible sound has rarely been associated with chemical reactions due to its low energy. Previous studies have usually focused only on its effect on the movement of water surface.

In this study, the IBS research team has gone further than that. They hypothesized that sound-generated water waves may fuel chemical reactions between air and liquid. "In fact, one aspect of a climate change study is about how CO2 concentration in the ocean changes depending on the movement of ocean waves. In retrospect, it makes sense that a wavy ocean is a more suitable condition for CO2 to be absorbed in the ocean than a still ocean. Our study has revealed the function of audible sound as a source for controlling chemical reactions, which occurs all around us, but has not been noticed till now," explains Dr. Hwang Ilha, the co-first and -corresponding author of the study. 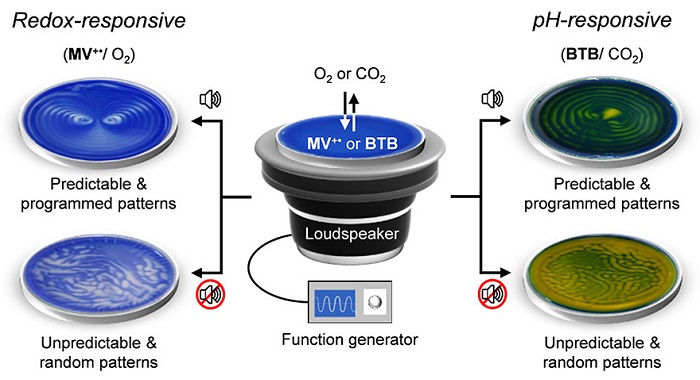 In their experimental set-up, the water was placed on a Petri dish and positioned on top of a speaker. When sound was played through the speaker, different surface wave patterns were generated—depending on the frequency and the amplitude of the audible sound source and the geometry of the vessel. To see how this vibrating air-water interphase controls the dissolution of atmospheric gases like oxygen or carbon dioxide into water, the researchers used O2-sensitive methyl viologen (MV2+/MV+ ) redox couple and CO2-sensitive pH indicator bromothymol blue (BTB).

Organic molecule methyl viologen is normally colorless or white, but turns deep blue upon chemical reduction. When a blue-colored solution of reduced methyl viologen in a Petri dish was exposed to air with sound playing, some regions of the solution slowly turned colorless. The sound waves generates oscillation of the fluid, prompting a streaming effect, and the solution underwent a distinct observable color change due to the gradual dissolution of atmospheric oxygen.

Those not affected by the streaming retained their blue color. In the absence of sound, the uncontrolled dissolution of oxygen and natural convection currents of chemicals in solution resulted in a random pattern, which was different each time over the repetition of the same experiment.

However, when the same solution was exposed to low frequency sounds below 90 Hz, very interesting and aesthetic patterns were generated. More specifically, two counter-rotating vortices emerged in blue and white contrast in the presence of 40 Hz sound. The same pattern repeated in the same condition during subsequent cycles.

The experiment indicates the reaction with oxygen, which is determined whether the solution is colorless or blue. In other words, by applying sound to a solution, the researchers could control the local molecular concentrations of oxygen in different regions that compose the same solution. Just like the surface waves, the patterns vary according to the frequency of the applied sound as well as the shape of the dish. The patterns also exhibited self-healing behavior, i.e., they recover their original pattern structure after being manually disturbed.

Sound-controlled pH-specific domains and spatiotemporal patterns. Time-dependent changes during pattern generation with a pH indicator (BTB) placed in a CO2-exposed Petri dish in the presence of 40 Hz sound. Coexistence of pH-specific spatiotemporal domains in a BTB pattern (middle).

Therefore, when a blue-colored basic solution of BTB is exposed to carbon dioxide, the solution gradually turns green and eventually changes to yellow. During this process, if the solution is exposed to audible sound, a three-colored pattern having two vortices was generated. Interestingly, the pattern represents the coexistence of acidic, neutral, and basic domains in a solution.

"Our study visualized a chemical environment that is partitioned into different molecular environments without any physical barrier, resembling cellular microenvironments. This is a novel discovery that may replace the common sense belief that the pH of a solution is uniform throughout all of the vessel," notes Dr. Hwang.

Extending the concept beyond simple molecules, the researchers utilized their strategy to program the organization of organic molecules within solution. In all cases, the sound generated organic aggregate patterns were obtained transiently and maintained only in presence of a steady supply of chemical fuel, which may be either a reducing agent or a base. This type of behavior is generally exhibited by intracellular biochemical processes which are maintained with a steady supply of fuels or energy currencies, such as adenosine-5'-triphosphate (ATP) or guanosine-5'-triphosphate (GTP).

Prof. Kimoon Kim, Director of the IBS Center for Self-assembly and Complexity, who supervised the overall research, added, "This is the first study to show that it is possible to control and visualize chemical reactions using audible sound. In the near future, we may further expand the scope of use of audible sound from chemistry to other fields, such as physics, fluid mechanics, chemical engineering and biology."

Read the original article on Institute for Basic Science.