A research team at Tohoku University evaluated the state of nanoprodrugs (NPD) inside cancer cells using the Förster Resonance Energy Transfer (FRET) based microscopy technique. FRET allowed the researchers to observe the state of NPDs from intact particles to the dissolved prodrug.

The majority of drug delivery systems use nano carriers to transport drugs due to their small size and ability to distribute drugs to otherwise inaccessible sites of the body. The downside to this small size, however, is that large quantities are needed to match the required dosage.

Alternative carrier-free systems, known as nanoprodrugs (NPD), show immense promise for cancer treatment. For example, a SN-38 NPD has about 10 times higher anticancer efficiency than commercially available drugs. Now, researchers have, for the first time, developed a comprehensive study on the dynamics of SN-38 NPDs inside cancer cells, including their internalization rate, intracellular localization, and degradation, as well as their therapeutic efficiency.

"These innovative systems show high anticancer activity, but the knowledge fundamental for clinical translation, such as their interaction with cancer cells, was still lacking," said Professor Hitoshi Kasai, co-author of the study.

The research team evaluated the state of NPDs inside cancer cells using the Förster Resonance Energy Transfer (FRET) based microscopy technique. FRET relies on the energy transfer between two light-sensitive molecules. Taking advantage of the fluorescent property of the SN-38 along with the Bodipy FL fluorescence probe in the NPDs specifically designed for this study, FRET allowed the researchers to observe the state of NPDs from intact particle to the dissolved prodrug. 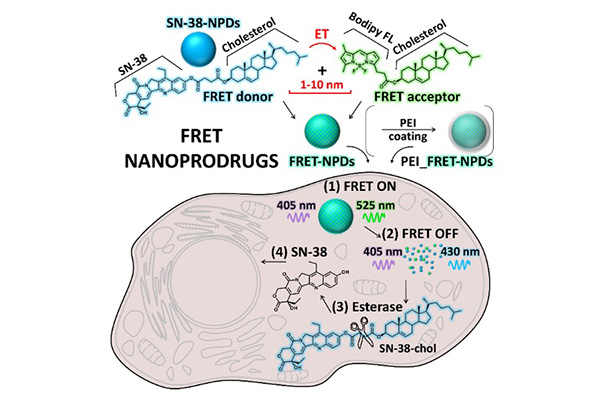 Confocal laser microscopy observation confirmed significant NPD degradation from intact state to a dissolved prodrug inside the cells over time. This means that NPDs were consistently absorbed by cells as intact particles before being transported into the lysosomes - a membrane bound organelle containing digestive enzymes. Once inside the lysosomes, the SN-38 prodrug dissolved from an intact particle (Figure 2) and performed its therapeutic effects on the cancer cells.

Kasai adds that "Our works provides a comprehensive overview of the dynamics of prodrug nanoparticles inside cancer cells, allowing for further progress towards their application as next-generation anticancer drug delivery devices."

Fluorescence images of NPDs (in blue) co-localizing and degrading inside lysosomes (in red) over time.