An Environmentally Friendly Way to Transform Silicon into Nanoparticles

Skoltech scientists and their colleagues from Lomonosov Moscow State University (MSU) have developed a new method of silicon recycling. Their research was published in ACS Sustainable Chemistry & Engineering.

The majority of solar panels that are produced in ever-increasing quantities use silicon. Solar panels that usually have a service life of 25 to 30 years tend to degrade and produce less electricity over time, making silicon waste recycling a hot-button issue. If we do nothing to recycle silicon waste, our planet will end up cluttered with 60 million tons of used photovoltaic panels by 2050. Converting silicon into silicon oxide nanoparticles has important implications for the environment by dealing with the silicon waste recycling issue and providing a new source of nanoparticles for various uses in science and industry. 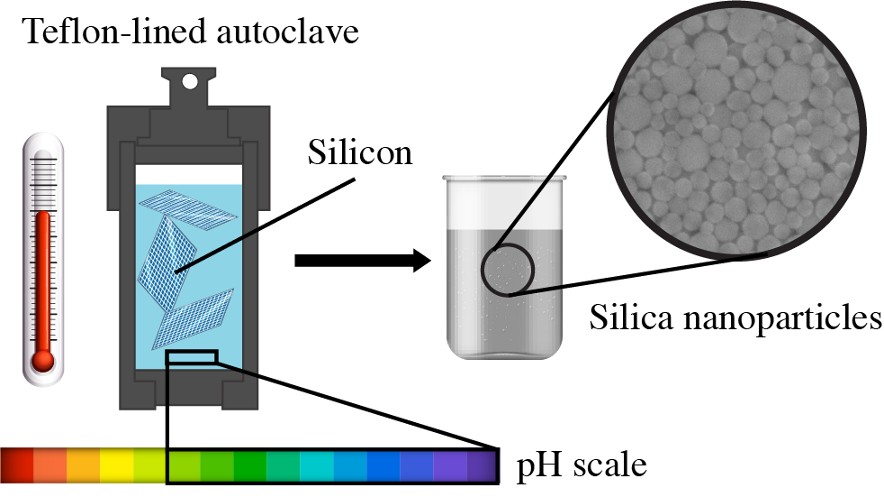 A group of researchers led by Stanislav Evlashin, a senior research scientist at the Skoltech Center for Design, Manufacturing and Materials (CDMM), demonstrated a simple and 100% efficient method of converting silicon wafers into nanoparticles in an aqueous solution. This discovery can help find an environmentally friendly way of silicon recycling without using toxic chemicals.

The new controllable conversion process enables controlling the sizes of the nanoparticles which can then be reused in optics, photonics, medicine, and other fields.

“The used panels are converted into nanoparticles using hydrothermal synthesis in an aqueous environment. The good thing about this process is that nanoparticle sizes can be controlled within a range of 8 to 50 nm without using a lot of equipment,” explains Evlashin.

The researchers used three types of silicon wafers in the experiment: HR (High resistivity), N-type (Nitrogen-doped), and P-type (Phosphorus-doped). Their theoretical calculations based on the density functional theory showed that the Si-H bonds form on the surface of HR-plates even without using ammonia as a catalyst. The reaction may also be accelerated by using additives, such as phosphorus and boron dopants, and molecular defects (in the case of solar panels).

“The vast majority of methods used to synthesize silicon oxide nanoparticles are based on the bottom-up approach and, therefore, use alkoxides as a precursor. By contrast, ours is a top-down method that uses bulk silicon as a source, which creates a wealth of advantages, such as simplicity, scalability, and controllable particle size distribution. Temperature and hydrolysis time are the key parameters of the synthesis that influence the particle size distribution. We noticed that an increase in pH has a strong effect on the particle formation rate. This is why we used ammonia which made the reaction in an aqueous medium much faster,” comments Julia Bondareva, a Skoltech PhD student.

“We decided to figure out how nanoparticles form in the process, among other things. To do this, we used a heterogeneous nucleation model with a finite number of nucleation centers distributed over the silicon source surface,” says Timur Aslyamov, a senior research scientist at Skoltech.

Alongside pure silicon, the scientists used industrial solar panels based on the Si-ITO heterostructure which behaved in the same way as silicon panels and were successfully converted into nanoparticles. This research marks a major milestone towards environmentally safe recycling of silicon waste and creating new sources of silicon oxide nanoparticles.