Boundaries No Barrier for Thermoelectricity

Though the Summer Olympics were postponed, there’s at least one place to see agile hurdlers go for the gold. You just need a way to view these electron games.

Using a novel optical detection system, researchers at Rice University found that electricity generated by temperature differences doesn’t appear to be affected measurably by grain boundaries placed in its way in nanoscale gold wires, while strain and other defects in the material can change this “thermoelectric” response.

The phenomenon could allow for the detection of crystalline defects in conducting materials that are difficult to spot and characterize with even the most advanced microscopic methods.

The result was a surprise to researchers led by Rice physicist Doug Natelson and doctoral alumna Charlotte Evans, now a staff scientist at Sandia National Laboratories, who pursued the explanation after seeing measurements they couldn’t explain a few years ago. 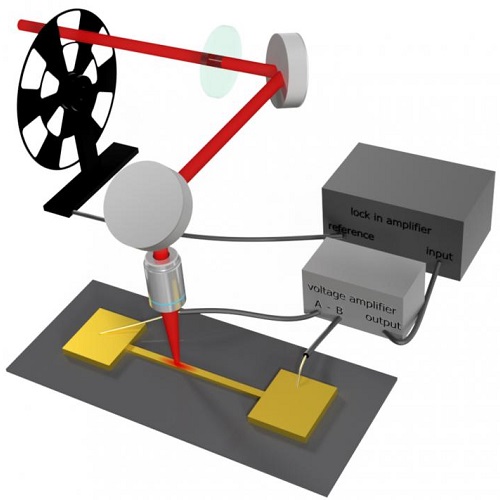 Using a novel optical detection system that heats nanoscale gold wires with a single laser, researchers at Rice University showed electricity generated by temperature differences is not affected measurably by grain boundaries, while strain and other defects in the material change the thermoelectric response.

The study appears in the Proceedings of the National Academy of Sciences.

Grain boundaries are the planes in materials where misaligned crystals meet, forcing atoms along the edge to adjust as they bind to their neighbors. Measurements in bi-crystal gold nanowires produced by the group of Stanford University electrical engineer and co-author Jonathan Fan showed no detectable effect on thermoelectric voltages at the grain boundary. The electrons in the metal simply ignored the single grain boundary.

Temperature differences in conductors create thermoelectricity through the Seebeck effect, one type of thermoelectric effect. This effect is commonly used to measure temperature differences and to control thermostats. The Natelson lab triggered the Seebeck effect by heating one portion of Fan’s wires with a tightly controlled laser, driving electrons to move from the hot location toward colder regions, and produced a voltage to be measured. No measurable change in the voltage was seen when the laser was moved across the grain boundary in the bi-crystals. 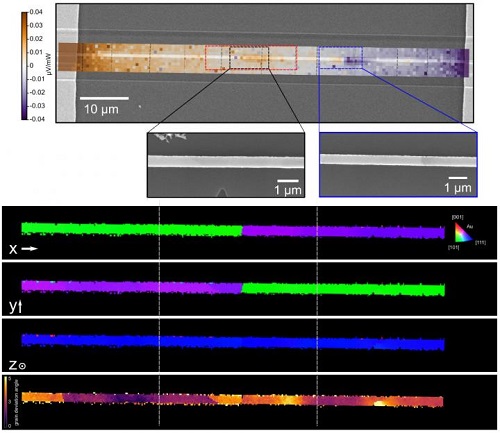 Rice’s optical detection system reveals small structural defects in a gold nanowire that may appear to be a perfect crystal under a scanning electron microscope. The discovery has implications for making better thin-film electronic devices.

When the laser was moved across parts of the same wires that were deformed, with distortions in the crystal lattice throughout the wire, changes in the voltage became apparent, Natelson said. Annealing the distorted devices partly healed the defects, resulting in clear changes in the thermoelectric current.

“There’s a community of people who play around with improving thermoelectric response,” Natelson said. “They need to be aware that structural issues like very small distortions to the lattice have effects that are not necessarily small. People tend to ignore these tiny structural issues, but anytime you’re making thin-film devices, there’s baked-in stress and strain in the material, just because of the way it’s made.”

Evans said nanoscale crystals are often characterized via electron backscatter diffraction (EBSD), an expensive and time-consuming process. “The benefit of our process is its simplicity,” she said. “We use a large spot size from a laser, two microns, which is much larger than the size of an e-beam, and we can detect variations using just a lock-in technique, a scanning laser and a voltage amplifier.

“If you look at the plain EBSD data, it looks as though you have a pristine crystal,” she said. “And it’s not until you post-process the data and look at how each pixel varies from the next that you would see small distortions along the length of the wire. It’s complicated to detect. That’s why it’s so remarkable that we could detect these little variations with a laser.”

“So if you want to do something clever and exploit the thermoelectric response, you need to understand the devices you’re making with standard, top-down fabrication methods,” Natelson said. “The stress and strain and what seemed like minor structural imperfections can have an easily detectable influence.”

Stanford alumnus Rui Yang and graduate student Lucia Gan are co-lead authors of the paper. Co-authors are graduate students Mahdiyeh Abbasi and Xifan Wang of Rice and postdoctoral researcher Rachel Traylor of Stanford. Natelson is department chair and a professor of physics and astronomy and a professor of electrical and computer engineering and of materials science and nanoengineering.