A team of researchers from China, the U.S., and Canada has developed a high-yield method for assembling targeted nanoparticle clusters.

In their paper published in the journal Science, the group describes their method and possible uses for it. Oleg Gang, with Columbia University has published a Perspective piece in the same journal issue outlining this new effort.

Over the past several decades, scientists have learned how to create nanoparticles—particles of matter that are between 1 and 100 nanometers in diameter—for a wide variety of purposes. They are currently created using one of several techniques. The most popular are attrition, gas condensation, chemical precipitation, hydrothermal synthesis, ion implantation and pyrolysis.

Each of these approaches follows similar recipes. Most use packing, in which the arrangement of tiny particles winds up determining the formation of the resultant cluster. 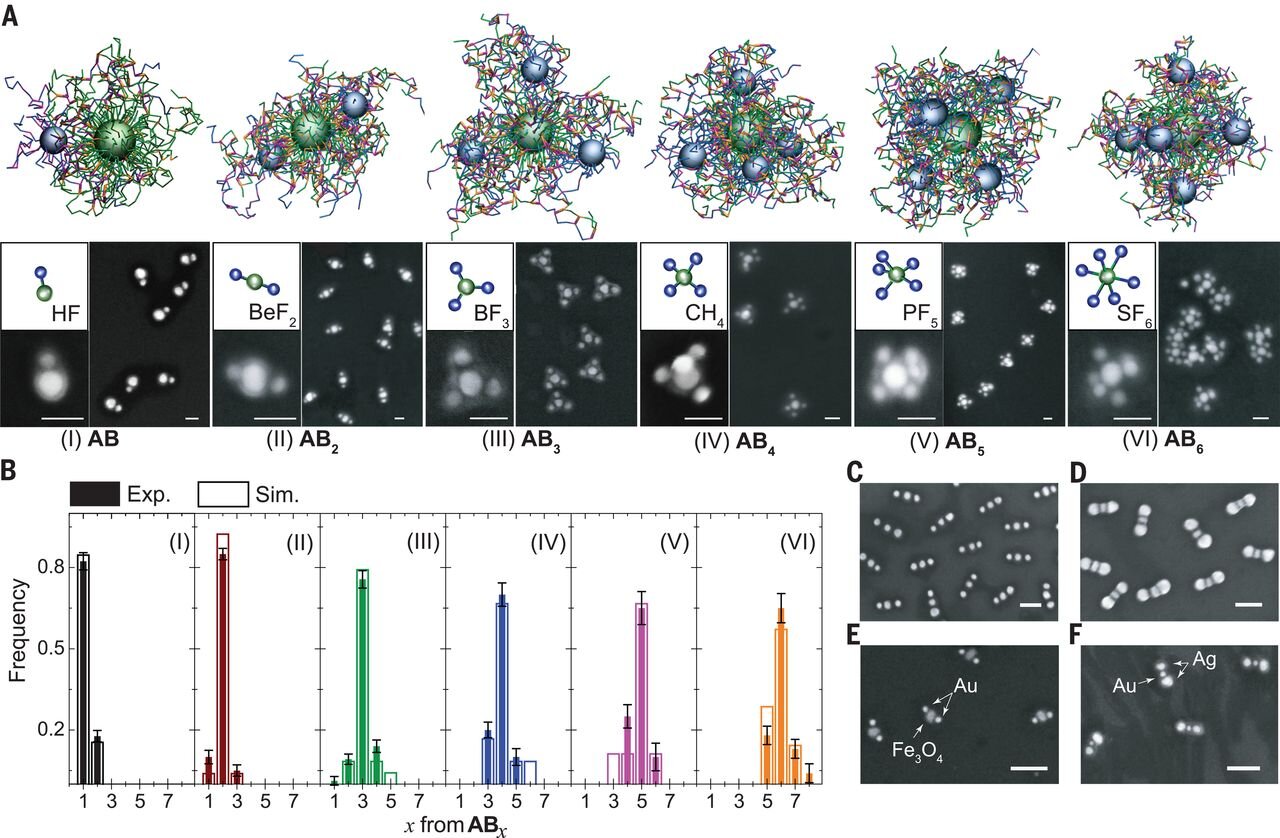 Experimental and simulation study of the CM formation.

For round nanoparticles, chemists use a ligand shell to determine the cluster's final shape. There are also modified packing approaches to create more complex products. In this new effort, the researchers have come up with a way to create targeted nanoparticle clusters that can be used to produce high-yield products.

Their approach is based on the delocalized strategy, which means it uses polymer-mediated reactions and interactions as a means of binding the elements that are used to make the clusters—in their case, two kinds of gold particles that are used to create spherical nanoparticles.

It also involves grafting co-polymers (either base or acid) to the surface of the particles. Doing so allows for controlling the arrangement and number of reactive groups, and the addition of a chain on the exterior of the resultant cluster is used for repulsion between shells.

Notably, the bonding process during synthesis is controlled by ligand length while the arrangement of the particles that are bonded is controlled by electrostatic repulsions. Both parameters can be fine-tuned to customize the clusters that are formed.

Gang suggests the new method should allow for the assembly of desired classes of nanoparticles in a relatively easy manner. He also notes that the method can be modified for use in creating more complex clusters and thus nanoparticle-based materials.