Single Photons From a Silicon Chip

Physicists from the Helmholtz-Zentrum Dresden-Rossendorf (HZDR) and TU Dresden have designed a silicon-based light source to generate single photons that propagate well in glass fibers.

Quantum technology holds great promise: Just a few years from now, quantum computers are expected to revolutionize database searches, AI systems, and computational simulations. Today already, quantum cryptography can guarantee absolutely secure data transfer, albeit with limitations. The greatest possible compatibility with our current silicon-based electronics will be a key advantage. And that is precisely where physicists from the Helmholtz-Zentrum Dresden-Rossendorf (HZDR) and TU Dresden have made remarkable progress: The team has designed a silicon-based light source to generate single photons that propagate well in glass fibers.

Quantum technology relies on the ability to control the behavior of quantum particles as precisely as possible, for example by locking individual atoms in magnetic traps or by sending individual light particles – called photons – through glass fibers. The latter is the basis of quantum cryptography, a communication method that is, in principle, tap-proof: Any would-be data thief intercepting the photons unavoidably destroys their quantum properties. The senders and receivers of the message will notice that and can stop the compromised transmission in time.

This requires light sources that deliver single photons. Such systems already exist, especially based on diamonds, but they have one flaw: “These diamond sources can only generate photons at frequencies that are not suitable for fiber optic transmission,” explains HZDR physicist Dr. Georgy Astakhov. “Which is a significant limitation for practical use.” So Astakhov and his team decided to use a different material – the tried and tested electronic base material silicon.

To make the material generate the infrared photons required for fiber optic communication, the experts subjected it to a special treatment, selectively shooting carbon into the silicon with an accelerator at the HZDR Ion Beam Center. This created what is called G-centers in the material – two adjacent carbon atoms coupled to a silicon atom forming a sort of artificial atom. 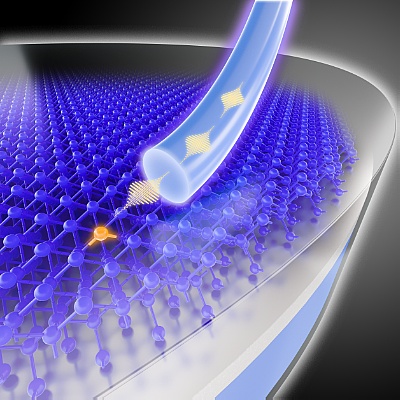 Schematic representation of a single defect in a silicon wafer created by the implantation of carbon atoms, which emits single photons in the telecom O-band (wavelength range: 1260 to 1360 nanometers) coupled to an optical fiber

When radiated with red laser light, this artificial atom emits the desired infrared photons at a wavelength of 1.3 micrometers, a frequency excellently suited for fiber optic transmission. “Our prototype can produce 100,000 single photons per second,” Astakhov reports. “And it is stable. Even after several days of continuous operation, we haven’t observed any deterioration.” However, the system only works in extremely cold conditions – the physicists use liquid helium to cool it down to a temperature of minus 268 degrees Celsius.

“We were able to show for the first time that a silicon-based single-photon source is possible,” Astakhov’s colleague Dr. Yonder Berencén is happy to report. “This basically makes it possible to integrate such sources with other optical components on a chip.” Among other things, it would be of interest to couple the new light source with a resonator to solve the problem that infrared photons largely emerge from the source randomly. For use in quantum communication, however, it would be necessary to generate photons on demand.

Light source on a chip

This resonator could be tuned to exactly hit the wavelength of the light source, which would make it possible to increase the number of generated photons to the point that they are available at any given time. “It has already been proven that such resonators can be built in silicon,” reports Berencén. “The missing link was a silicon-based source for single photons. And that’s exactly what we’ve now been able to create.”

But before they can consider practical applications, the HZDR researchers still have to solve some problems – such as a more systematic production of the new telecom single-photon sources. “We will try to implant the carbon into silicon with greater precision,” explains Georgy Astakhov. “HZDR with its Ion Beam Center provides an ideal infrastructure for realizing ideas like this.”

Read the original article on Helmholtz-Gemeinschaft.