Why Do Hospital Germs Bind More Strongly To Certain Surfaces Than To Others?

Results from studies in both experimental and theoretical physics may help to improve antibacterial surfaces. The research work was recently published in the journal Nanoscale.

Staphylococcus aureus bacteria are one of the most common causes of infections acquired by patients during a stay in hospital. These pathogens are particularly problematic because they can form robust biofilms on both natural and artificial surfaces from which they are very difficult to remove. "The individual bacteria within these biofilms are effectively protected from attack by antibiotics or by the human immune system. That's why it can be so dangerous when these bacteria colonize medical implants as they can then cause serious post-operative infections," explains Karin Jacobs, Professor of Experimental Physics at Saarland University. It is therefore crucial to try and prevent these biofilms from forming in the first place. 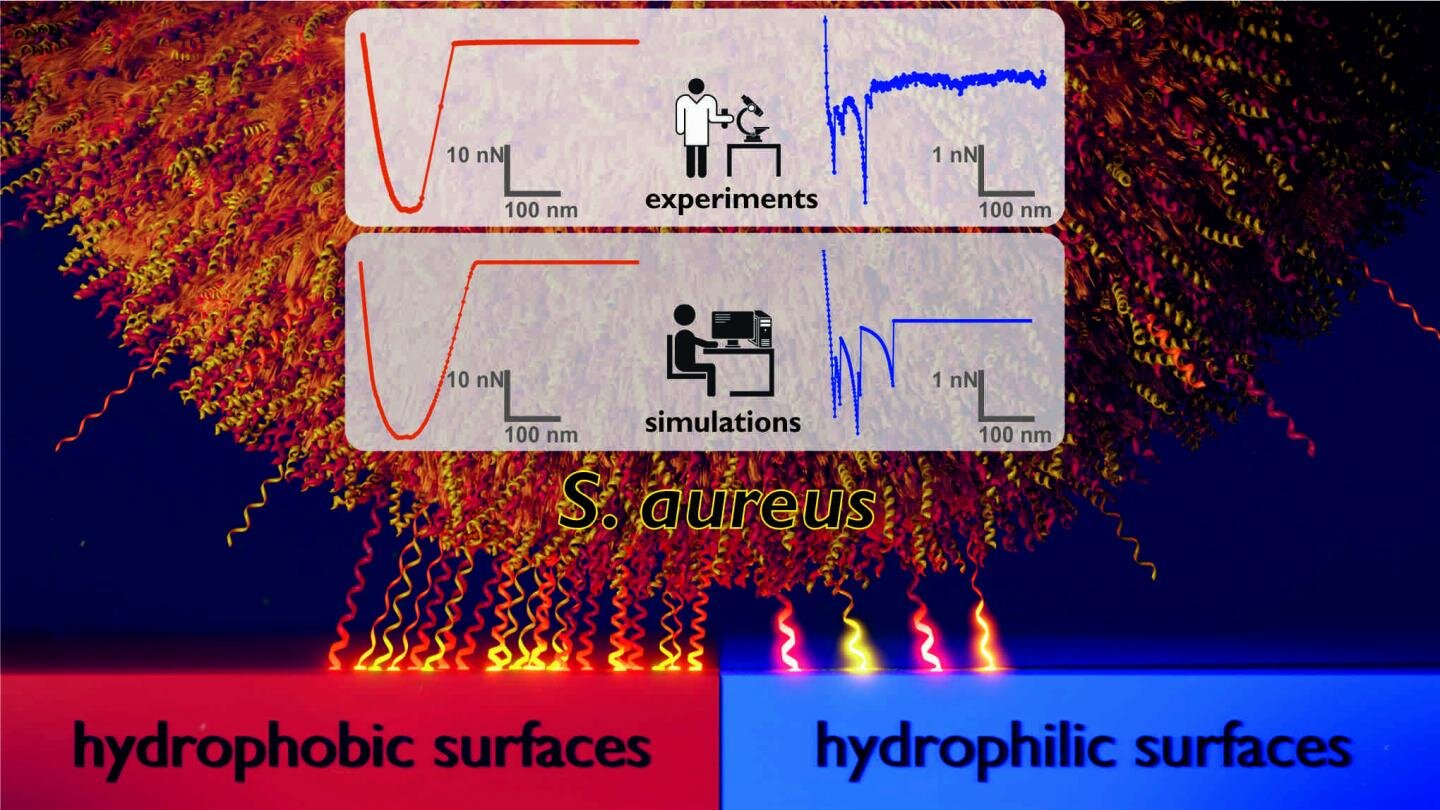 Model of the adhesion mechanism by which the bacterium Staphylococcus aureus binds to hydrophobic ('low-energy') surfaces (left) compared with hydrophilic ('high-energy') surfaces (right). On the left, a large number of cell wall molecules (shown here as tiny compressible springs) are involved in binding the cell to the hydrophobic surface. On the hydrophilic surface shown on the right, far fewer molecules are involved. The results were obtained by a team of experimental and theoretical physicists at Saarland University who performed computational Monte Carlo simulations of force-distance data from atomic force microscopy experiments.

However, to be able to influence biofilm growth, the researchers had to understand the mechanisms by which the bacteria adhere to different materials. Using a scanning atomic force microscope, they pressed the minute bacterial cells onto different types of surfaces and then determined the force needed to lift the adhered cells from the surface. This experimental configuration allowed the researchers to record what are known as force-distance curves. "We used extremely smooth silicon surfaces as model surfaces. In one set of experiments, the silicon surfaces were prepared so that they had high water-wettability; in another set of experiments they were treated to be highly hydrophobic. We were able to show that the bacterial cells adhered far more strongly to the hydrophobic surfaces, from which water simply rolled off, than on the hydrophilic (water-wettable) surfaces," explains Karin Jacobs.

But it is not just the magnitude of the forces that differ between the two surface types, so too do the shapes of the force-distance curves (see figure). "On the hydrophobic surfaces, we see very smooth curves with a characteristic cup shape. On the hydrophilic surfaces, in contrast, we observe force-distance curves with a very jagged profile," says Professor Jacobs.

In order to understand these results, the dynamics of these complex systems were modeled using Monte Carlo simulations that were carried out in the research group led by Professor Ludger Santen, Professor of Theoretical Physics at Saarland University. The model treats the bacterial cell as a rigid sphere and the molecules in the cell wall that tether the cell to the surface as minute springs. "It turns out that in order to reproduce the experimental results, the role played by the random (stochastic) nature of the molecular binding process is more important than trying to increase the complexity of the model. We have now uncovered why the bacteria cells behave so differently on different types of surfaces. On hydrophobic surfaces, a large number of the cell wall proteins adhere to the surface, which results in a strong binding force and yields a smooth force-distance curve," explains Ludger Santen.

Due to the different shapes of the force-distance curves, the physicists suppose that on a hydrophilic surface fewer cell wall proteins are involved in the binding process because these molecules first have to overcome a potential barrier, which effectively reduces the number of protein macromolecules that can tether the cell to the surface. "The potential barrier to adhesion on hydrophilic surfaces is relatively high, so only a few of the cell wall proteins are able to overcome this energy barrier in a particular time. On hydrophobic surfaces, however, the barrier is negligibly small, so that many cell wall proteins can adhere directly to the surface," explains Dr. Christian Spengler, who performed the experiments in the study.