Nanostructures with a Unique Property

Nanoscale vortices known as skyrmions can be created in many magnetic materials. For the first time, researchers at PSI have managed to create and identify antiferromagnetic skyrmions with a unique property: critical elements inside them are arranged in opposing directions.

Scientists have succeeded in visualising this phenomenon using neutron scattering. Their discovery is a major step towards developing potential new applications, such as more efficient computers. The results of the research are published today in the journal Nature.

Whether a material is magnetic depends on the spins of its atoms. The best way to think of spins is as minute bar magnets. In a crystal structure where the atoms have fixed positions in a lattice, these spins can be arranged in criss-cross fashion or aligned all in parallel like the spears of a Roman legion, depending on the individual material and its state.

Under certain conditions it is possible to generate tiny vortices within the corps of spins. These are known as skyrmions. Scientists are particularly interested in skyrmions as a key component in future technologies, such as more efficient data storage and transfer. For example, they could be used as memory bits: a skyrmion could represent the digital one, and its absence a digital zero.

As skyrmions are significantly smaller than the bits used in conventional storage media, data density is much higher and potentially also more energy efficient, while read and write operations would be faster as well. Skyrmions could therefore be useful both in classical data processing and in cutting-edge quantum computing.

Another interesting aspect for the application is that skyrmions can be created and controlled in many materials by applying an electrical current. "With existing skyrmions, however, it is tricky to move them systematically from A to B, as they tend to deviate from a straight path due to their inherent properties," explains Oksana Zaharko, research group leader at PSI. 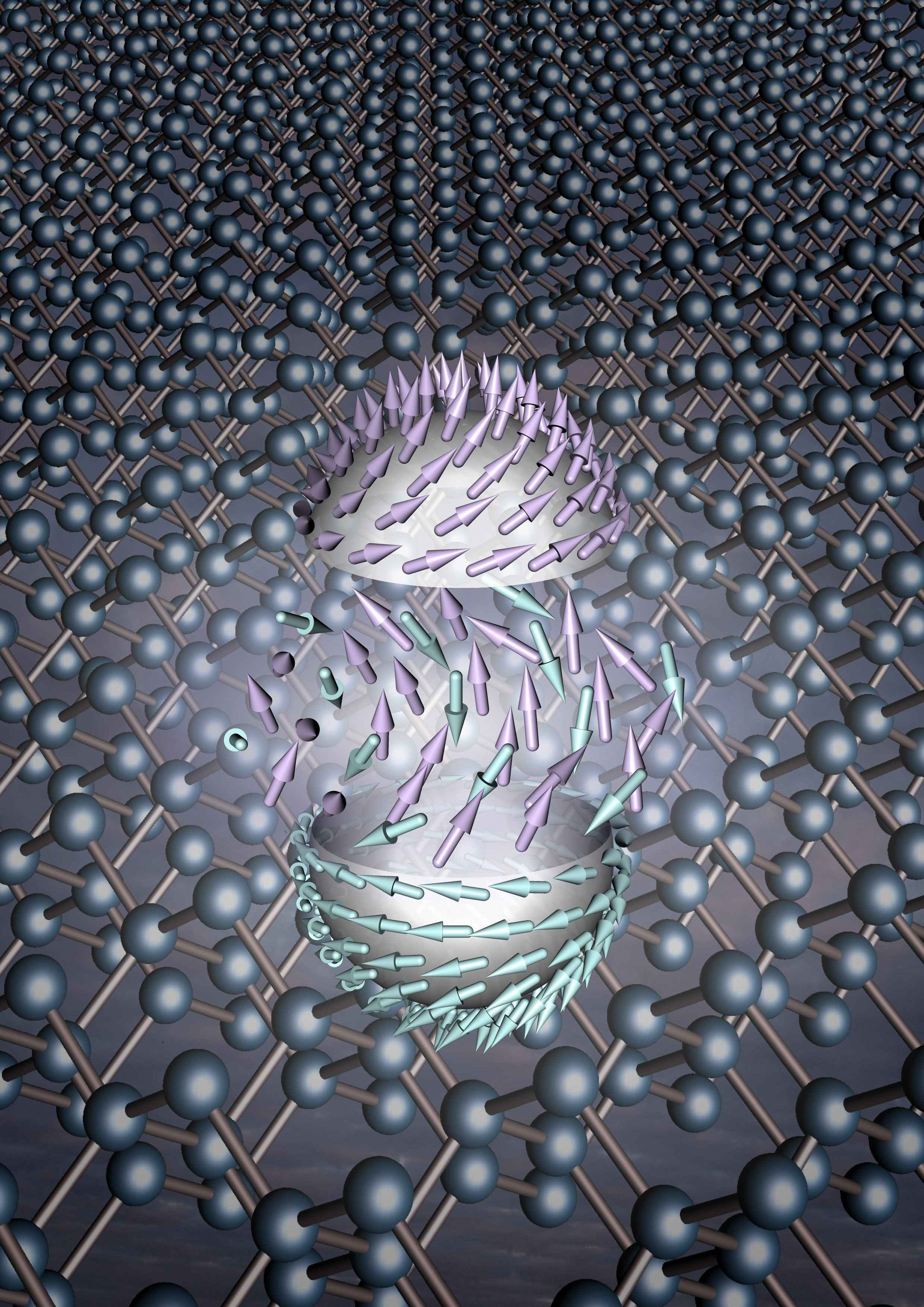 Skyrmions are nanoscale vortices in the magnetic alignment of atoms. For the first time, PSI researchers have now created antiferromagnetic skyrmions in which critical spins are arranged in opposing directions. This state is shown in the artist's impression above.

Working with researchers from other institutions, Dr Zaharko and her team have now created a new type of skyrmion and demonstrated a unique characteristic: in their interior, critical spins are arranged in opposite directions to one another. The researchers therefore describe their skyrmions as antiferromagnetic.

In a straight line from A to B

"One of the key advantages of antiferromagnetic skyrmions is that they are much simpler to control: if an electrical current is applied, they move in a simple straight line," Zaharko comments. This is a major advantage: for skyrmions to be suitable for practical applications, it must be possible to selectively manipulate and position them.

The scientists created their new type of skyrmion by fabricating them in a customised antiferromagnetic crystal. Zaharko explains: "Antiferromagnetic means that adjacent spins are in an antiparallel arrangement, in other words one pointing upwards and the next pointing downwards. So what was initially observed as a property of the material we subsequently identified within the individual skyrmions as well."

Several steps are still needed before antiferromagnetic skyrmions are mature enough for a technological application: PSI researchers had to cool the crystal down to around minus 272 degrees Celsius and apply an extremely strong magnetic field of three tesla – roughly 100,000 times the strength of the Earth's magnetic field.

Neutron scattering to visualise the skyrmions

And the researchers have yet to create individual antiferromagnetic skyrmions. To verify the tiny vortices, the scientists are using the Swiss Spallation Neutron Source SINQ at PSI. "Here we can visualise skyrmions using neutron scattering if we have a lot of them in a regular pattern in a particular material," Zaharko explains.

The general consensus in the research community is that once individual antiferromagnetic skyrmions can be created at room temperature, a practical application will not be far off.