The world of nanotechnology is a place where materials so small they’re undetectable to the human eye are found in products we use every day, from sunscreen to cell phone batteries.

That’s a good thing. But nanomaterials may have hazardous side effects to the environment or to human health. And because these constituents are so tiny, they demand a new way to study the effects they may have.

That’s where the Center for Sustainable Nanotechnology (CSN) comes in. A multi-institutional venture that includes the University of Iowa, the CSN recently obtained a renewed round of funding from the U.S. National Science Foundation through 2025.

With its initial grant in 2012, the CSN made some noteworthy strides in understanding how materials behave at the nanoscale, a subatomic world where a nanometer is one-billionth the width of a human hair. One example: nano metal oxides, the materials in rechargeable batteries in many cell phones. CSN researchers learned that rechargeable batteries release metal cations (ions with a positive charge), such as cobalt, in water, which can be harmful to aquatic organisms. 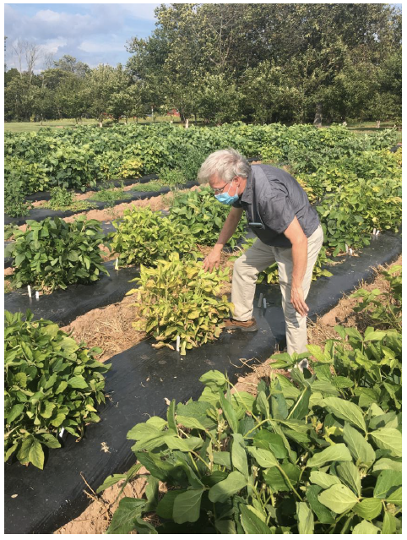 Wade Elmer, Center for Sustainable Nanotechnology (CSN) affiliate and vice director of plant pathology and ecology with the Connecticut Agricultural Experiment Station, observes soybeans used is part of an ongoing experiment where CSN materials are being used to suppress disease. The University of Iowa is part of the CSN, a multi-institutional venture that obtained renewed funding from the U.S. National Science Foundation.

A group led by Sara E. Mason, associate professor in the Department of Chemistry and lead CSN member at Iowa, determined through sophisticated modeling how the metal ions dissolve in water. Building on that knowledge, her team tested how different metals mixed at varying concentrations affected the amount of toxic metal cations that were released.

The modeling tests were akin to finding the ideal recipe, one that would contain the right mix of metals for highly functioning rechargeable batteries with minimized ill effects on the environment.

“If we can use modeling to screen and predict both the battery function and the dissolution, then that gives us a real advantage,” Mason says. “We’re not just blindly trying to guess. We’re using that chemical guidance to improve.”

With the renewed funding, Mason’s group will work with a new partner, the Connecticut Agricultural Experiment Station. There, researchers discovered that copper oxide nanoparticles sprinkled on soybean plants with fungal infection led to the plants recovering and growing healthily once more.

“We saw the opportunity to use modeling because not all the copper nanomaterials had the same effect,” Mason explains. “It had to do with the composition of the copper oxide nanomaterials. They were comparing two families of materials, an oxide and a phosphate.”

The results have been accepted by the journal Nature Nanotechnology.

Mason and her research group plans to continue work on learning about nanomaterials in batteries and on plant health. She is seeking undergraduates to join her team.

“It’s this opportunity for my students in the computational chemistry group at Iowa to do research that is impactful and relevant to investigate these really big problems that no one team could work on individually,” she says. “It’s the orchestra versus the soloist.”