Superconductivity with a Twist Explained

Leiden physicists and international colleagues from Geneva and Barcelona have confirmed the mechanism that makes magic-angle graphene superconducting. This is a key step in elucidating high-temperature superconductivity, a decades-old mystery central to physics, which may lead to technological breakthroughs.

Magic-angle materials form a surprising recent physics discovery. 'You take a sheet of graphene', says Sense Jan van der Molen, referring to the two-dimensional material made of carbon atoms in a hexagonal pattern, 'then you put another layer on top of it and twist the latter by 1 degree. This way, you suddenly get a superconductor.'

In the journal Nature Physics, they show that the slight twist in graphene causes the electrons to slow down enough to sense each other. This enables them to form the electron pairs necessary for superconductivity.

How can such a small twist make such a big difference? This is connected with moiré patterns, a phenomenon seen in the everyday world. For instance, when two chicken-wire fences are in front of another, one observes additional dark and bright spots, caused by the varying overlap between the patterns. Such moiré patterns (from the french moirer, to crease) generally appear where periodical structures overlap imperfectly.

Twisted bilayer graphene is just such a situation: the interplay between the two hexagonal carbon lattices, slightly twisted, causes a much larger hexagonal moiré pattern to emerge. By creating this new periodicity, the interaction between the electrons changes, yielding these ‘slow’ electrons. In numerous papers, clear signs of the superconductivity have been measured, but the intermediate step of slow electrons has been much harder to pin down.

'You need to have good samples', Van der Molen explains the success. Fortunately, the co-authors from Barcelona are known to make high-quality samples. 'Next, you need to know exactly where to look'. Even in a good sample, the correct twist angle is only achieved in small patches of double-layer graphene. 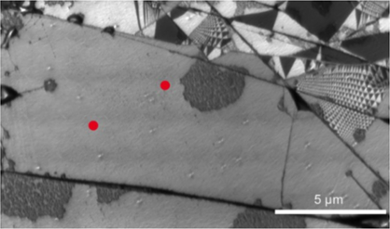 LEEM image of the sample. The triangles on the right indicate a low angle patch.

Then, a group in Geneva used nano-ARPES, an imaging technique, to demonstrate the slowing down of the electrons. Allan: 'Many groups tried hard to do that. Only one other group succeeded, and they have a parallel publication.'

Elucidating and then optimising this type of superconductivity could also lead to numerous technological applications, ranging from lossless energy transport to hypersensitive light detectors.

In fact, Michiel de Dood, also at Leiden, is now pioneering such detectors. Van der Molen: 'It's fundamental work, but we keep our eyes open for applications too.'