Scientists at the University of Groningen created a light-harvesting system that is made from double-walled nanotubes that self-assemble from molecular building blocks. One light-harvesting nanotube contains thousands of molecules. And while the tubes look alike and have very similar optical properties, there are big differences at the level of the molecules. So, how can they still behave in the same way? By simulating the interaction of the atoms inside the nanotubes and analyzing their behavior, the scientists managed to solve this riddle. The light energy causes a vibration in the nanotubes, which is spread out over hundreds of molecules. They vibrate as one because they are linked by connecting forces and are all sensitive to approximately the same frequency. An analogy is the vibration of a tuning fork, which can be transferred to a second fork that has a similar frequency. The results show that functional materials do not have to be highly ordered: as long as the building blocks are firmly linked, they can work in unison.

Scientists typically prefer to work with ordered systems. However, a diverse team of physicists and biophysicists from the University of Groningen found that individual light-harvesting nanotubes with disordered molecular structures still transport light energy in the same way. By combining spectroscopy, molecular dynamics simulations and theoretical physics, they discovered how disorder at the molecular level is effectively averaged out at the microscopic scale. The results were published on 26 September in the Journal of the American Chemical Society.

The double-walled light-harvesting nanotubes self-assemble from molecular building blocks. They are inspired by the multi-walled tubular antenna network of photosynthetic bacteria found in nature. The nanotubes absorb and transport light energy, although it was not entirely clear how. ‘The nanotubes have similar sizes but they are all different at the molecular level with the molecules arranged in a disordered way,’ explains Maxim Pshenichnikov, Professor of Ultrafast Spectroscopy at the University of Groningen.

Björn Kriete, a PhD student in Pshenichnikov’s group, used spectroscopy to measure how light-harvesting systems, each consisting of a double-wall nanotube composed of a few thousand molecules, behaved. ‘We examined around fifty of these systems and found that they had very similar optical properties despite showing significant differences at the molecular level.’ Measuring individual light-harvesting systems requires the use of the latest single-molecule spectroscopy techniques. Earlier studies only looked at bulk material that contains millions of these systems.

So, how can disorder at the molecular level be reconciled with individual systems’ very ordered responses to light? To answer this question, Pshenichnikov received help from both the Molecular Dynamics group and the Theoretical Physics group at the University of Groningen. Postdoctoral researchers Riccardo Alessandri and Anna Bondarenko were responsible for simulating the nanotube system in solution. ‘It was quite a challenge to simulate a system with thousands of molecules, to try to compute the disorder in an efficient way,’ Alessandri explains. Overall, the simulation contained around 4.5 million atoms.

In the end, the simulation revealed a bigger picture that was in agreement with the experimental results obtained by Pshenichnikov, but it also revealed additional molecular detail. This helped Jasper Knoester, Professor of Theoretical Physics, to connect all the dots. He recognized a pattern in the data that is referred to as ‘exchange narrowing’. This effect is responsible for averaging out small differences at the molecular level. ‘You can compare it to the classical experiment with tuning forks in which a vibration in one fork can transfer to a second fork, if it is tuned to roughly the same frequency,’ Knoester explains. 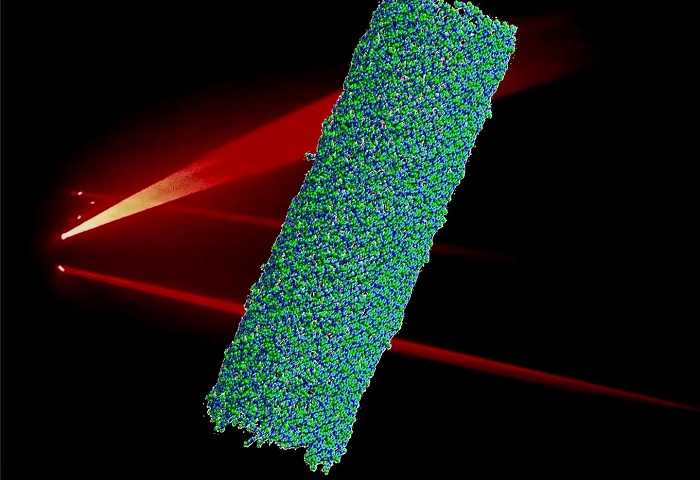 The energy that is harvested by the light sensitive systems is transported in the form of excitons, which are quantum-mechanical wave functions, comparable to vibrations. Each exciton spreads out over 100 to 1,000 molecules. Pshenichnikov: ‘These molecules are not ordered, but they are linked through dipole-dipole coupling.’ This linkage allows the molecules that make up the nanotubes to vibrate together. Minor differences between them are averaged out, which results in light-harvesting systems that have similar optical properties.

It is now clear how ordered optical behaviour can emerge from a disordered molecular structure. The link between the molecules is vital. Pshenichnikov: ‘Think of a poorly trained bricklayer, who just puts bricks together in no particular pattern. If they are cemented to each other well, you still end up with a strong wall.’ For the nanotubes, this means that a certain amount of disorder is quite acceptable in these light-harvesting systems. ‘I believe that the implications are even wider,’ says Pshenichnikov. ‘The next step is to investigate how these properties can emerge in systems and use this in the design and creation of new functional materials.’