Graphite Instead of Gold: Thin Layers for Better Hydrogen Cars

Electric cars which can be filled up within five minutes, reach ranges like a diesel and yet drive "cleanly": This is already being achieved by hydrogen fuel cell vehicles today. However, so far they are still rare and expensive. Apart from efficiency problems, this is due, among other things, to one core component: Gold-coated bipolar plates (BiP) in fuel cells are expensive and complex to manufacture. The Fraunhofer Institute for Material and Beam Technology IWS Dresden, the German automotive group Daimler and the Finnish steel company Outokumpu Nirosta have now developed an economical alternative for rapid mass production.

To this end, scientists at the Fraunhofer IWS have developed a technology that facilitates the continuous production of bipolar plates. Instead of gold, they coat the bipolar plates with a very thin carbon coating. This concept is well suited for mass production and can significantly reduce manufacturing costs. In addition, it contributes to the development of environmentally friendly vehicles.

"If the automotive industry is talking about alternative drive concepts today, it usually means battery electric driving", explains IWS Director Prof. Christoph Leyens. "Fuel cells, however, could offer an attractive technological solution for application scenarios such as trucks requiring a long range. We therefore work closely together with our industrial partners in order to enable more cost-effective and efficient fuel cells".

"Engineers are idealists, too, and so we are particularly passionate about this project," emphasizes Dr. Teja Roch, scientist at the IWS. "We are delivering a cornerstone for climate-neutral mobility beyond classic combustion engines. However, the project will only work if the new process is profitable in practice. "Our technology offers the potential to significantly reduce the production costs of fuel cells." 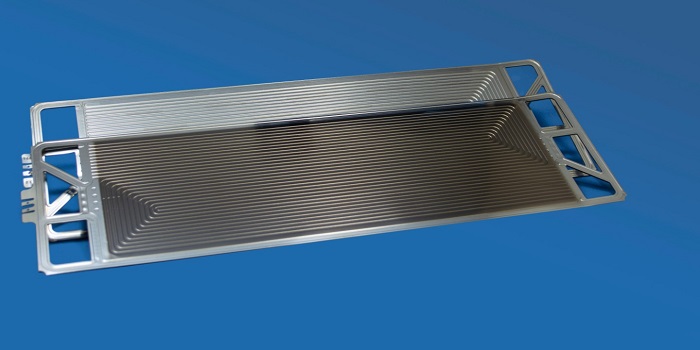 The Daimler bipolar plate (above) is coated with a carbon layer (below), reducing contact resistance and simultaneously increasing corrosion resistance.

A fuel cell - how does it work?

Fuel cells operate like mini power plants: They are supplied with hydrogen and oxygen and use them to generate water, electricity and heat in a chemical reaction. Various designs can be considered. A widely used model is the PEM fuel cell. PEM fuel cells contain stacks consisting of many individual cells, each with a proton exchange membrane (PEM) in the middle. To the right and left of this membrane there are electrodes with catalysts, a gas diffusion layer (GDL) and bipolar plates on both sides. Hydrogen and oxygen flow through these plates into the cell. The plates consist of two stainless steel half plates each, on which special structures for gas flow and heat dissipation are embossed in a forming process and subsequently welded together.

However, since steel surfaces only poorly conduct electricity, bipolar plates are often coated with gold to prevent rust formation. Above all, however, the precious metal ensures that the current can easily flow, meaning that the contact resistance between the gas diffusion layer and the bipolar plate remains low. "However, gold is known to be expensive," says Teja Roch, outlining a problem with this frequently used solution. "In addition, the stainless steel plates for the plates are first formed and welded together and subsequently coated in stacks. This is a rather costly and time-consuming process."

Therefore, IWS researchers and their partners from the automotive and steel industry have explored new paths in the course of the joint project "miniBIP II" funded by the German Federal Ministry of Economics and Technology. Instead of using gold, they have coated the approximately 50 to 100 micrometers (thousandths of a millimeter) thin steel sheets with a graphite-like layer only a few nanometers (millionths of a millimeter) thick. They use physical vapor deposition (PVD) for this process. In this technology, an electric arc in a vacuum chamber first vaporizes the carbon, which is subsequently deposited on the stainless steel in a highly pure, uniform and very thin layer. 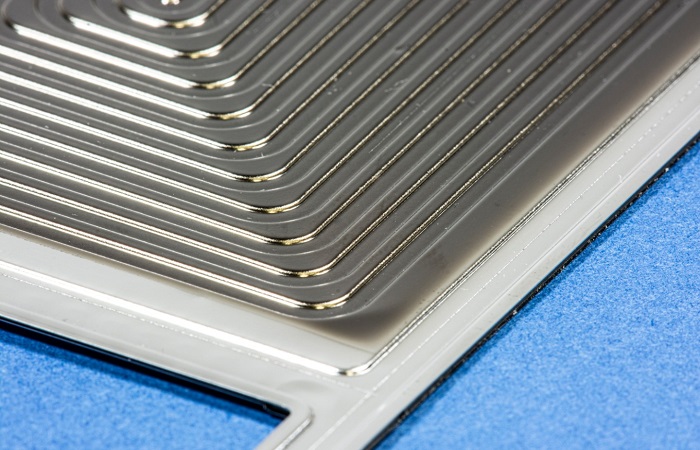 The approximately 50 to 100 micrometer thin steel sheets are coated with a graphite-like layer just a few nanometers thick.

Coating costs reduced by half

Even in the pre-series stage, this carbon layer achieves a contact resistance similar to the gold coating. In other words, if the engineers further improve their process up to mass production, the coating will conduct electricity at least as well as the precious metal, possibly even better - at half the cost of coating. Fraunhofer IWS scientists are convinced that this will contribute to a new generation of more efficient fuel cells with higher electrical yield.

In addition, the innovative Fraunhofer technology also promises a higher production speed. The carbon layer is so extremely thin that the coating process itself takes only a few seconds. In addition, stack producers will in future be able to coat entire sheet metal rolls "non-stop" before forming. After all, the Fraunhofer coating is so durable that it can withstand the forming and welding process. "This enables a continuous manufacturing process and thus a much higher production throughput than ever before," explains Dr. Roch.

Fuel cell vehicles with the range of a diesel

Such improved and lower-cost fuel cells are particularly important for mobile use. They are particularly suitable for environmentally friendly cars, buses and long-range trucks that need to be refueled quickly. The "miniBIP II" project thus contributes to the Federal Government's recently reaffirmed strategy of making Germany a pioneer of future hydrogen technologies. Some market analysts such as IDTechEx and McKinsey expect that by 2030 several million vehicles with fuel cell technology will already be on the road worldwide. The Fraunhofer-Gesellschaft has taken up this challenge. In a joint initiative, the involved institutes are providing their "expertise to support the hydrogen age". Fraunhofer IWS participates in this network as well.

Read the original article on Fraunhofer Institute for Material and Beam Technology IWS.