Invisibility is a superior self-protection strategy of long-standing interest in academia and industry, although the concept is thus far most popularly encountered in science fiction. 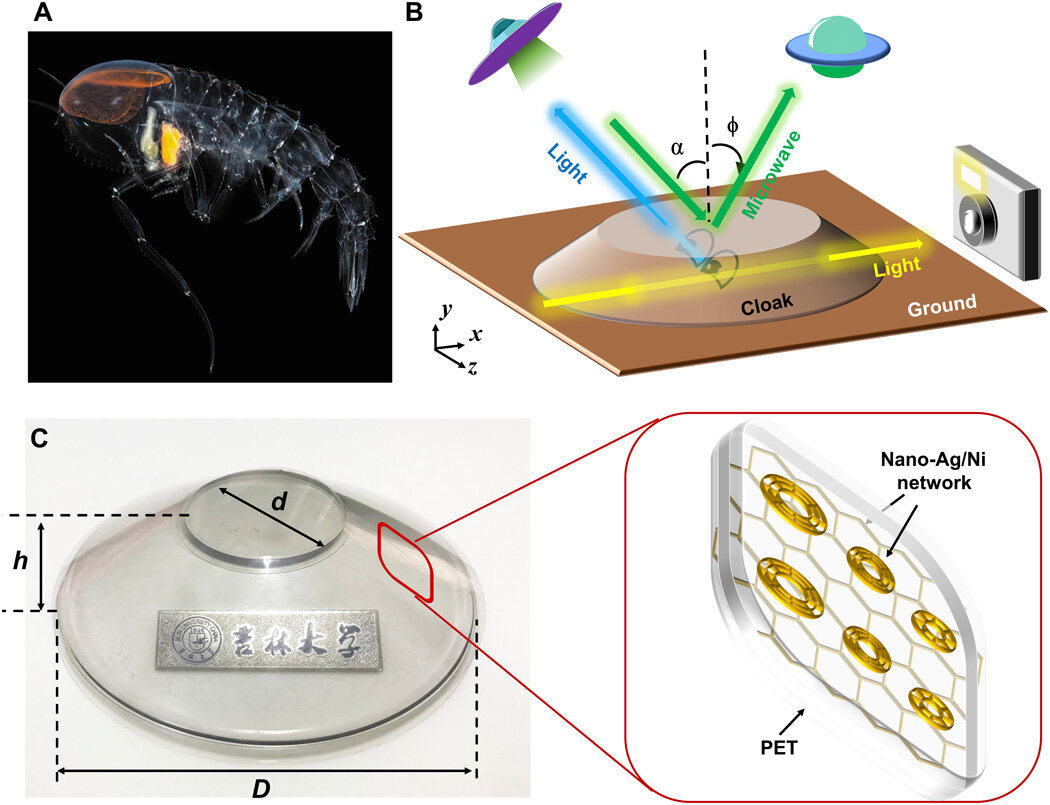 Biological inspiration, schematic view, and practical sample of an optically transparent microwave invisibility cloak. (A) Photo of the hyperiid amphipod crustacean Cystisoma, which lives in a midwater oceanic environment. Photo credit: David Liittschwager, used with permission. (B) Schematic of the optically transparent microwave invisibility cloak. This cloak can conceal objects with preserved phases and microwave amplitudes (green beams with incident angle α and reflected angle ϕ). At the same time, the cloak can ensure that internal observers see external aircraft clearly (blue beams) and can decrease the optical scattering (yellow beams). (C) Example of the optically transparent microwave invisibility cloak. The metallic badge with the words “Jilin University” represents an object concealed inside. The enlarged section presents a schematic view of the metasurfaces composed of nano-Ag/Ni networks.

Allowing the passage of light through the body is a superior self-defense strategy in the ocean for midwater organisms. For example, the amphipod crustacean Cystisoma is mostly transparent aside for some necessary organs including eyes to avoid detection by predators. However, a few predators can still detect and successfully attack transparent prey due to their cross-spectral vision. If prey could conceal themselves completely by balancing the prey-predator interaction to overcome the cross-spectral vision of predators, their survival rates will be much higher. Xu et al. were bioinspired by this ecological relationship when they proposed a concept of cross-wavelength invisibility that simultaneously integrated longwave cloaking and shortwave transparency. The new strategy complements existing mainstream strategies of chameleon-like adaptive camouflage and the wave-bypassing invisibility cloak. In this work, scientists break the existing ecological relationship by attempting to hide the transparent prey from the cross-spectral vision of their predators. As a result, this philosophy of invisibility will be of significance for practical stealth technologies. 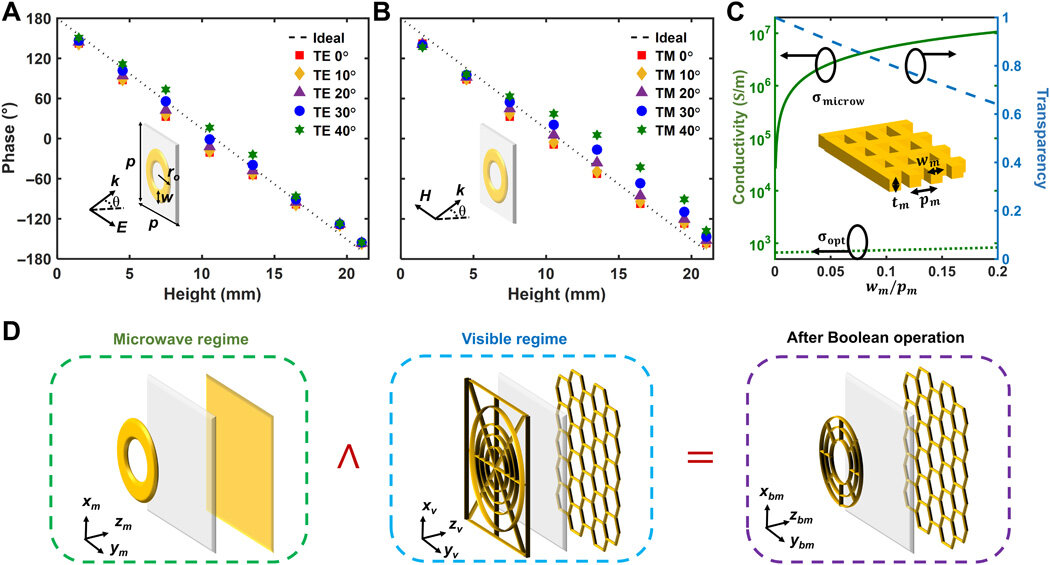 Boolean metamaterial design procedure for an optically transparent microwave cloak. (A and B) Schematic of the metasurface unit cell for the microwave regime and the phase shifts under different incident angles: (A) for TE-polarized incidence and (B) for TM-polarized incidence. The dotted line indicates the theoretically ideal phase compensation value at α=10°. (C) Cross-scale dispersion engineering with silver nanostructures. The silver ( ωp = 1.39 × 1016 s−1 and ωc = 3.22 × 1013 s−1) structure has a geometry of tm = 8 μm and pm = 200 μm, and wm/pm varies from 0.001 to 0.2. σmicrow and σopt represent the conductivities at 7 GHz and 580 nm, respectively. The underlying substrate is not considered here. (D) Boolean multiplication (denoted by ∧) performed to merge the structures with single-band engineered dispersion into an integrated metastructure with cross-scale engineered dispersion. M(xm, ym, zm), V(xv, yv, zv), and BM(xbm, ybm, zbm) are the coordinates for the microwave regime, the visible regime, and the final structure, respectively.

Constructing a device of invisibility

The strategy proposed here aims to realize concepts that have so far remained rooted in science fiction. For instance, Xu et al. envision their invisibility philosophy to contribute to the development of a futuristic, transparent stealth aircraft in the lab, where pilots will be able to freely view their surroundings without detection via the microwave radar system. The team constructed the experimental device using microscopic silver/nickel wires to ensure extremely low optical conductivity with nanoimprinting fabrication. The results demonstrated an optical transparency from 400 nm to 760 nm, and significantly reduced scattering in the microwave regime from 6 to 10 GHz. The team could penetrate the transparent cloak with visible light (blue and yellow rays) with negligible loss, allowing the internal observer to freely view outside. The team engineered the optically transparent microwave invisibility cloak with two metasurfaces imprinted on flexible polyethylene terephthalate (PET) films and isolated by a curved PET spacer. The internal layer of the metasurface acted as a perfect elastic conductor (PEC) boundary, while external ring resonators on the metasurface provided proper phase compensation and amplitude preservation effects. 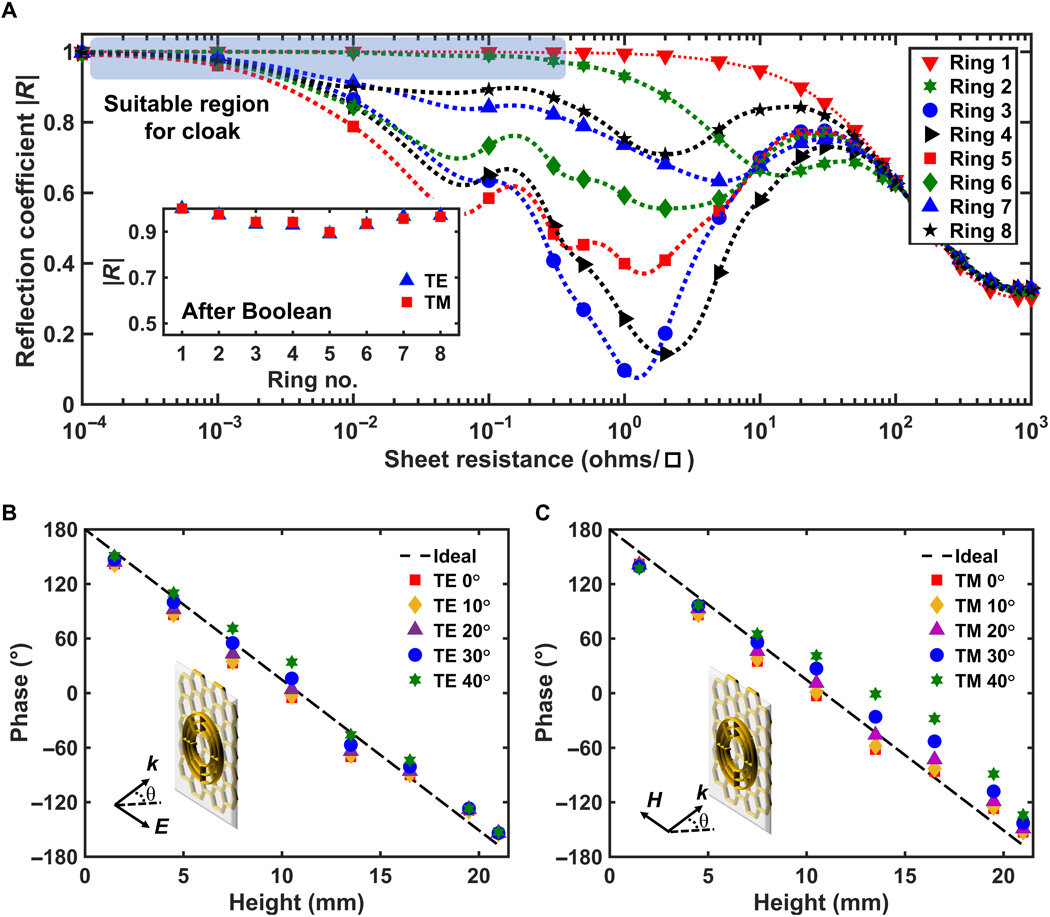 Phase and amplitude response of ring resonators after the Boolean procedure. (A) Amplitude attenuation of a reflected wave for various sheet resistances. The amplitude is averaged under TE polarization incidence (θ = 20 ° and 40°), and the dotted curves are fits from simulations. The inset shows the average magnitude of ring resonators for the practical structure after the Boolean procedure with θ = 0°, 10°, 20°, 30°, and 40° for TE and TM illumination at 7 GHz. (B and C) Phase responses for TE and TM polarization.

Xu et al. engineered the electromagnetic response for microwave invisibility according to the generalized Snell's law and used eight kinds of ring resonators to build the cloak. Designing unit cells alone for microwave invisibility was insufficient to realize cross-wavelength invisibility. Therefore, the team adopted a Boolean metamaterial design strategy to merge meta-structures to achieve integrated single-band functionality. To accomplish this, they integrated the meta-structures for the microwave regime and visible regime by adopting a Boolean logical multiplication (denoted by ∧ or AND) in an integrated circuit. The integrated metastructures were equal to the macroscopic metallic network formed by mapped microscopic metal wires exhibiting an extremely high local electrical conductivity while preserving an extremely low global optical conductivity.

To construct the optically transparent microwave cloak, the team chose an advanced nanoimprinting technique that provided a large-area metasurface to conceal macroscopic objects and enable high-precision fabrication of the microscopic metal wires at the microscale. They conducted optical characterization of the outer layer using scanning electron microscopy (SEM). The scientists developed the outline of the microscopic ring resonator with metallic circular wires and oriented several shorting wires along the radial direction to connect the circular metal wires. The team conducted a field test to experimentally prove the optical see-through vision of the optically transparent cloak compared to direct observations without the cloak to allow the user to see through the cloak with minimal distortion.

The scientists experimentally showed the microwave cloaking performance under transverse electric (TE) and transverse magnetic (TM) polarized incidence and studied the total scattering reduction of the sample across different frequencies. The phase and amplitude of the wave reflected from the cloak was much like the wave reflected from the ground plane, causing substantial reduction of total scattering. In this way, the cloak decreased the total scattering of the object beyond the frequency range from 6 to 10 GHz. The results showed the achievement of cross-wavelength invisibility with preserved amplitude and undistorted phase at microwave frequencies, alongside omnidirectional transparency across the visible spectrum. Compared to carpet cloaks developed in the past, this work presented an experimental demonstration to achieve invisibility across cross-wavelength regions by combining multiple schemes of invisibility. The stealth technology detailed here will be more accessible with advanced nanofabrication technologies. 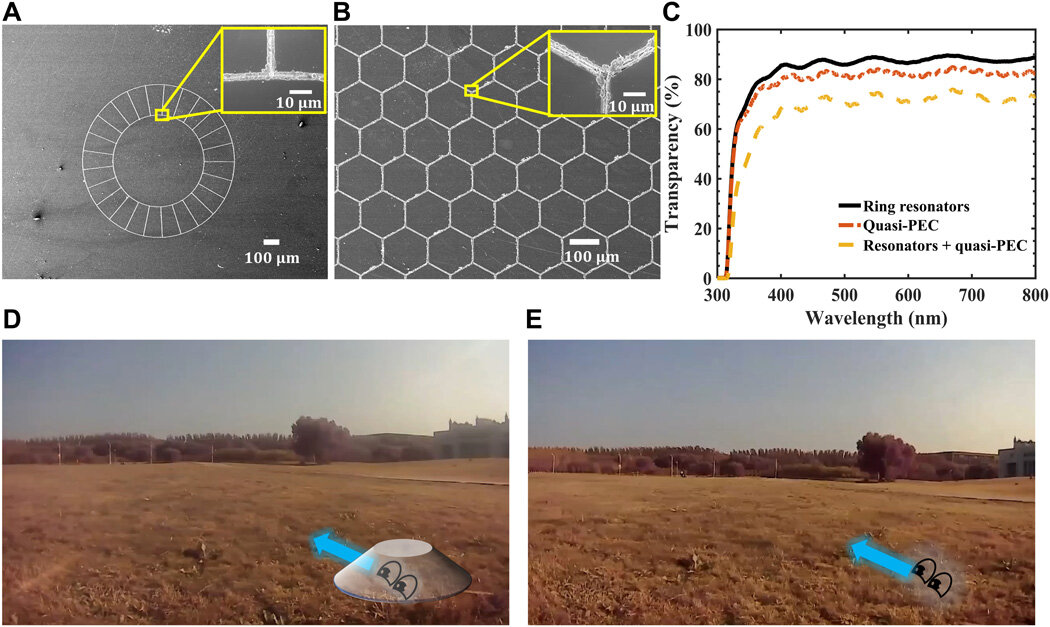 Optical characterization of the cloak. (A) SEM photo of ring 1 with the smallest radius (0.5 mm); scale bar, 100 μm. (B) SEM photo of the quasi-PEC layer; scale bar, 100 μm. The insets show a close-up view of the metal wires and their reliable electrical connections; scale bar, 10 μm. (C) Optical transparency of the outer-layer metasurface (black solid line), quasi-PEC film (orange dashed-dotted line), and bilayer structure (yellow dashed line). The bilayer transparency equals that of the ring resonators multiplied by that of the quasi-PEC film. (D) Experimental proof of how an internal observer sees through the cloak compared to (E) the case of direct observation without the cloak. Photo credit: Fu-Yan Dong and Dong-Dong Han, Jilin University.

By combining longwave cloaking and shortwave transparency in this work, Su Xu and colleagues allowed the eyes of a stealth system to clearly observe the external world, while remaining undetected. Compared to existing methods of electromagnetic wave control, the Boolean metamaterial design provided a strategy to combine various invisibility strategies for cross-wavelength invisibility integration. The work includes integrated logic circuits and paves the way to realize multifunctional or multiphysics devices within compact dimensions.

Graphene Nanoribbons Need to be Protected from Oxygen to Remain Functional