In the search for clean energy alternatives to fossil fuels, one promising solution relies on photoelectrochemical (PEC) cells – water-splitting, artificial-photosynthesis devices that turn sunlight and water into solar fuels such as hydrogen.

In just a decade, researchers in the field have achieved great progress in the development of PEC systems made of light-absorbing gold nanoparticles – tiny spheres just billionths of a meter in diameter – attached to a semiconductor film of titanium dioxide nanoparticles (TiO2 NP). But despite these advancements, researchers still struggle to make a device that can produce solar fuels on a commercial scale.

Now, a team of scientists led by the Department of Energy’s Lawrence Berkeley National Laboratory (Berkeley Lab) has gained important new insight into electrons’ role in the harvesting of light in gold/TiO2 NP PEC systems. The scientists say that their study, recently published in the Journal of Physical Chemistry Letters, can help researchers develop more efficient material combinations for the design of high-performance solar fuels devices.

“By quantifying how electrons do their work on the nanoscale and in real time, our study can help to explain why some water-splitting PEC devices did not work as well as hoped,” said senior author Oliver Gessner, a senior scientist in Berkeley Lab’s Chemical Sciences Division.

And by tracing the movement of electrons in these complex systems with chemical specificity and picosecond (trillionths of a second) time resolution, the research team members believe they have developed a new tool that can more accurately calculate the solar fuels conversion efficiency of future devices.

Electron-hole pairs: A productive pairing comes to light
Researchers studying water-splitting PEC systems have been interested in gold nanoparticles’ superior light absorption due to their “plasmonic resonance” – the ability of electrons in gold nanoparticles to move in sync with the electric field of sunlight.“The trick is to transfer electrons between two different types of materials – from the light-absorbing gold nanoparticles to the titanium-dioxide semiconductor,” Gessner explained.

When electrons are transferred from the gold nanoparticles into the titanium dioxide semiconductor, they leave behind “holes.” The combination of an electron injected into titanium dioxide and the hole the electron left behind is called an electron-hole pair. “And we know that electron-hole pairs are critical ingredients to enabling the chemical reaction for the production of solar fuels,” he added. 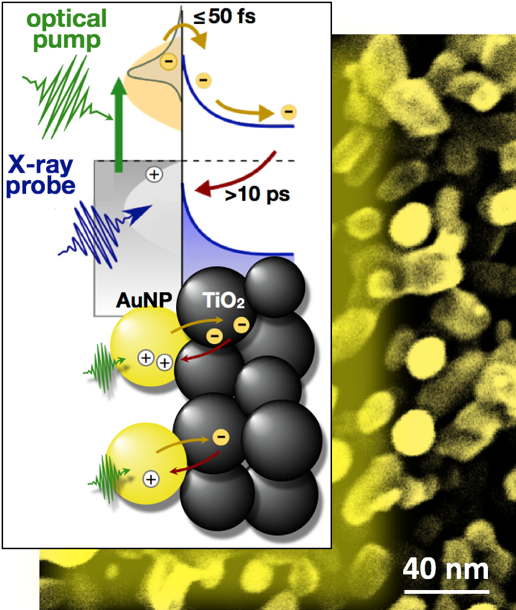 To answer these questions, Gessner and his team used a technique called “picosecond time-resolved X-ray photoelectron spectroscopy (TRXPS)” at Berkeley Lab’s Advanced Light Source (ALS) to count how many electrons transfer between the gold nanoparticles and the titanium-dioxide film, and to measure how long the electrons stay in the other material. Gessner said his team is the first to apply the X-ray technique for studying this transfer of electrons in plasmonic systems such as the nanoparticles and the film. “This information is crucial to develop more efficient material combinations.”

Using TRXPS at the ALS, the team shone pulses of laser light to excite electrons in 20-nanometer (20 billionths of a meter) gold nanoparticles (AuNP) attached to a semiconducting film made of nanoporous titanium dioxide (TiO2).

The team then used short X-ray pulses to measure how many of these electrons “traveled” from the AuNP to the TiO2 to form electron-hole pairs, and then back “home” to the holes in the AuNP.

“When you want to take a picture of someone moving very fast, you do it with a short flash of light – for our study, we used short flashes of X-ray light,” Gessner said. “And our camera is the photoelectron spectrometer that takes short ‘snapshots’ at a time resolution of 70 picoseconds.”

The TRXPS measurement revealed a few surprises: They observed two electrons transfer from gold to titanium dioxide – a far smaller number than they had expected based on previous studies. They also learned that only one in 1,000 photons (particles of light) generated an electron-hole pair, and that it takes just a billionth of a second for an electron to recombine with a hole in the gold nanoparticle.

Altogether, these findings and methods described in the current study could help researchers better estimate the optimal time needed to trigger solar fuels production at the nanoscale.

“Although X-ray photoelectron spectroscopy is a common technique used at universities and research institutions around the world, the way we expanded it for time-resolved studies and used it here is very unique and can only be done at Berkeley Lab’s Advanced Light Source,” said Monika Blum, a co-author of the study and research scientist at the ALS.

“Monika’s and Oliver’s unique use of TRXPS made it possible to identify how many electrons on gold are activated to become charge carriers – and to locate and track their movement throughout the surface region of a nanomaterial – with unprecedented chemical specificity and picosecond time resolution,” said co-author Francesca Toma, a staff scientist at the Joint Center for Artificial Photosynthesis (JCAP) in Berkeley Lab’s Chemical Sciences Division. “These findings will be key to gaining a better understanding of how plasmonic materials can advance solar fuels.”

The team next plans to push their measurements to even faster time scales with a free-electron laser, and to capture even finer nanoscale snapshots of electrons at work in a PEC device when water is added to the mix.