With a nearly $2.6 million grant from the National Institutes of Health, Michigan State University researchers are using nanoscopic particles to turn the body’s own cells into weapons that cancer won’t see coming.

“We are developing a precision, ‘Trojan Horse’ nanotherapy that treats breast cancer without the typical side effects,” said Bryan Smith, an associate professor in MSU’s Biomedical Engineering Department. Smith is also the director of the Translational NanoImmunoEngineering, or T-NIE, Lab, located at the Institute for Quantitative Health Science and Engineering.

“If we can show this is effective in animal models and bring it to humans, there is tremendous potential for cancer patients,” he said.

Led by Smith, the research team is working to overcome cancer’s devious defenses and help the body’s immune system infiltrate tumors. This approach, which Smith is also deploying to fend off plaques that clog and damage arteries, promises to minimize the collateral damage caused by related cancer therapies.

The group’s new NIH project focuses on macrophages, cells that are part of the immune system that normally ingest — and digest — pathogens and other malignant intruders. Many cancer cells, however, have developed a defense. They coat themselves with a protein known as CD47.

“They call it the ‘don’t eat me’ molecule,” Smith said, adding that CD47 is a protein that many of the body’s healthy cells use to tell macrophages to leave them be.

As breast cancer grows, the body recognizes something is wrong and sends macrophages to gobble up the perpetrators. But the cancer cells’ CD47 holds the immune cells at bay. 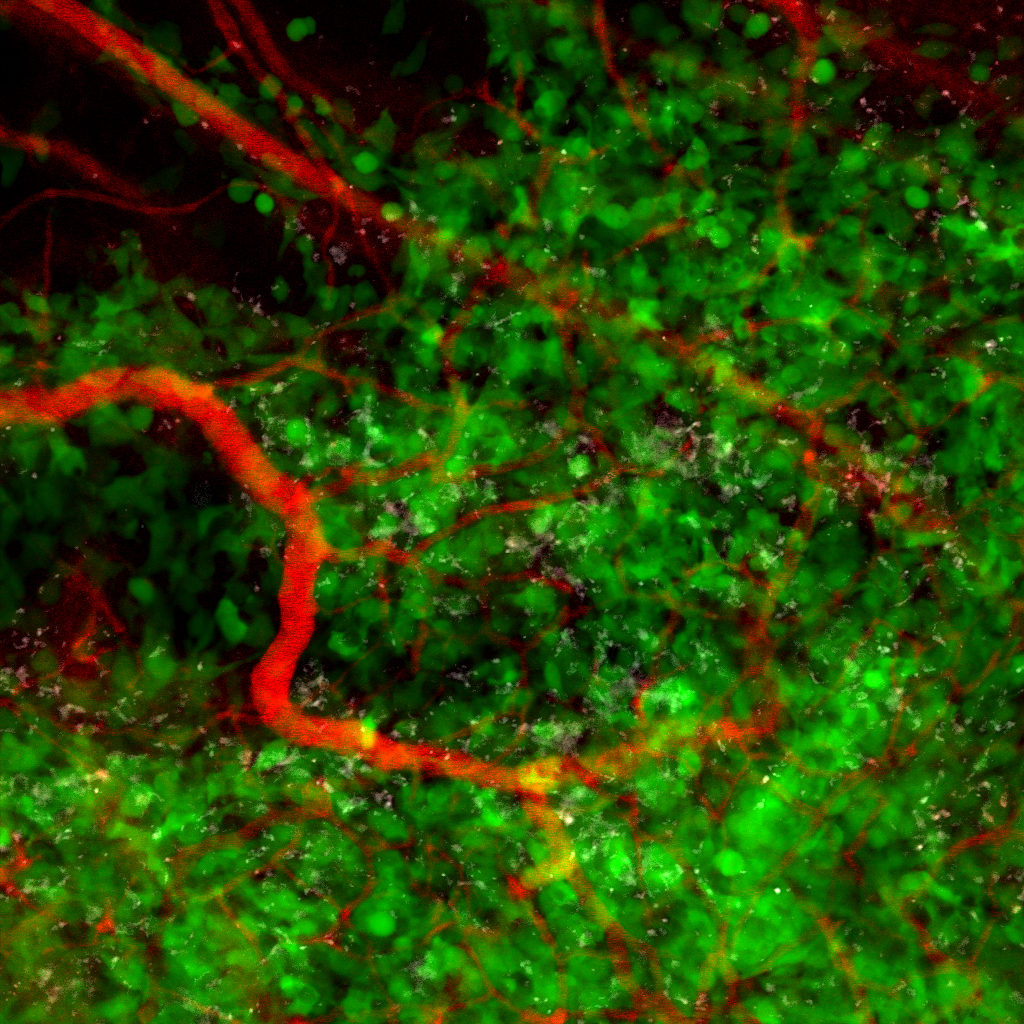 The red blood vessels and green cancer cells are easy to spot in this microscope image, taken inside a living mouse. But a closer look reveals small gray specks, which are monocytes and macrophages advancing on the tumor. Courtesy of Bryan Smith.

Researchers and clinicians are thus very interested in drugs that can neutralize CD47 or the proteins on macrophages that recognize CD47. As an example of that, Smith noted that the biotech company Gilead Sciences spent nearly $5 billion to acquire the startup company Forty Seven, which was investigating one such treatment.

Remember, though, that many healthy cells have CD47, too. That means that if these drugs are circulating in the blood stream, healthy cells can become casualties. “For example, red blood cells express high levels of CD47,” Smith said. “These drugs could lead to anemia.”

To fight the side effects, Smith and his team are developing a very small solution: ultra-thin carbon tubes that naturally seek out macrophages and their cellular predecessors, which are called monocytes. These tiny tubes carry a chemical cargo that gives immune cells the order to disregard CD47, which the tubes release only after they’ve made it inside macrophages or monocytes that are drawn to tumors. The drug-loaded tubes arm the immune cells, helping launch a covert attack targeting breast cancer cells.

Preliminary work shows that this Trojan Horse tactic reduces side effects and also, unexpectedly, proves more effective at taking down cancer cells than related treatments, Smith said. This early work was done using cells cultured in petri dishes and the team will next study its therapy in animal models thanks to the NIH grant.

“The funded work to use nanoparticles as a selective therapy has potential to revolutionize therapy,” said Eran Andrechek, associate professor in the Department of Physiology, who is a grant co-investigator. “I’m excited to be collaborating on this project and am offering our expertise in preclinical models of breast cancer.”

In addition to Andrechek, Smith’s Spartan collaborators include Professor Norbert Kaminski in the Pharmacology and Toxicology Department and research specialist Dhruv Sharma in the Center for Statistical Training and Consulting. Nick Leeper, a professor of vascular surgery and cardiovascular medicine at Stanford University, is also on the team.

“The investigative team is highly qualified for these studies that are highly interesting and will have high impact,” commented one grant reviewer.

Although this grant focuses on breast cancer, Smith said that this strategy could work equally well on the many forms of cancer that use a CD47 defense. “I think that there are many things to be excited about,” he said.