Scientists Develop a Micro-Supercapacitor Made of Graphene Ink

Researchers from the Daegu Gyeongbuk Institute of Science and Technology, South Korea, recently developed a low-cost energy storage device to power electronic devices such as wearable skin sensors. The supercapacitor can be used for remote medical monitoring and diagnosis on wearable devices such as the Fitbit, Apple Watch, and the Samsung Gear Watch.

The paper was recently published in the journal Nano Energy. The small supercapacitors, or energy storage devices, are composed of graphene ink that is sprayed into flexible substrates.

Materials scientist Sungwon Lee shared that as the demand for wearable devices and remote diagnosis has increased, scientists have focused on developing electronic skin devices. The team focused on "extremely tiny and flexible energy devices as a power source."

The authors wrote that to develop "unique technology typically on a single platform, it is very crucial to adopt highly-flexible and embeddable energy storage devices with adequate efficiencies as power sources."

The Micro-Supercapacitor
The skin can reveal a lot about the medical condition of people, such as rashes or inflammation, discoloration, and a shift in body temperature. Wearable devices are also useful in monitoring physical activity, heart rate, sleep quality, and blood pressure.

In healthcare, some patients are monitored through wearable ECG (electrocardiogram) monitors and biosensors. Biosensors can be in the form of adhesive patches which can help prevent cardiac or respiratory arrest.

Energy is stored when the micro-supercapacitors are charged and electrical charges accumulate on the electrodes. The device has a shorter charging time compared to rechargeable batteries but stores less energy. 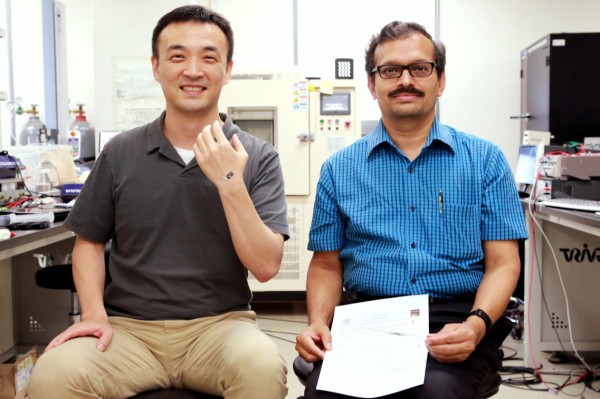 The device was developed together with Dr. Koteeswara Nandanapalli (right) and colleagues at DGIST, the Korea Institute of Geoscience and Mineral Resources, and Dongguk University in Korea.

The micro-supercapacitor also has electrodes with interlocking teeth that look like combs. However, fabricating such a device is expensive and cannot be done on flexible and temperature-sensitive substrates.

Instead, the team developed a way to spray the graphene on a flexible substrate. The interlocking electrodes on the paper-thin energy storage device had excellent performance, shared the team.

The graphene ink had to be specifically sprayed onto the flexible substrate at a 45-degree angle and at 176 degrees Fahrenheit. The micro-supercapacitor is only 23 micrometers thin and can store energy four times more than Li-ion batteries.

Developing Wearable Devices
The device can be attached to wearable devices, demonstrated the scientists. The micro-supercapacitor efficiently storing energy "shows that it's possible to reduce the thickness of micro-supercapacitors for use in flexible devices, without degrading their performance," says Lee. They are still working to improve the device's capacity to store energy so they can be used on electronic skin devices.

American researchers also recently developed a wearable monitor that can be drawn on the skin with ink made of tiny sensors and circuits. Drawn-on-skin electronics and other electronic skin devices are being developed to help medical experts diagnose and treat conditions.