Therapeutic nucleic acids—lab-created segments of DNA or RNA, designed be used to block or modify genes, control gene expression or regulate other cellular processes—are a promising but still emerging area of biomedical treatment, with several drugs already in use and many more in trials. Nucleic acid nanoparticles (NANPs) are programmable assemblies made exclusively of nucleic acids with a number of therapeutic nucleic acid sequences embedded in their structure in a specific configuration, designed for the packaging and delivery of a number of intercellular or extracellular treatments simultaneously, to cause multiple, therapeutic actions human cells.

Perhaps predictably for a new class of drugs, this promising new form of treatment has often run into difficulties in clinical testing. Recurring problems have kept many products under development from being approved for use, and have had a discouraging effect on continuing research. The foremost of these difficulties have been adverse immune reactions in response to the delivery of NANP-based formulations.

In a paper in Nature Protocols, nanotechnology researchers Marina Dobrovolskaia from the Frederick National Laboratory for Cancer Research, and Kirill Afonin from the University of North Carolina at Charlotte, describe the development of a reproduceable protocol that accurately assesses the qualitative and quantitative immune properties of different NANPs when used to deliver therapeutic nucleic acids. 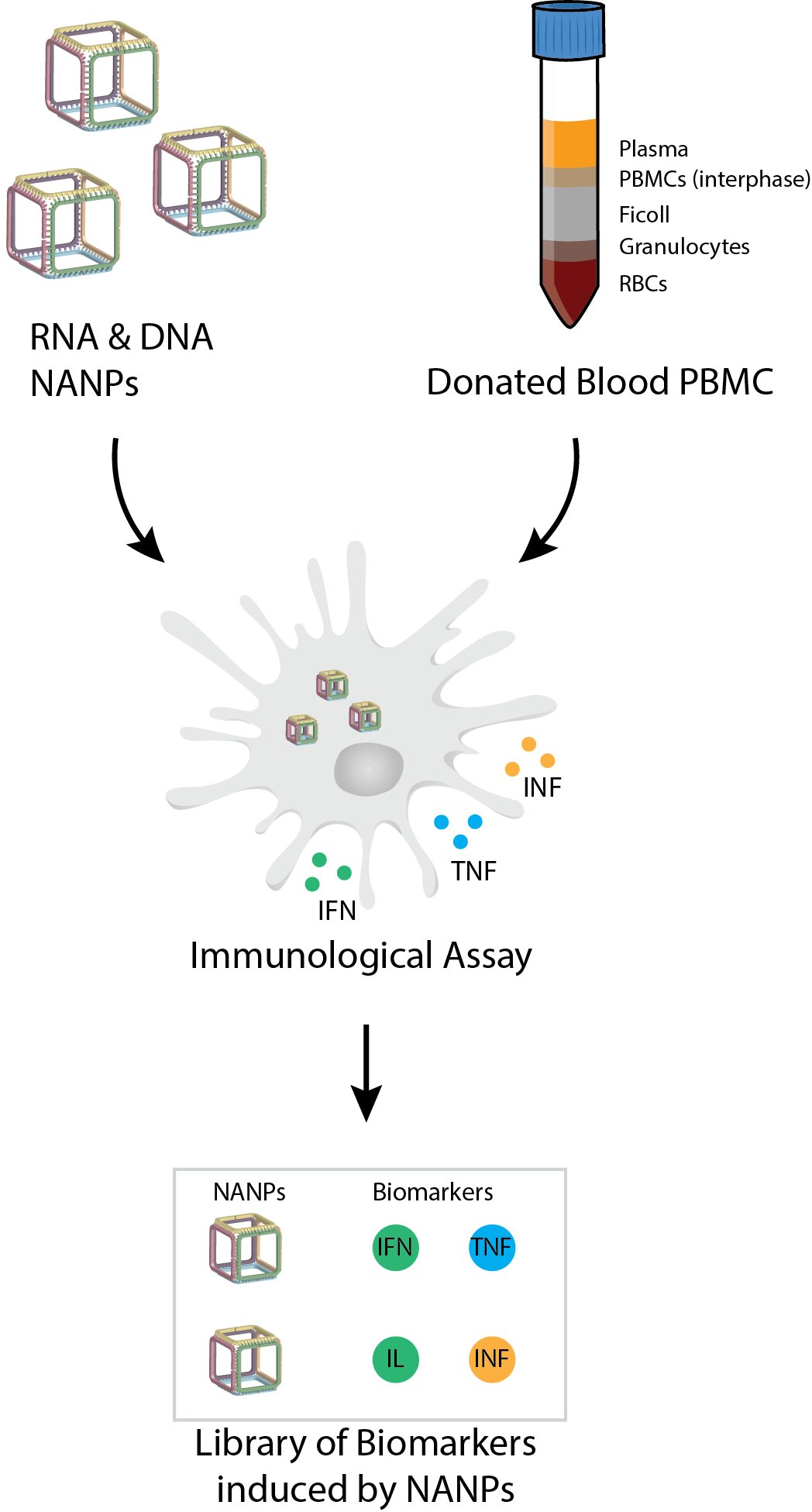 Schematic summary of the experimental flow.

"Ten to twenty percent of all drugs are withdrawn during clinical trials due to immunotoxicity—nucleic acid therapies are not an exception," said Afonin, whose research, among other things, focuses on NANP development and understanding immune responses to NANP's. "This is especially true for NANPs because therapeutic use of nucleic acids is a relatively young area."

"There are lots of unknown immune characteristics of NANP's that can preclude them from entering clinical trials. This inhibits research in the field, because researchers know that after billions of dollars in testing expense you may still have a drug fail because of an adverse immune reaction in trials," he noted. "So, this is the key: how can we predict carefully the immune stimulation of a drug before we put it in a patient?"

The protocol proposed in the paper is a detailed step-by-step process for assessing inflammatory properties of any given NANP design when administered to humans, using human peripheral blood mononuclear cells ("white blood cells") as a test model. The in vitro experiments performed in the paper used cells freshly drawn and isolated from the blood of over 100 healthy human donors, though the paper notes that as few as three donors could be adequate to account for individual genetic diversity in immune cells.

"Aiming for a broad sample in our studies, we used more than 100 donors and the blood was drawn over different periods of the year, so it was a very heterogeneous pool of blood cells," Afonin noted.

"This protocol is reproduceable and it uses the most accurate model," he said. "It's more predictive of cytokine storms than animal models, which is, frankly, amazing. This also makes it affordable for more researchers, because they don't have to work with animals."

A reliable and accurate standardized protocol for assessing human immune response to different particle designs can be of great value in supporting research in NANPs, the paper argues: "In order to further advance the translation of NANPs from bench to clinic, the field is in great need of reliable experimental protocols for the assessment of both safety and efficacy of these novel nanomaterials."

"This is important because there are hundreds of researchers working on NANPs and everyone has their own preferred formulation," Afonin said. "The problem is that they all also use different protocols. When you read their publications, it is difficult to say which formulation is better because the conditions that they have tested them under are completely different—there is no harmony."

While a toxic immunological response might preclude a specific NANP design from entering clinical trials, the paper notes that in some therapies, some of the specific immune responses caused by some NANPs may, in fact, be useful and desired.

"The 'quality' being measured here is what kind of interferons or cytokines will be produced in reaction to the specific NANP," he said. "Both quality and quantity are crucial questions. And sometimes the immune response is not bad or undesired—by using this protocol, we can assess the quality and quantity of the immune response of a specific NANP so it can be used—as a vaccine adjuvant, for example."

Afonin is confident that the protocol produces highly accurate results because of the extensive experimentation that went into its design.

"The steps of this protocol have been thought through and validated for more than 60 different NANP designs, generated both by my lab and by other people in the field—a very representative sample," Afonin emphasized. "Our goal is to harmonize testing and make something that will be a milestone for future research."

Read the original article on University of North Carolina at Charlotte.