Scientists Explain the Paradox of Quantum Forces in Nanodevices

Researchers from the Peter the Great St. Petersburg Polytechnic University (SPbPU) proposed a new approach to describe the interaction of metals with electromagnetic fluctuations (i.e., with random bursts of electric and magnetic fields). The obtained results have great potential for application in both fundamental physics and for creating nanodevices for various purposes. The article was published in the International Journal “European Physical Journal C”.

The operation of microdevices used in modern technology is influenced by the Casimir force caused by electromagnetic fluctuations. This is the force of attraction acting between two surfaces in the vacuum. Such an interaction between electrically neutral bodies located at a distance of less than one micrometer was theoretically described in the middle of the 20th century by Academician Evgeny Lifshitz. In some cases, however, Lifshitz's theory contradicted the experimental results. A mysterious paradox was discovered in the process of precise measurements of the Casimir forces in nanodevices.

“The predictions of the Lifshitz’s theory were in agreement with the measurement results only if the energy losses of conduction electrons in metals were not taken into account in calculations. These losses, however, do exist! It is common knowledge that electric current slightly heats the wire. In the literature, this situation is called the Casimir puzzle,” explains Galina Klimchitskaya, Professor of the Institute of Physics, Nanotechnology and Telecommunications, SPbPU.

The scientists of Polytechnic University were able to simultaneously take into account the energy losses of electrons in metals and to reach an agreement between the predictions of the Lifshitz theory and high-precision measurements of the Casimir force. A new approach, describing the interaction of metals with electromagnetic fluctuations, takes into account that there are two types of fluctuations: The real fluctuations (similar to the observed electromagnetic fields), and the so-called virtual fluctuations which cannot be directly observed (similar to the virtual particles that constitute the quantum vacuum). 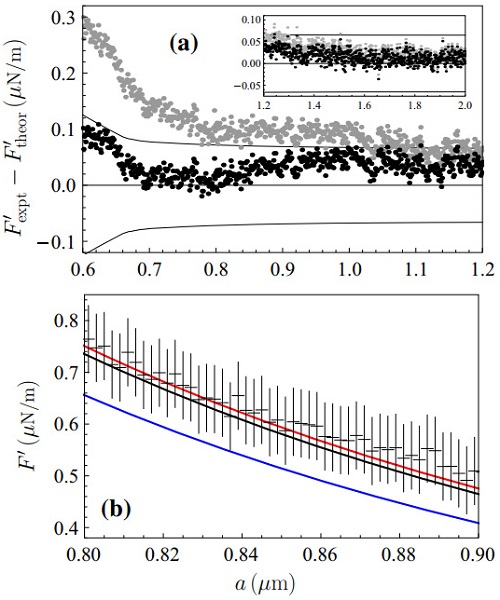 “The proposed approach leads to approximately the same contribution of real fluctuations to the Casimir force, as the commonly used one, but significantly changes the contribution of virtual fluctuations. As a result, Lifshitz's theory comes into agreement with experiment, while taking into account the energy losses of electrons in metals,” comments Vladimir Mostepanenko, Professor of the Institute of Physics, Nanotechnology and Telecommunications, SPbPU.

The published results refer to nonmagnetic metals. In the future, researchers plan to extend the results to materials with ferromagnetic properties. Thus, there will be an opportunity for reliable calculation and creation of more miniature nanodevices operated under the influence of the Casimir force.