Scientists Grow Carbon Nanotube Forest Much Longer Than any Other

Today, a multitude of industries, including optics, electronics, water purification, and drug delivery, innovate at an unprecedented scale with nanometer-wide rolls of honeycomb-shaped graphite sheets called carbon nanotubes (CNTs). Features such as light weight, convenient structure, immense mechanical strength, superior thermal and electrical conductivities, and stability put CNTs a notch above other material alternatives. However, to supply their rising industrial demand, their production must be constantly scaled up, and therein lies the main challenge to using CNTs.

While scientists have been able to grow individual CNTs approximately 50 cm in length, when they attempt arrays, or forests, they hit a ceiling at around 2 cm. This is because the catalyst, which is key to CNT growth occurring, deactivates and/or runs out before CNTs in a forest can grow any longer, driving up monetary and raw-material costs of CNT production and threatening to cap its industrial use.

Now, a ceiling-breaking strategy has been devised by a team of scientists from Japan. In their study published in Carbon, the team presents a novel approach to a conventional technique that yields CNT forests of record length: ~14 cm—7 times greater than the previous maximum. Hisashi Sugime, assistant professor at Waseda University, who led the team, explains, “In the conventional technique, the CNTs stop growing due to a gradual structural change in the catalyst, so we focused on developing a new technique that suppresses this structural change and allows the CNTs to grow for a longer period.”

The team created a catalyst based on their findings in a previous study to begin with. They added a gadolinium (Gd) layer to the conventional iron-aluminum oxide (Fe/Al2Ox) catalyst coated onto a silicon (Si) substrate. This Gd layer prevented the deterioration of the catalyst to a certain extent, allowing the forest to grow up to around 5 cm in length. 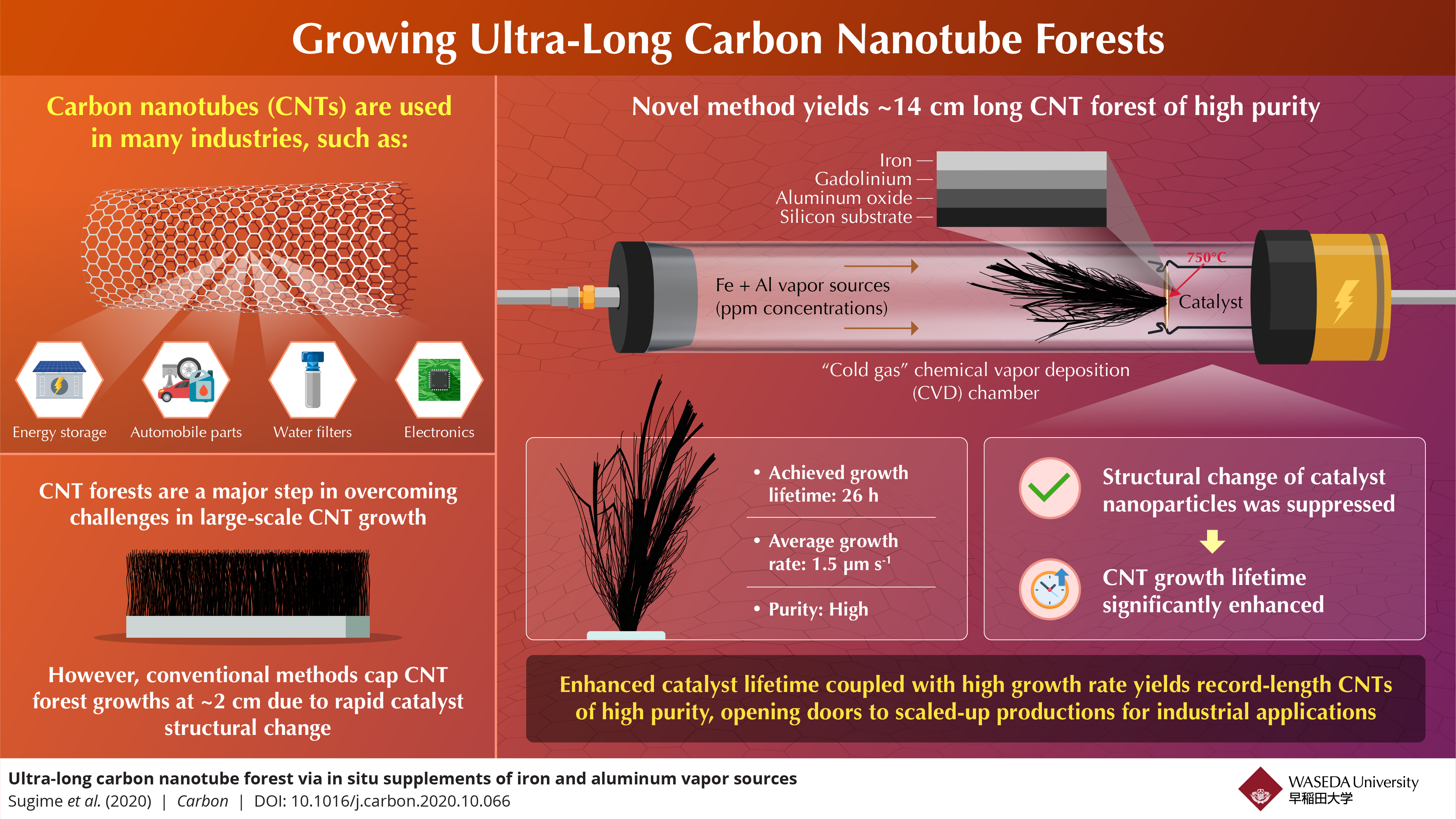 Although carbon nanotube forests are hard to grow very long via conventional methods, a little tweak in technique can change things dramatically.

To further prevent catalyst deterioration, the team placed the catalyst in their original chamber called the cold-gas chemical vapor deposition (CVD) chamber. There, they heated it to 750°C and supplied it with small concentrations (parts-per-million) of room temperature Fe and Al vapors. This kept the catalyst going strong for 26 hours, in which time a dense CNT forest could grow to 14 cm. Various analyses to characterize the grown CNTs showed that they were of high purity and competitive strength.

This achievement not only overcomes hurdles to the widespread industrial application of CNTs but it opens doors in nanoscience research. “This simple but novel method that drastically prolongs catalyst lifetime by supplying ppm-level vapor sources is insightful for catalyst engineering in other fields such as petrochemistry and nanomaterial crystal growth,” Sugime says. “The knowledge herein could be pivotal to making nanomaterials a ubiquitous reality.”