Lithium-ion batteries work by shuffling lithium ions between a positive electrode (cathode) and a negative electrode (anode) during charging and in the opposite direction during discharging. Our smartphones, laptops, and electric vehicles conventionally employ lithium-ion batteries with anodes made of graphite, a form of carbon. Lithium is inserted into graphite as you charge the battery and removed as you use the battery.

While graphite can be reversibly charged and discharged over hundreds or even thousands of cycles, the amount of lithium it can store (capacity) is not enough for energy-intensive applications. For example, electric cars can only travel so far before they need to be recharged. In addition, graphite cannot be charged or discharged at very high rates (power). Because of these limitations, scientists have been on the hunt for alternative anode materials. 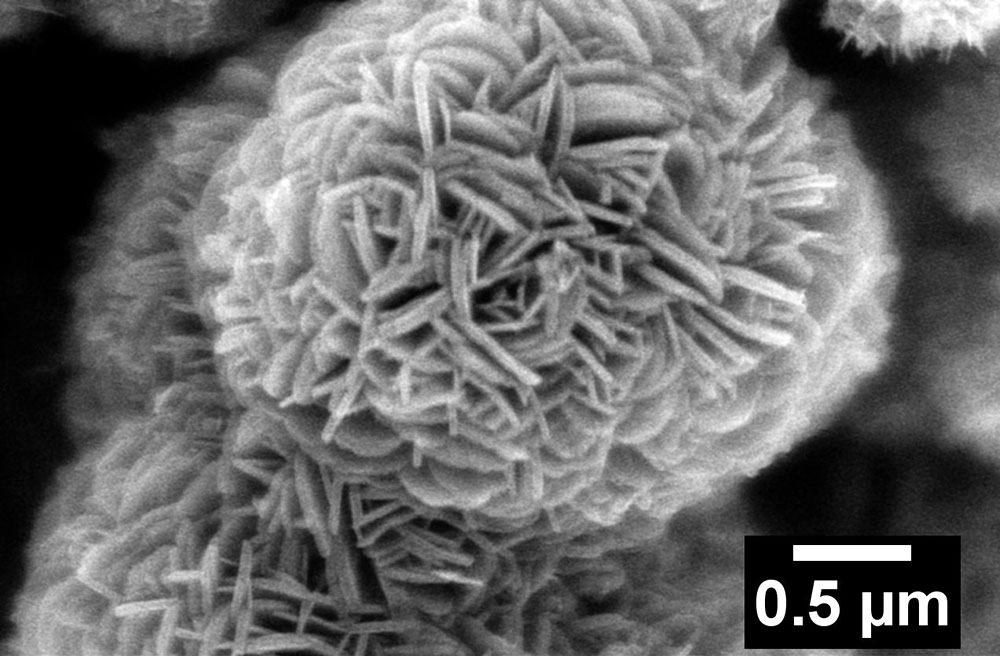 One such promising anode material is lithium titanate (LTO), which contains lithium, titanium, and oxygen. In addition to its high-rate capability, LTO has good cycling stability and maintains empty sites within its structure to accommodate lithium ions. However, LTO conducts electricity poorly, and lithium ions are slow to diffuse into the material.

“Pure LTO has moderate usable capacity but can deliver power quickly,” said Amy Marschilok, an associate professor in the Department of Chemistry and an adjunct faculty member in the Department of Materials Science and Chemical Engineering at Stony Brook University—where she also serves as deputy director of the Center for Mesoscale Transport Properties (m2M)—and Energy Storage Division manager and scientist in the Interdisciplinary Science Department at the U.S. Department of Energy’s (DOE) Brookhaven National Laboratory. “High-rate battery materials are appealing for applications where you want to use stored energy quickly, over minutes—such as electric vehicles, portable power tools, and emergency power supply systems.”

Marschilok is part of an interdisciplinary Brookhaven Lab–Stony Brook team that began collaborating on LTO research in 2014. In their latest effort, they increased the capacity of LTO by 12 percent by adding chlorine through a process known as doping.

“Controlled doping can change the electronic and structural properties of a material,” explained Stanislaus Wong, distinguished professor in the Department of Chemistry at Stony Brook University, where he is also the principal investigator in charge of the student-based team comprising the Wong Group. “In my group, we are interested in developing and using chemistry to direct favorable structure-property correlations. For LTO, the incorporation of dopant atoms can increase electrical conductivity and expand the crystal lattice, such that the channel for lithium ions to migrate becomes wider. Scientists have been testing out many different types of dopants, but chlorine has not been explored as much.”

To make “chlorine-doped” LTO, the team used a solution-based method called hydrothermal synthesis. In hydrothermal synthesis, scientists add a solution containing relevant precursors (materials that react to form the desired product) in water, place the mixture in a sealed vessel, and expose it to relatively modest temperatures and pressures for a certain duration. In this case, to enable a scaling up of their procedure, the scientists selected a liquid-based titanium precursor instead of the solid titanium foil that had been previously used in these types of reactions. Following the hydrothermal synthesis of both pure LTO and chlorine-doped LTO for 36 hours, they performed additional chemical processing steps to isolate the desired materials. The team’s imaging studies using scanning electron microscopy (SEM) at the Electron Microscopy Facility of Brookhaven’s Center for Functional Nanomaterials (CFN) revealed that both sample types were characterized by “flower-shaped” nanostructures. This result suggested that the chemical treatment did not destroy the original structure.

“Our novel synthesis approach facilitates a more rapid, uniform, and efficient reaction for the large-scale production of these 3-D nanoflowers,” said Wong. “This relatively unique kind of architecture has a high surface area, with flower-like “petals” radially disseminating from a central core. This structure provides multiple pathways for lithium ions to access the material.

By varying the concentration of chlorine, lithium, and precursor; the purity of the precursor; and the reaction time, the scientists found the optimal conditions for making highly crystalline nanoflowers.

At the CFN, the team performed several characterization experiments based on how the samples interact with x-rays and electrons: x-ray diffraction to obtain crystallinity information and chemical composition, SEM to visualize morphology (shape), energy-dispersive x-ray spectroscopy to map the distribution of elements, and x-ray photoelectron spectroscopy (XPS) to confirm chemical composition and derive chemical oxidation states.

“The XPS data are key in this study because they prove that titanium—which ordinarily exists in LTO as 4+, meaning four electrons have been removed—is reduced to 3+,” said Xiao Tong, a staff scientist in the CFN Interface Science and Catalysis Group. “This change in chemical state is significant because the material transforms from an insulator to a semiconductor, increasing electrical conductivity and lithium-ion mobility.”

With the optimized samples, the scientists performed several electrochemical tests. They found that chlorine-doped LTO has more usable capacity under a high-rate condition in which the battery discharges in 30 minutes. This improvement was maintained over more than 100 charge/discharge cycles.

“Chlorine-doped LTO is not only better initially but also remains stable over time,” said Marschilok.

To understand why this improvement occurred, the team turned to computational theory, modeling the structural and electronic changes that arise from chlorine doping.

“When we do basic science experiments, we need to understand what we observe to see how the material is functioning and gain insights on how to improve the material’s performance,” explained Ping Liu, a chemist in Brookhaven’s Chemistry Division who was led the theoretical studies. “Theory is a very effective way to achieve such mechanistic understanding, especially for complex materials like LTO.”

In calculating the most energetically stable geometry of LTO with chlorine doping, the team found that chlorine prefers to substitute sites where oxygen sits in the LTO structure.

“This substitution throws one electron to the system, causing electronic redistribution,” said Liu. “It causes titanium, which interacts directly with chlorine, to be reduced from 4+ to 3+, consistent with the experimental XPS results. We also did calculations that showed once chlorine is substituted for oxygen, more lithium can be inserted into LTO during discharge. Chlorine is bigger than oxygen, so it provides an enlarged tunnel for lithium transport.”

Next, the team is studying how the microscopic structure of the 3-D nanoflowers affects transport. They also are exploring other atomic-level substitutions in both anode and cathode materials that may lead to improved transport.

“Improving both the electronic and ionic conductivity through one process is often challenging,” said Marschilok. “But beyond improving the performance of any one material, at m2M, we’re always thinking about designing model studies that can show the scientific community ways to develop new battery materials in a comprehensive way. The combination of material synthesis, advanced material characterization, and computational theory, as well as the collaboration between Stony Brook and Brookhaven, are strengths of m2M’s work.”

This research—published in a special issue on “Low Temperature Solution Route Approaches to Oxide Functional Nanoscale Materials” in Chemistry–A European Journal—was funded as part of m2M, an Energy Frontier Research Center supported by the DOE Office of Science, Basic Energy Sciences. The scientists performed the theoretical calculations using computational resources at the CFN and the Scientific Data and Computing Center, part of Brookhaven’s Computational Science Initiative. The CFN is a DOE Office of Science User Facility. Some co-authors were also supported by the National Science Foundation Graduate Research Fellowship and the William and Jane Knapp Chair for Energy and the Environment at Stony Brook University.