Germanium Telluride is an interesting candidate material for spintronic devices. In a comprehensive study at BESSY II, a Helmholtz-RSF Joint Research Group has now revealed how the spin texture switches by ferroelectric polarization within individual nanodomains.

Germanium telluride (GeTe) is known as a ferrolectric Rashba semiconductor with a number of interesting properties. The crystals consist of nanodomains, whose ferrolectric polarization can be switched by external electric fields. Because of the so-called Rashba effect, this ferroelectricity can also be used to switch electron spins within each domain. Germanium telluride is therefore an interesting material for spintronic devices, which allow data processing with significantly less energy input. 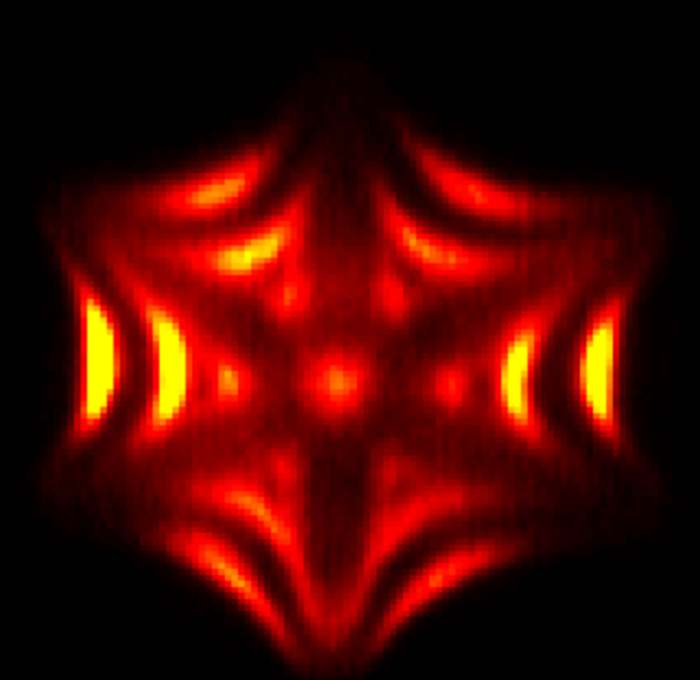 Now a team from HZB and the Lomonosov Moscow State University, which has established a Helmholtz-RSF Joint Research Group, has provided comprehensive insights into this material at the nanoscale. The group is headed by physical chemist Dr. Lada Yashina (Lomonosov State University) and HZB physicist Dr. Jaime Sánchez-Barriga. "We have examined the material using a variety of state-of-the-art methods to not only determine its atomic structure, but also the internal correlation between its atomic and electronic structure at the nanoscale," says Lada Yashina, who produced the high-quality crystalline samples in her laboratory.

Their microscopy investigations showed that the crystals possess two distinct types of boundaries surrounding ferroelectric nanodomains with sizes between 10 to 100 nanometres. At BESSY II, the team was able to observe two surface terminations with opposite ferroelectric polarization, and to analyse how these terminations correspond to nanodomains with either Ge or Te atoms at the topmost surface layer.

"At BESSY II, we were able to precisely analyze the intrincate relationship between the spin polarization in the bulk or at the surface and the opposite configurations of the ferroelectric polarization”, explains Jaime Sánchez-Barriga. The scientists also determined how the spin texture switches by ferroelectric polarization within individual nanodomains. "Our results are important for potential applications of ferroelectric Rashba semiconductors in non-volatile spintronic devices with extended memory and computing capabilities at the nanoscale," emphasizes Sánchez-Barriga.