Vinca alkaloids, represented by vinblastine, are long-known anticancer agents that strongly inhibit mitosis of cells, but they are highly toxic to normal cells and poorly tolerated for treatment. This major issue was greatly improved by our nano-DDS technology. In the experiment using mice with GBM transplanted intracranial, the DAVBNH loaded nanomicelle treated group containing improved 100% survival rate by 2 times and 50% survival rate by 2.6 times in comparison with the free DAVBNH treated group.

This result, published in "Biomaterials" (IF = 10.317, 2019) on October 23, suggests that it may be clinically applicable to cancers with rapid disease progression other than glioblastoma. 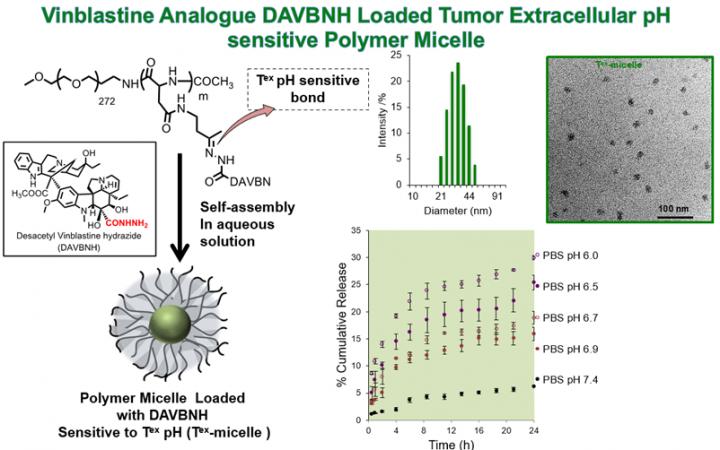 We conjugated DAVBNH to an aliphatic ketone-functionalized PEG-PAA block copolymer that spontaneously self assembles in water to form a micelle.

Kawasaki in Japan: The Innovation Center of NanoMedicine (Director General: Prof. Kazunori Kataoka, Location: Kawasaki-City in Japan, Abbreviation: iCONM) announced in "Biomaterials" that polymeric nanomicelles that selectively releases anti-cancer drugs by utilizing the acidity in the cells of glioblastoma (GBM) has been developed focusing on the fact that the hydrogen ion concentration (pH) of GBM cells is lower than healthy tissues.

GBM is a brain tumor with extremely fast disease progression and poor prognosis (5-year survival rate: 10.1%). Although some drug candidates are under clinical trials, there are currently no drug therapies that can significantly improve the overall survival. Besides, it is difficult to completely remove it by surgery keeping the brain function as much as possible while the boundary with normal tissues is unclear.

Recently, it has been noted that as a treatment method for GBM, a method using an electromagnetic pulse called Tumor Treatment Fields (TTF) improved the overall survival (10-14 months to 16-24 months). The mechanism is known to be mitotic inhibition based on the destruction of the mitotic spindle that occurs during cell division. Therefore, we focused on the vinca alkaloids represented by vinblastine, an anticancer drug, which has been used as a mitosis inhibitor for decades.

This type of drug suppresses mitosis by inhibiting the polymerization of intracellular microtubules and shows strong cytotoxicity, but it also affects not only cancer cells but also normal cells, and results in various types of serious adverse events including myelosuppression. Therefore, we considered the selective delivery of vinblastine to tumor tissue using nano-DDS (drug delivery system) with polymeric micelles.

In this system, the drug must be released after reaching the tumor tissue. Cancer cells are usually placed in an anaerobic environment, unable to successfully run the TCA cycle to sustain their lives, and obtain the life energy exclusively from glycolysis. This nature makes cancer tissues accumulate acidic molecules and result in acidosis. This is more pronounced in faster-growing cells and is more acidic in rapidly developing cancers such as GBM. We wanted to take advantage of this property for drug release from micelles.

Hydrazone bonding was chosen as a linker that causes acidic cleavage and prepared by selecting a block polymer with carbonyl group such as ketones or aldehydes and using desacetyl vinblastine hydrazide (DAVBNH) as a vinca alkaloid. It is known that DAVBNH is 6 times more potent than vinblastine in suppressing the growth of glioblastoma. Self-association of a PEG-PAA block copolymer with DAVBNH attached to an aliphatic ketone residue in water was able to produce nanomicelles with an average diameter of 31 nm, containing DAVBNH in its inner core.

Examining the stability of these micelles in solutions at various acidities from pH 6.0 to pH 7.4, the amount of free DAVBNH was significantly different between pH 6.9 and pH 7.4. In other words, it was found that the drug can be released on the slightly acidic side by accurately capturing the subtle difference in pH. It was also found that when the ketone residue is changed to an aldehyde residue, the drug is not released until the pH drops below 5.0.