An Ionic Forcefield for Nanoparticles

Researchers have reported that a tunable coating allows hitch-hiking nanoparticles to slip past the immune system to their target.

Nanoparticles are promising drug delivery tools, offering the ability to administer drugs directly to a specific part of the body and avoid the awful side effects so often seen with chemotherapeutics.

But there’s a problem. Nanoparticles struggle to get past the immune system’s first line of defense: proteins in the blood serum that tag potential invaders. Because of this, only about 1 percent of nanoparticles reach their intended target.

“No one escapes the wrath of the serum proteins,” said Eden Tanner, a former postdoctoral fellow in bioengineering at the Harvard John A. Paulson School of Engineering and Applied Sciences (SEAS). 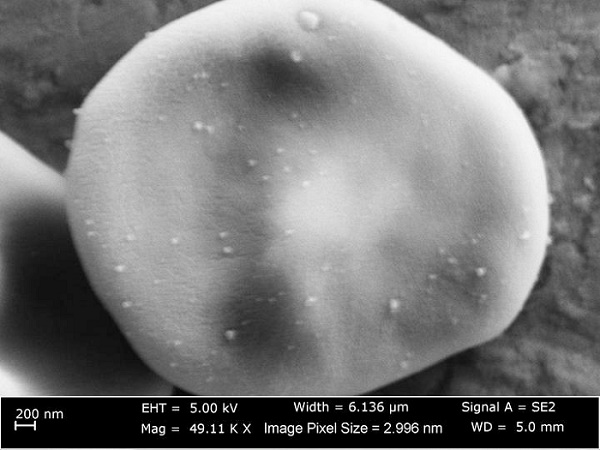 An SEM image of the nanoparticles on the red blood cell.

Now, Tanner and a team of researchers led by Samir Mitragotri, the Hiller Professor of Bioengineering and Hansjorg Wyss Professor of Biologically Inspired Engineering at SEAS, have developed an ionic forcefield that prevents proteins from binding to and tagging nanoparticles. In mouse experiments, nanoparticles coated with the ionic liquid survived significantly longer in the body than uncoated particles and, surprisingly, 50 percent of the nanoparticles made it to the lungs. It’s the first time that ionic liquids have been used to protect nanoparticles in the blood stream.

“The fact that this coating allows the nanoparticles to slip past serum proteins and hitch a ride on red blood cells is really quite amazing because once you are able to fight the immune system effectively, lots of opportunities open up,” said Mitragotri, who is also a Core Faculty Member of Harvard’s Wyss Institute for Biologically Inspired Engineering.

The research is published in Science Advances.

Ionic liquids, essentially liquid salts, are highly tunable materials that can hold a charge. “We knew that serum proteins clear out nanoparticles in the bloodstream by attaching to the surface of the particle and we knew that certain ionic liquids can either stabilize or destabilize proteins,” said Tanner, who is now an Assistant Professor of Chemistry & Biochemistry at the University of Mississippi. “The question was, could we leverage the properties of ionic liquids to allow nanoparticles to slip past proteins unseen.”

“The great thing about ionic liquids is that every small change you make to their chemistry results in a big change in their properties,” said Christine Hamadani, a former graduate student at SEAS and first author of the paper. “By changing one carbon bond, you can change whether or not it attracts or repels proteins.” 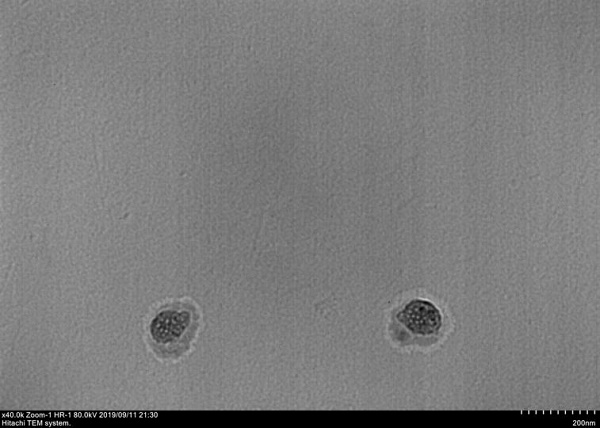 SEM image of the ionic liquid coating the nanoparticle.

The researchers coated their nanoparticles with the ionic liquid choline hexenoate, which has an aversion to serum proteins. Once in the body, these ionic-liquid coated nanoparticles appeared to spontaneously attach to the surface of red-blood cells and circulate until they reached the dense capillary system of the lungs, where the particles sheared off into the lung tissue.

“This hitchhiking phenomenon was a really unexpected discovery,” said Mitragotri. “Previous methods of hitchhiking required special treatment for the nanoparticles to attach to red blood cells and even then, they only stayed at a target location for about six hours. Here, we showed 50 percent of the injected dose still in the lungs after 24 hours.”

The research team still needs to understand the exact mechanism that explains why these particles travel so well to lung tissue, but the research demonstrates just how precise the system can be.

“This is such a modular technology,” said Tanner, who plans to continue the research in her lab at University of Mississippi. “Any nanoparticle with a surface change can be coated with ionic liquids and there are millions of ionic liquids that can be tuned to have different properties. You could tune the nanoparticle and the liquid to target specific locations in the body.”

“We as a field need as many tools as we can to fight the immune system and get drugs where they need to go,” said Mitragotri. “Ionic liquids are the latest tool on that front.”