A Rochester-based firm aims to print perovskite and other PV layers on a flexible glass substrate using a roll-to-roll machine Kodak has used to produce photographic film.

The plan is backed by two partnerships—one with the Eastman Kodak Company for roll-to-roll printing and another with glass and ceramics business Corning, for flexible glass. EMC’s funding includes a $4 million research grant from the Solar Energy Technologies Office of the U.S. Department of Energy. 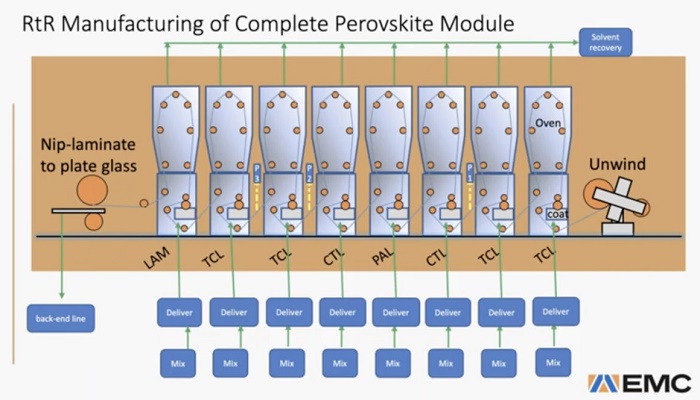 If the technology works, an eight-station roll-to-roll machine could produce 4 GW of perovskite PV material per year, according to Energy Materials CEO Stephan DeLuca, who was speaking in a webinar hosted by the U.S. Manufacturing of Advanced Perovskites (U.S. MAP) consortium. The capital cost of the EMC project would be around $100 million – $25 million per gigawatt of output capacity – based on perovskite with 20% conversion efficiency, said DeLuca—far lower than the projected cost of $400 million per gigawatt for silicon PV capacity suggested by the chief executive.

DeLuca shared the process diagram at the top of this story, showing flexible glass moving from right to left with eight stations printing transparent conductive layers (TCL), charge transport layers (CTL), a perovskite absorption layer (PAL), and laminating glue (LAM). Ink tanks are shown in blue at the bottom. On the left, the flexible perovskite-coated glass is laminated to plate glass. Ten separate lines would then make PV modules from the laminated plate glass.

“At Kodak, we manufactured film products up to 1.5m wide and as fast as 1,000 feet per minute,” states EMC chief technology officer Tom Tombs on the start-up’s website. While some Kodak film products had 15 layers, according to former Kodak program director Tombs, perovskite PV printing would require only six to eight layers, with the line operating at a much slower 100 feet per minute.

Energy Materials says hurdles have included identifying the right perovskite inks to use, the correct inks to use for other layers, and avoiding the need for a long residence time for annealing in an oven (labeled on the top right of the process diagram above), as the latter would slow line speed.

The Kodak printing line to be used by Energy Materials Corporation for roll-to-roll printing of perovskites on flexible glass.

“Our scale-up experience on Kodak’s pilot line,” said Tombs, “has proven that roll-to-roll solar module production is well within the knowledge base of EMC and our partners.”