Using modern nanotechnology, it is possible nowadays to produce structures which have a feature sizes of just a few nanometres. This world of the most minute particles – also known as quantum systems – makes possible a wide range of technological applications, in fields which include magnetic field sensing, information processing, secure communication or ultra-precise time keeping.

The production of these microscopically small structures has progressed so far that they reach dimensions below the wavelength of light. In this way, it is possible to break down hitherto existent boundaries in optics and utilize the quantum properties of light. In other words, nanophotonics represent a novel approach to quantum technologies.

As individual photons move in the quantum regime, scientists describe the relevant light sources as quantum emitters that can be embedded in nanodiamonds, among others. These special diamonds are characterized by their very small particle size, which can range from just a few to several hundred nanometres. 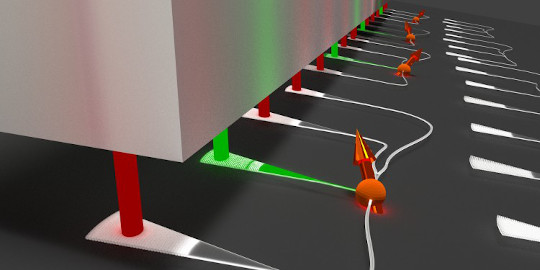 Researchers at the University of Münster have now succeeded for the first time in fully integrating nanodiamonds into nanophotonic circuits and at the same time addressing several of these nanodiamonds optically. In the process, green laser light is directed onto colour centres in the nanodiamonds, and the individual red photons generated there are emitted into a network of nano-scale optical components. As a result, the researchers can now control these quantum systems in a fully integrated state. The results have been published in the journal “Nano Letters”.

Previously, it was necessary to set up bulky microscopes in order to control such quantum systems. With fabrication technologies similar to those for producing chips for computer processors, light can be directed in a comparable way using waveguides (nanofibres) on a silicon chip. These optical waveguides, measuring less than a micrometre, were produced with the electron-beam lithography and reactive ion etching equipment at the Münster Nanofabrication Facility (MNF). “Here, the size of a typical experimental set-up was shrunk to a few hundred square micrometres,” explains Assistant Professor Carsten Schuck from the Institute of Physics at the University of Münster, who led the study in collaboration with Assistant Professor Doris Reiter from the Institute of Solid State Theory.

“This downsizing not only means that we can save space with a view to future applications involving quantum systems in large numbers,” he adds, “but it also enables us, for the first time, to control several such quantum systems simultaneously.” In preliminary work prior to the current study, the Münster scientists developed suitable interfaces between the nanodiamonds and nanophotonic circuits.

These interfaces were used in the new experiments, implementing the coupling of quantum emitters with waveguides in an especially effective way. In their experiments, the physicists utilized the so-called Purcell effect, which causes the nanodiamond to emit the individual photons with a higher probability into the waveguide, instead of in some random direction.

The researchers also succeeded in running two magnetic field sensors, based on the integrated nanodiamonds, in parallel on one chip. Previously, this had only been possible individually or successively. To make this possible, the researchers exposed the integrated nanodiamonds to microwaves, thus inducing changes of the quantum (spin) state of the colour centres. The orientation of the spin influences the brightness of the nanodiamonds, which was subsequently read out using the on-chip optical access.

The frequency of the microwave field and therewith the observable brightness variations depend on the magnetic field at the location of the nanodiamond. “The high sensitivity to a local magnetic field makes it possible to construct sensors with which individual bacteria and even individual atoms can be detected,” explains Philip Schrinner, lead author of the study.

First of all, the researchers calculated the nanophotonic interface designs using elaborate 3D simulations, thus determining optimal geometries. They then assembled and fabricated these components into a nanophotonic circuit. After the nanodiamonds were integrated and characterized using adapted technology, the team of physicists carried out the quantum mechanical measurements by means of a set-up customized for the purpose.

“Working with diamond-based quantum systems in nanophotonic circuits allows a new kind of accessibility, as we are no longer restricted by microscope set-ups,” says Doris Reiter. “Using the method we have presented, it will be possible in the future to simultaneously monitor and read out a large number of these quantum systems on one chip,” she adds.

The next steps will include implementing quantum sensors in the field of magnetometry, as used for example in materials analysis for semi-conductor components or brain scans. "To this end", say Carsten Schuck, "we want to integrate a large number of sensors on one chip which can then all be read out simultaneously, and thus not only register the magnetic field at one place, but also visualize magnetic field gradients in space.”

Read the original article on University of Münster.