A Step Forward in the Practical Industrial Applications of Carbon Nanocomposites

A research team from the Skoltech Center for Design, Manufacturing and Materials have recently published a study focusing on multifunctional materials created through the addition of carbon nanoparticles to polymer matrices, designed to allow self-diagnostic monitoring through an inexpensive technique.

The study, authored by Skoltech PhD student Hassaan Ahmad Butt from the research group of Professor Sergey Abaimov, has recently been published in Composite Structures and is part of a multiphase project designed to create self-sensing materials which can be incorporated and produced using existing industrial manufacturing routes.

With property demands from polymer composites increasing year by year worldwide, carbon nanoparticles have received a large amount of attention when it comes to their addition to such material systems. Studies have shown that they can increase required mechanical properties with relatively small addition amounts, all the while allowing the final material to be electrically conductive and piezoresistive in nature. However, carbon nanoparticle incorporation into large scale production is problematic, requiring intensive facility upgrades.

“This is why we decided to use masterbatches and industrially available, inexpensive manufacturing techniques. Masterbatches can be stored, transported and incorporated into large scale production routes without the necessity of expensive overhauls. Almost every facility dealing with thermoset polymers has a simple mixer.”, said Hassaan. 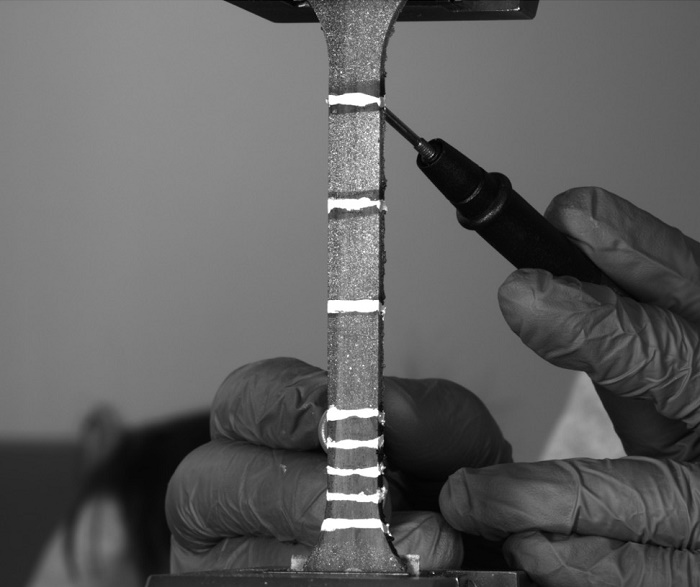 CNT-nanocomposites being tested for piezoresistive response in an Intron 5969 Universal Testing Systems under tensile load. The values of resistance change as increasing tensile load is applied which allow the material to send a self-report as to its condition. The silver lines are conductive contacts and the white speckles are used by the LIMESS digital image correlation (DIC) system to calculate strain values.

The study examines how the addition of carbon nanoparticles can change the electric conductivity of polymer matrices and how this itself can change during mechanical loading, be monitored and thus related to the deformation the material is experiencing. In turn, this cuts out the need for complex monitoring techniques, with a simple multimeter being able to determine the answer.

Essentially, the use of such materials has the potential to replace sensors in weight critical systems such as aircraft structures, with the material itself being able to provide measurements. The same materials and production route can be used to manufacture electrically conductive materials for applications such as electric circuit printing, electromagnetic shielding and specialized temperature and humidity sensors. The material concept is not limited to this specific manufacturing route, with possible applicability lying with pultrusion and vacuum infusion as well.

“The current materials have applications ranging from the aerospace sphere to specialized sensors. The materials are unique in the fact that they can be scaled up into structures or scaled down to attach as separate miniature sensors” said Hassaan.