NUS scientists have developed an approach to improve the generation and luminescent harvesting of molecular triplets by coupling them with lanthanide-doped nanoparticles. This innovation provides new insights on lanthanide nanocrystal-molecule interaction in the optoelectronic field.

The generation, control and transfer of triplet excitons (bound electron-hole pairs) in molecular and hybrid systems is a topic of great interest across various disciplines, from physics and chemistry to materials science and biology. This interest is driven by a range of potential applications, such as light emission from molecules, photon frequency conversion, photocatalysis, sensing, and photodynamic therapy. However, molecular triplets are poor light emitters so special techniques are used to circumvent this limitation.

The techniques include heavy metal-based spin-orbit coupling and tuning of the singlet-triplet energy splitting. However, both these approaches are not suitable as they focus mainly on the harvesting of the light emissions from the triplets and this places strict constraints on the molecular design.

A research team led by Prof Xiaogang LIU from the Department of Chemistry, NUS has developed a new approach to control the light emission properties of these molecular triplets by coupling organic molecules to lanthanide-doped nanoparticles (see Figure). 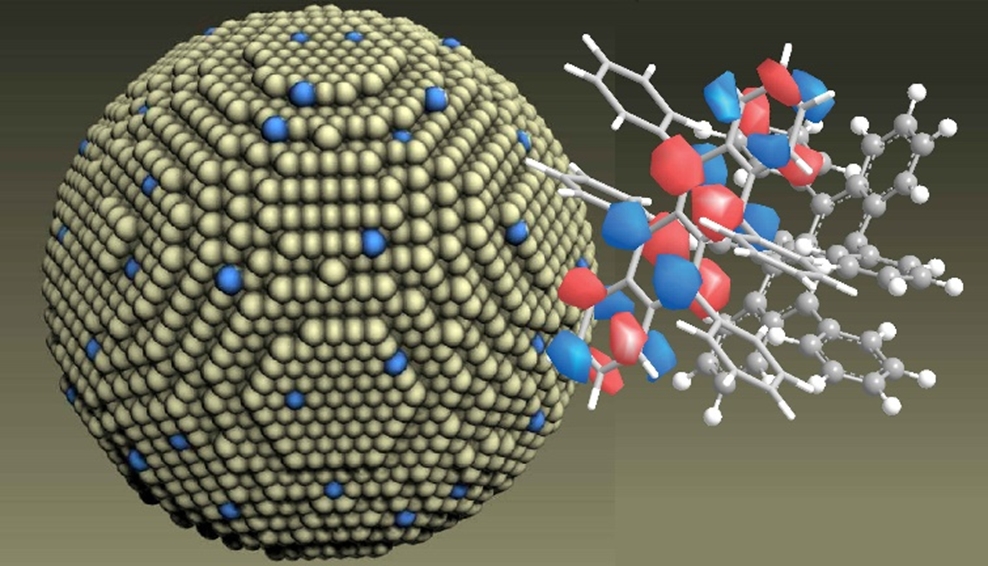 Figure shows a schematic illustration of a lanthanide-doped nanoparticle couped with an organic semiconductor. The research findings by the team provide a new way to control triplet excitons, which is important for optoelectronic research.

This research is in collaboration with Prof Renren DENG from Zhejiang University, China and Prof Akshay RAO from Cambridge University, United Kingdom. Using their method, molecular triplets can be directly generated on the organic molecules by photon absorption. This means that the molecules can gain energy and transit directly from the ground-state singlet to become excited-state triplets. This direct optical transition was not possible previously.

Prof Liu said, “We have addressed a long-standing experimental challenge faced by scientists working in the optoelectronic field, and it has been shown to be an effective strategy for luminescent harvesting of molecular triplets.

These results also establish a new method to manipulate molecular triplet excitons and are expected to open up new avenues for a broad range of disciplines, including triplet sensitisation, photocatalysis, optoelectronics, biomedicine therapeutics, sensing, and photon frequency conversion.”