Using barcodes to label and identify everyday items is as familiar as a trip to the supermarket. Imagine shrinking those barcodes a million times, from millimetre to nanometre scale, so that they could be used inside living cells to label, identify and track the building blocks of life or, blended into inks to prevent counterfeiting. This is the frontier of nanoengineering, requiring fabrication and controlled manipulation of nanostructures at atomic level - new, fundamental research, published in Nature Communications, shows the possibilities and opportunities ahead.

The researchers anticipate that such barcode structures will attract broad interests in a range of applications as information nanocarriers for bio-nanotechnology, life sciences, data storage, once they are incorporated into a variety of matrixes. 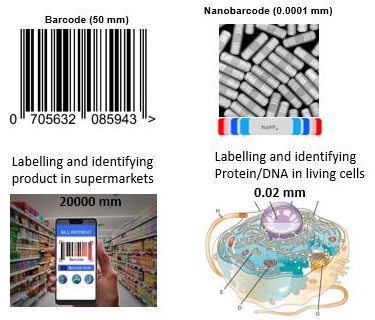 Imagine shrinking those barcodes a million times, from millimetre to nanometre scale, so that they could be used inside living cells to label, identify and track the building blocks of life or, blended into inks to prevent counterfeiting.

Lead author Dr Shihui Wen said the research provides a benchmark that will open up the potential for engineering smaller nanophotonics devices.

"The inorganic nanobarcode structures are rigid, and it is easy to control the composite, thickness and distance accuracy between different functional segments for geometrical barcoding beyond the optical diffraction limit . Because they are chemically and optically stable, the nanoscopic barcodes can be used as carriers for drug delivery and tracking into the cell, once the surface of the barcode structures is further modified and functionalized with probe molecules and cargos," Dr Wen, from the UTS Institute of Biomedical Materials and Devices (IBMD), said.

The team also had an additional breakthrough with the development of a novel, tandem decoding system, using super-resolution nanoscopy to characterize different optical barcodes within the diffraction limit.

"We had to build the instrumentation to diagnose the sophisticated functions that can be intentionally built into the tiny nanorod. These together allow us to unlock the further potential for placing atomic molecules where we want them so we can continue to miniaturise devices. This was the first time we were able to use super resolution system to probe, activate and readout the specific functional segment within the nanorod.

"Imagine a tiny device, smaller than one thousandth the width of a human hair, and we can selectively activate a particular region of that device, see the optical properties, quantify them. This is the science now showing many new possibilities," he said. Professor Jin is also the co-director of UTS-SUStech Joint Research Centre.

"These devices are also readily applicable for high-security-level anticounterfeiting when different batches of them are blended with inks and can be readily printed on high-value products for authentication," Dr Wen said.