Technicians of the future might be able to test airplane fuselages for airworthiness, check a bridge’s structural integrity, or inspect an intricate 3D-printed part for defects with only a quick scan from a camera.

Researchers at the Air Force Institute of Technology and Los Alamos National Laboratory are developing a paint containing quantum dots that could allow just that. Manufacturers could apply this paint to the surfaces of objects including vehicles, infrastructure, and spare parts, the researchers say. An inspector or a quality assurance specialist could rapidly gauge strain on those surfaces—how much they’ve been deformed—by analyzing light emitted by that paint.

To test surfaces today without destroying them in the process, technicians might create a magnetic field, but this often requires unwieldy equipment and provides results that are complicated to read. They might also use X-rays, which come with radiation safety concerns. Other scanning methods, such as ultrasound or microwaves, are limited in the materials they can measure.

“Imagine holding a camera and seeing a 2D strain surface map on your screen,” says Michael Sherburne of the Air Force Institute of Technology, one of the researchers who developed the quantum dot–infused paint. 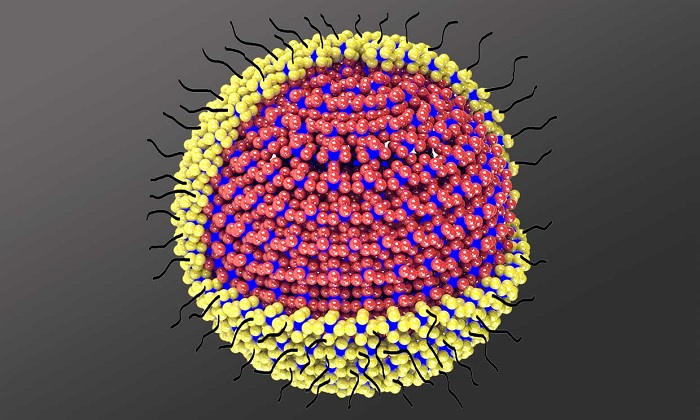 Graphic of a colloidal quantum dot where the inner core (pink), outer shell (yellow), and polymer ligands (black lines) can be seen.

Quantum dots are particles of semiconductor a few nanometers wide. Their small size brings on some unique quantum effects, as if each quantum dot were an artificial atom. For instance, quantum dots emit light when they’re excited by electromagnetic radiation. That emitted light’s wavelength changes depending on a dot’s size; smaller dots emit bluer light.

The “paint” consists of quantum dots suspended within a clear polymer. The dots emit green light when irradiated with ultraviolet light. Other quantum dot paints do exist, but they’re mostly used for aesthetics, such as to give objects a luminescent glow in the dark.

This paint’s quantum dots have an additional property: When they’re strained, the wavelength of their emitted light changes, becoming shorter (more blue) or longer (more red) depending on if they’re stretched or squeezed. The researchers envision a camera that uses a laser to bathe a painted surface with ultraviolet light, then captures the resulting emissions and creates a map of the surface’s strain.

Ideas for using light to measure strain have been around for several decades, but using quantum dots for that purpose is new, says Kirk Schanze, a professor of chemistry at the University of Florida who has previously worked in the field.

The paint does have its limitations, however. For one, very high temperatures would melt the polymer. And, of course, the quantum-dot coating can only measure strain that occurred after the paint was applied; if a technician coated an old aircraft with it, for example, the paint wouldn’t reveal any deformation that happened beforehand.

But Sherburne wants to address that latter problem. “This is definitely future work,” he says.

In addition to making an inspection process faster and easier, the paint could be more versatile than today’s strain-sensing instruments. Manufacturers could apply it to 3D-printed parts with complex shapes that don’t lend themselves well to today’s strain-measuring techniques. Furthermore, a device could pipe UV light through fibre-optic cables, allowing scanning of surfaces that are in otherwise hard-to-reach locations.

Schanze calls the researchers’ work “an interesting proof of concept,” but he says the path to using the paint for full-scale measurements is not yet clear.

Sherburne agrees that any practical applications are still a long way off. One next step is constructing a camera system that scans in ultraviolet and measures the returning colors. Although the technology exists, the researchers have yet to develop it beyond a concept. So it will likely be more than a decade before maintenance workers start coating bridges in strain-sensing paint and scanning them with UV beams.