Researchers, led by Columbia Engineering Professor Latha Venkataraman, report today that they have discovered a new chemical design principle for exploiting destructive quantum interference. They used their approach to create a six-nanometer single-molecule switch where the on-state current is more than 10,000 times greater than the off-state current—the largest change in current achieved for a single-molecule circuit to date.

This new switch relies on a type of quantum interference that has not, up to now, been explored. The researchers used long molecules with a special central unit to enhance destructive quantum interference between different electronic energy levels. They demonstrated that their approach can be used to produce very stable and reproducible single-molecule switches at room temperature that can carry currents exceeding 0.1 microamps in the on-state. The length of the switch is similar to the size of the smallest computer chips currently on the market and its properties approach those of commercial switches. The study is published today in Nature Nanotechnology.

“We observed transport across a six-nanometer molecular wire, which is remarkable since transport across such long length scales is rarely observed,” said Venkataraman, Lawrence Gussman Professor of Applied Physics, professor of chemistry, and Vice Provost for Faculty Affairs. “In fact, this is the longest molecule we have ever measured in our lab.” 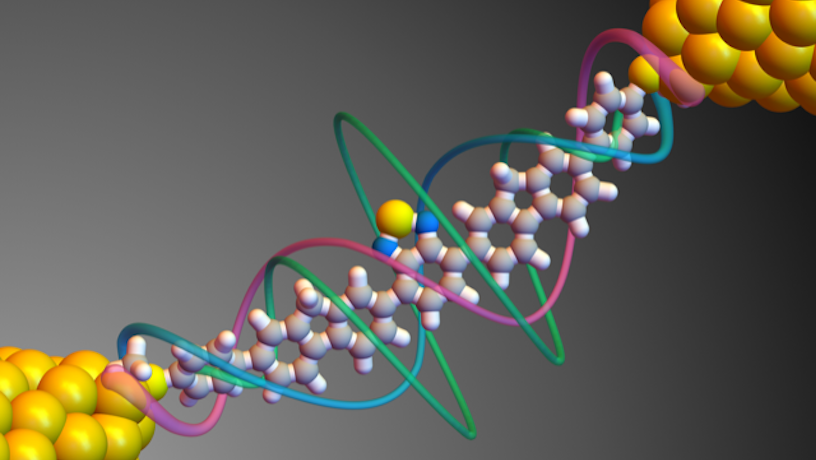 Over the last 45 years, steady decreases in transistor size have enabled dramatic improvements in computer processing and ever-shrinking device sizes. Today’s smartphones contain hundreds of millions of transistors made out of silicon. However, current methods of making transistors are rapidly approaching the size and performance limits of silicon. So, if computer processing is to advance, researchers need to develop switching mechanisms that can be used with new materials.

Venkataraman is at the forefront of molecular electronics. Her lab measures fundamental properties of single-molecule devices, seeking to understand the interplay of physics, chemistry, and engineering at the nanometer scale. She is particularly interested in gaining a deeper understanding of the fundamental physics of electron transport, while laying the groundwork for technological advances.

“The fact that electrons behave as waves is the essence of quantum mechanics,” Venkataraman noted.

At the molecular scale, quantum mechanical effects dominate electron transport. Researchers have long predicted that the nonlinear effects produced by quantum interference should enable single-molecule switches with large on/off ratios. If they could harness the quantum mechanical properties of molecules to make circuit elements, they could enable faster, smaller, and more energy-efficient devices, including switches.

“Making transistors out of single molecules represents the ultimate limit in terms of miniaturization and has the potential to enable exponentially faster processing while decreasing power consumption,” said Venkataraman. “Making single-molecule devices that are stable and able to sustain repeated switching cycles is a non-trivial task. Our results pave the way towards making single-molecule transistors.”

A common analogy is to think of transistors like a valve on a pipe. When the valve is open, water flows through the pipe. When it is closed, the water is blocked. In transistors, the water flow is replaced with the flow of electrons, or current. In the on-state, current flows. In the off-state, current is blocked. Ideally, the amount of current flowing in the on- and off-states must be very different; otherwise, the transistor is like a leaky pipe where it is hard to tell whether the valve is open or closed. Since transistors function as switches, a first step in designing molecular transistors is to design systems where you can toggle current flow between an on- and off-state. Most past designs, however, have created leaky transistors by using short molecules where the difference between the on- and the off-state was not significant.

To overcome this, Venkataraman and her team faced a number of hurdles. Their main challenge was to use chemical design principles to create molecular circuits where quantum interference effects could strongly suppress current in the off-state, thus mitigating the leakage issues.

“It is difficult to completely turn off current flow in short molecules due to the greater probability of quantum mechanical tunneling across shorter length scales” explained the study’s lead author Julia Greenwald, a PhD student in Venkataraman’s lab. “The reverse is true for long molecules, where it is often difficult to achieve high on-state currents because tunneling probability decays with length. The circuits we designed are unique because of their length and their large on/off ratio; we are now able to achieve both a high on-state current and very low off-state current.”

Venkataraman’s team created their devices using long molecules synthesized by collaborator Peter Skabara, Ramsay Chair of Chemistry, and his group at the University of Glasgow. Long molecules are easy to trap between metal contacts to create single-molecule circuits. The circuits are very stable and can repeatedly sustain high applied voltages (exceeding 1.5 V). The electronic structure of the molecules enhances interference effects, enabling a pronounced nonlinearity in current as a function of applied voltage, which leads to a very large ratio of on-state current to off-state current.

The researchers are continuing to work with the team at the University of Glasgow to see if their design approach can be applied to other molecules, and to develop a system where the switch can be triggered by an external stimulus.

“Our building a switch out of a single molecule is a very exciting step towards bottom-up design of materials using molecular building blocks,” Greenwald said. “Building electronic devices with single molecules acting as circuit components would be truly transformative.”