In a step toward making more accurate and uniform 3D-printed parts such as personalized prosthetics and dental materials, researchers at the National Institute of Standards and Technology (NIST) have demonstrated a method of measuring the rate at which microscopic regions of a liquid raw material harden into a solid plastic when exposed to light.

NIST’s custom atomic force microscope (AFM) with a nanometer-scale, cylinder-shaped tip revealed that the complex process of curing resins, as they react under light to form polymers, requires controlling how much of the light’s energy goes into forming the polymer and how much the polymer spreads out, or diffuses, during 3D printing.

Described in a new paper, the NIST experiments showed that overall light-exposure conditions, not just the total optical energy as often assumed, control how far the polymer diffuses. For example, increasing light intensity for a constant or shorter duration reduced resin-to-polymer conversion and could distort the shape of a printed part. The measurements required only a few microliters of resin, offering a way to reduce the costs of making and testing novel resins. 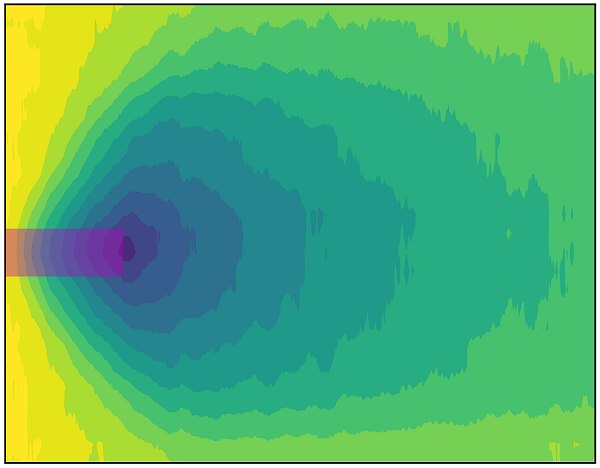 Colorized plot of the light-assisted curing of a polymer over five seconds, as measured with NIST’s custom atomic force microscope with a nanocylinder probe. Darker colors indicate a higher level of conversion from a liquid resin to a polymer. The magenta block at left represents the light fixture that initiates the reaction.

The work builds on the NIST team’s prior development of a related AFM method — sample-coupled-resonance photorheology (SCRPR) — that measures how and where a material’s properties change in real time at the smallest scales during the curing process. Those measurements were made with conventional, tapered AFM probes, which have angled sides and therefore can’t reliably measure localized liquid flow or thickness, technically referred to as viscosity.

Now, NIST researchers have quantified viscosity, conversion and diffusion by use of a cylindrical AFM probe, which has straight sides surrounded by consistent liquid flow. The probe’s vibrations, as they perturb the resin, are reduced by an amount that depends on cylinder length and liquid viscosity. The increase in liquid resin viscosity is related to conversion, enabling measurements of the polymer’s evolution in space and time.

Researchers used computational fluid dynamics to model the force slowing down, or damping, the oscillating nanocylinder and the resulting changes in its speed to determine the amount of resin affected by the motion. By relating SCRPR damping to resin viscosity and conversion, researchers made spatial maps of conversion versus time for different exposure conditions.

The AFM was equipped with a light modulator that directed patterned light from an LED to the resin sample. Measurements of the conversion of a fast-curing resin showed polymer accumulating tens of micrometers away from the light source within a few seconds of exposure, indicating the extent and speed of diffusion. The size of the light pattern was important; wider features led to higher conversion at a given light intensity and duration (see image).

SCRPR has attracted interest from industry. So far one company has visited NIST to use the instrumentation, Killgore said.