Although touted as the best clean energy carrier, the explosive nature of hydrogen (H2) warrants highly sensitive gas sensors for detecting H2 leaks. Currently used gas sensors either require high operating temperatures or have low sensitivity. Now, scientists have designed a novel sensor using holey 2D zinc oxide nanosheets, which has high sensitivity and fast response time, and has the potential for application in high-quality H2 sensors in the future.

In recent years, hydrogen (H2) has emerged as the best option for clean energy in our pursuit of an alternative fuel for mitigating environmental problems such as global warming. Hailed as 'batteries of the future,' H2 fuel cells are touted as the fuel for the future generation. While this is all well and good, there is one major problem with H2: like every other gas fuel, it is highly explosive. A minor spark can set off an explosion in the presence of as low as 4% of H2 leaked into the air, as happened in May 2019 in Gangneung, Korea, and June of the same year at the Uno-X fueling station in Norway. Therefore, safety is a major concern with handling of H2 gas; this warrants the sensing of even the smallest H2 leaks to avoid accidents.

While detectors for H2 leaks are available, they require high temperatures to operate (such as the metal-oxide semiconductor-based gas sensors) making them expensive, short-lived, and dangerous to use for detection of an explosive or flammable gas. They also suffer from low sensitivity due to a lack of enough active sites for gas detection (such as zinc oxide [ZnO] "nanosheets"). Scientists, therefore, have been busy developing sensors that can overcome these limitations.

In a new study published in Sensors and Actuators: B. Chemical, a team of scientists from Incheon National University, Korea, have come up with a novel room temperature H2 sensor design that makes use of nanometer-thin 2-D sheets of zinc oxide filled with nanometer-size holes, aptly named 'holey 2-D nanosheets.' "Ordinary ZnO nanosheets have low sensitivity due to self-restacking that blocks the active sites for gas detection. Holey 2-D nanosheets get around this problem with the holes opening up blocked active surfaces," explains Dr. Manjeet Kumar, who led the study. 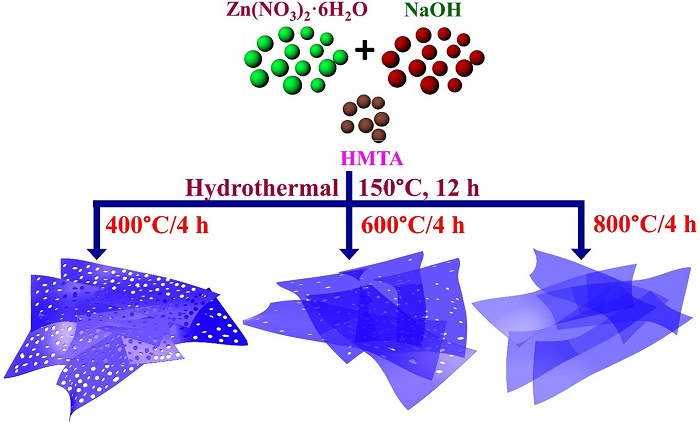 ZnO nanosheets were thermally treated at three different temperatures (400, 600, & 800°C) to tune their hole density. The hole density consistently reduced as the temperature was increased from 400°C to 800°C.

The scientists thermally treated ZnO nanosheets at three different temperatures (400°C, 600°C, and 800°C) to tune their hole density, fabricated H2 sensor devices from these samples, and recorded their response to different levels of H2 and other gases at 100 ppm (parts per million) gas concentration at room temperature. The team also investigated the validity of the metallization theory, which suggests that the underlying sensing mechanism is due to a semiconductor-to-metal transition, in which ZnO gets reduced to Zn metal under exposure to H2 gas.

They found that the ZnO nanosheet treated at 400°C ([email protected]), with the maximum number of holes, showed the highest response towards 100 ppm of H2, along with the fastest response time of ~9 s. Furthermore, [email protected] also displayed high repeatability and stability of approximately 97-99% after 45 days. Finally, they found the experimental evidence to be in support of the metallization theory.

These results strongly suggest that 2-D holey ZnO nanosheets possess remarkable physical/chemical properties that can potentially revolutionize gas sensing performance in the future. Dr. Kumar surmises, "Room temperature H2 sensors will play a key role in future technology, especially with the emergence of Internet of Things. Our holey 2-D ZnO-based sensors will enable implementation of innovative H2 detection devices that can detect gas leakage at an early stage and can be integrated with smartphones and smartwatches,"

With the prospect of a bright H2-powered future ahead of us, this technology goes a long way in ensuring a safe path to realizing this vision.