Researchers from Yokohama National University and the University of Electro-Communications in Japan have developed a highly efficient technique for producing a unique fullerene crystal, called fullerene finned-micropillar (FFMP), that is of significant use for next-generation electronics.

Fullerene is a popular choice for developing technologies not only due to its small size, it is also very durable and contains semiconductor properties, making it a good candidate in devices such as field-effect transistors, solar cells, superconductive materials, and chemical sensors. The material is in use now, however, it is difficult to handle because fullerene is a nano-scaled and generally come in a powdery state. As a solution of this problem, one-dimensional fullerene crystals are produced and used.

In a paper published in Scientific Reports in November 2020, the team details how they utilized a small heating apparatus that accepted fullerene and heated it to a temperature of 1,173 Kelvin for about an hour. The fullerene originally deposited in the heating apparatus de-crystallizes due to the heat and subsequently re-crystallizes as the temperature is lowered. This overall process, known as annealing, is over fifty times faster than the older technique for producing fullerene crystals. 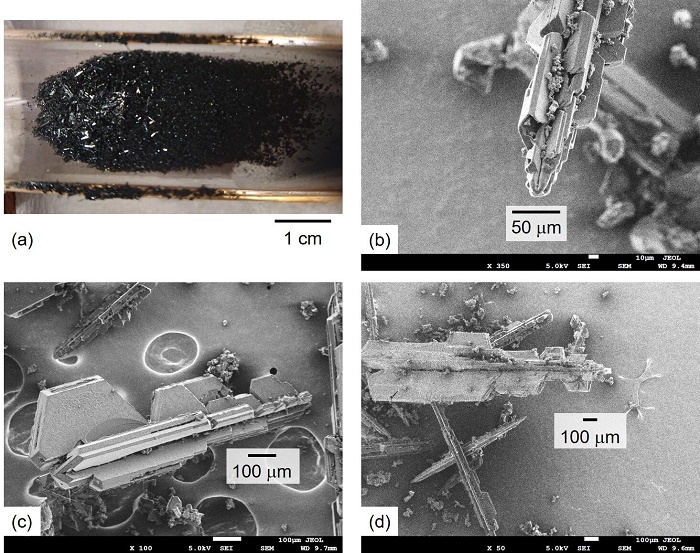 (a) Photo of produced FFMP on quarts plate and (b)-(d) scanning electron microscope images of samples.

"FFMP is expected to have electrical conductivity and n-type semiconductor functionality," Oya said.

More tests are required to confirm that FFMP does indeed retain the qualities so useful for electronic implementation, but positive results could mean solar cells with much higher efficiency, extremely small circuits integrated in flexible devices for example.

The team has already examined this annealing under different environmental conditions, temperatures, and heating time. Having studied the process, the team now has their sights set on characterizing the FFMP in the context of an electrical component. "As the next step of this study, confirming and obtaining the electrical conductivity and the n-type semiconductor functionality is expected, because the ordinary fullerene has such properties. In addition, developing 'fullerene-finned nano pillar (FFNP)' by modifying the process is also expected. We believe that FFMPs (or FFNPs) will be useful for field-effect transistors, organic photovoltaics, and so on in the near future," said Oya.

This will not be the first time Oya and his team have tackled special, small scale materials for use in electronics.