Sheets of Carbon Nanotubes Come in a Rainbow of Colors

Nanomaterials researchers in Finland, the United States and China have created a color atlas for 466 unique varieties of single-walled carbon nanotubes.

The nanotube color atlas is detailed in a study in Advanced Materials about a new method to predict the specific colors of thin films made by combining any of the 466 varieties. The research was conducted by researchers from Aalto University in Finland, Rice University and Peking University in China.

“Carbon, which we see as black, can appear transparent or take on any color of the rainbow,” said Aalto physicist Esko Kauppinen, the corresponding author of the study. “The sheet appears black if light is completely absorbed by carbon nanotubes in the sheet. If less than about half of the light is absorbed in the nanotubes, the sheet looks transparent. When the atomic structure of the nanotubes causes only certain colors of light, or wavelengths, to be absorbed, the wavelengths that are not absorbed are reflected as visible colors.”

Carbon nanotubes are long, hollow carbon molecules, similar in shape to a garden hose but with sides just one atom thick and diameters about 50,000 times smaller than a human hair. The outer walls of nanotubes are made of rolled graphene. And the wrapping angle of the graphene can vary, much like the angle of a roll of holiday gift wrap paper. If the gift wrap is rolled carefully, at zero angle, the ends of the paper will align with each side of the gift wrap tube. If the paper is wound carelessly, at an angle, the paper will overhang on one end of the tube. 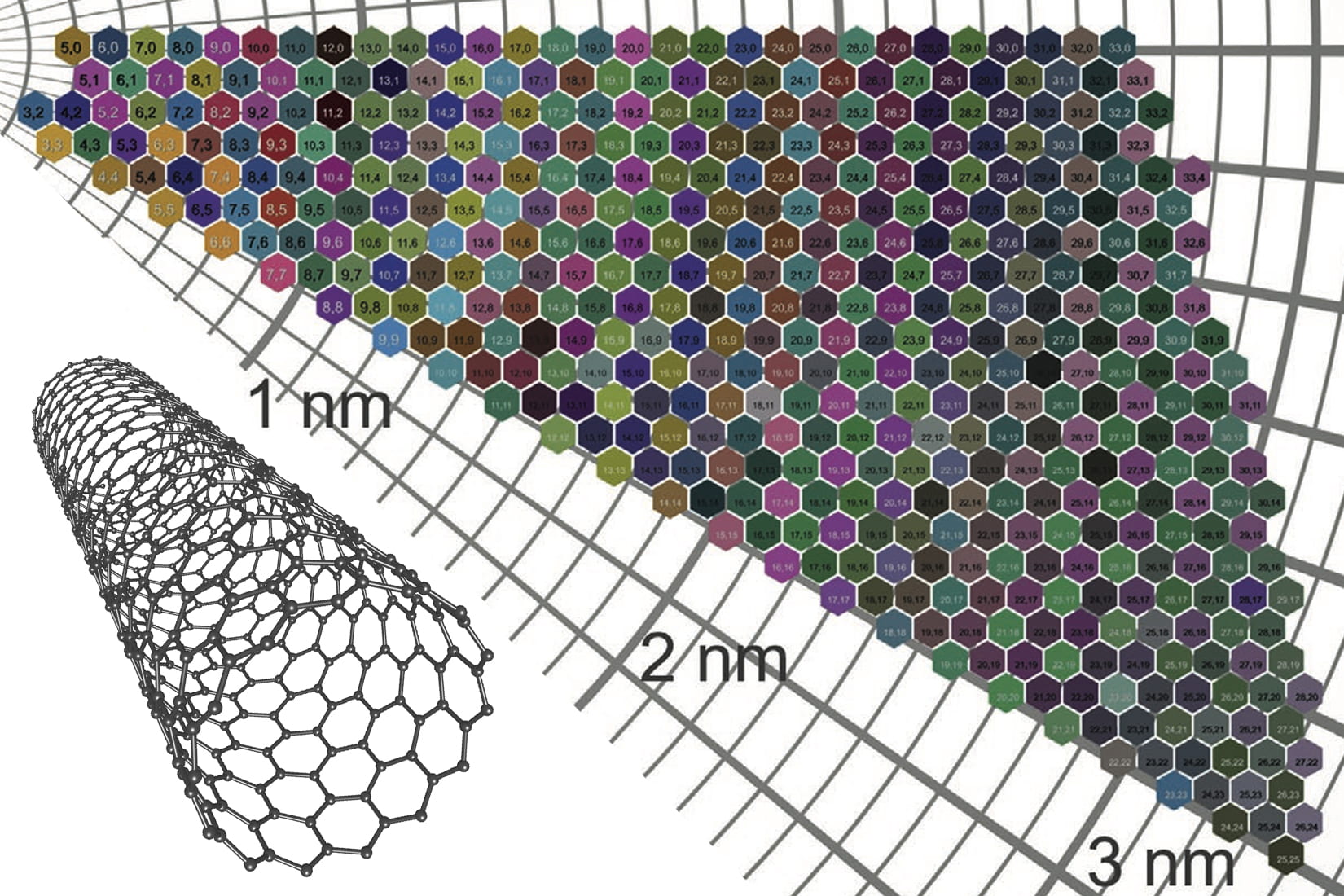 A color map illustrates the inherent colors of 466 types of carbon nanotubes with unique (n,m) designations based their chiral angle and diameter.

In the new study, Kauppinen’s team examined the relationship between the spectrum of absorbed light and the visual color of various thicknesses of dry nanotube films and developed a quantitative model that can unambiguously identify the coloration mechanism for nanotube films and predict the specific colors of films that combine tubes with different inherent colors and (n,m) designations.

Rice engineer and physicist Junichiro Kono, whose lab solved the mystery of colorful armchair nanotubes in 2012, provided films made solely of (6,5) nanotubes that were used to calibrate and verify the Aalto model. Researchers from Aalto and Peking universities used the model to calculate the absorption of the Rice film and its visual color. Experiments showed that the measured color of the film corresponded quite closely to the color forecast by the model.

The Aalto model shows that the thickness of a nanotube film, as well as the color of nanotubes it contains, affects the film’s absorption of light. Aalto’s atlas of 466 colors of nanotube films comes from combining different tubes. The research showed that the thinnest and most colorful tubes affect visible light more than those with larger diameters and faded colors.

“Esko’s group did an excellent job in theoretically explaining the colors, quantitatively, which really differentiates this work from previous studies on nanotube fluorescence and coloration,” Kono said.

Since 2013, Kono’s lab has pioneered a method for making highly ordered 2D nanotube films. Kono said he had hoped to supply Kauppinen’s team with highly ordered 2D crystalline films of nanotubes of a single chirality.

“That was the original idea, but unfortunately, we did not have appropriate single-chirality aligned films at that time,” Kono said. “In the future, our collaboration plans to extend this work to study polarization-dependent colors in highly ordered 2D crystalline films.”

The experimental method the Aalto researchers used to grow nanotubes for their films was the same as in their previous studies: Nanotubes grow from carbon monoxide gas and iron catalysts in a reactor that is heated to more than 850 degrees Celsius. The growth of nanotubes with different colors and (n,m) designations is regulated with the help of carbon dioxide that is added to the reactor.

“Since the previous study, we have pondered how we might explain the emergence of the colors of the nanotubes,” said Nan Wei, an assistant research professor at Peking University who previously worked as a postdoctoral researcher at Aalto. “Of the allotropes of carbon, graphite and charcoal are black, and pure diamonds are colorless to the human eye. However, now we noticed that single-walled carbon nanotubes can take on any color: for example, red, blue, green or brown.”

Kauppinen said colored thin films of nanotubes are pliable and ductile and could be useful in colored electronics structures and in solar cells.

“The color of a screen could be modified with the help of a tactile sensor in mobile phones, other touch screens or on top of window glass, for example,” he said.

Kauppinen said the research can also provide a foundation for new kinds of environmentally friendly dyes.