A new nanomaterial helps obtain hydrogen from a liquid energy carrier, in a key step toward a stable and clean fuel source

Hydrogen is a sustainable source of clean energy that avoids toxic emissions and can add value to multiple sectors in the economy including transportation, power generation, metals manufacturing, among others.

Technologies for storing and transporting hydrogen bridge the gap between sustainable energy production and fuel use, and therefore are an essential component of a viable hydrogen economy. But traditional means of storage and transportation are expensive and susceptible to contamination.

As a result, researchers are searching for alternative techniques that are reliable, low-cost and simple. More-efficient hydrogen delivery systems would benefit many applications such as stationary power, portable power, and mobile vehicle industries.

Now, as reported in the journal Proceedings of the National Academy of Sciences, researchers have designed and synthesized an effective material for speeding up one of the limiting steps in extracting hydrogen from alcohols. The material, a catalyst, is made from tiny clusters of nickel metal anchored on a 2D substrate.

The team led by researchers at Lawrence Berkeley National Laboratory’s (Berkeley Lab) Molecular Foundry found that the catalyst could cleanly and efficiently accelerate the reaction that removes hydrogen atoms from a liquid chemical carrier. The material is robust and made from earth-abundant metals rather than existing options made from precious metals, and will help make hydrogen a viable energy source for a wide range of applications. 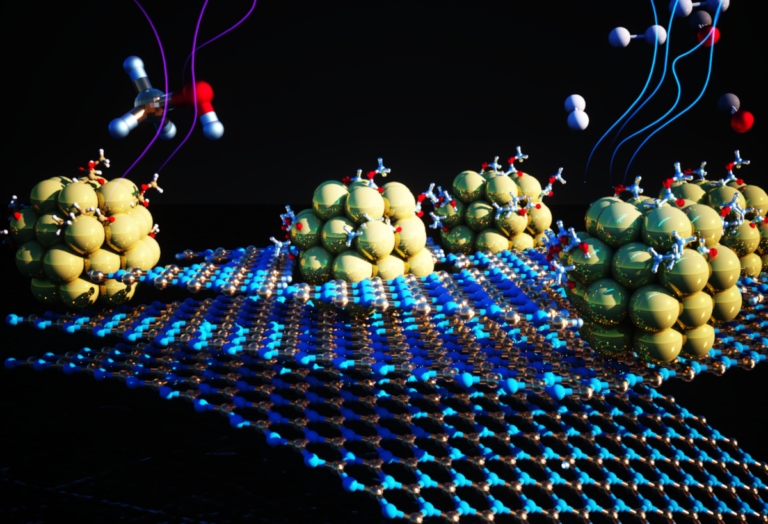 Illustration of the 2D boron nitride substrate with imperfections that host tiny nickel clusters. The catalyst aids the chemical reaction that removes hydrogen from liquid chemical carriers, making it available for use as a fuel.

“We present here not merely a catalyst with higher activity than other nickel catalysts that we tested, for an important renewable energy fuel, but also a broader strategy toward using affordable metals in a broad range of reactions,” said Jeff Urban, the Inorganic Nanostructures Facility director at the Molecular Foundry who led the work. The research is part of the Hydrogen Materials Advanced Research Consortium (HyMARC), a consortium funded by the U.S. Department of Energy’s Office of Energy Efficiency and Renewable Energy Hydrogen and Fuel Cell Technologies Office (EERE).

Through this effort, five national laboratories work towards the goal to address the scientific gaps blocking the advancement of solid hydrogen storage materials. Outputs from this work will directly feed into EERE’s [email protected] vision for affordable hydrogen production, storage, distribution and utilization across multiple sectors in the economy.

Chemical compounds that act as catalysts like the one developed by Urban and his team are commonly used to increase the rate of a chemical reaction without the compound itself being consumed—they might hold a particular molecule in a stable position, or serve as an intermediary that allows an important step to be reliably to completed. For the chemical reaction that produces hydrogen from liquid carriers, the most effective catalysts are made from precious metals.

However, those catalysts are associated with high costs and low abundance, and are susceptible to contamination. Other less expensive catalysts, made from more common metals, tend to be less effective and less stable, which limits their activity and their practical deployment into hydrogen production industries.

To improve the performance and stability of these earth-abundant metal-based catalysts, Urban and his colleagues modified a strategy that focuses on tiny, uniform clusters of nickel metal. Tiny clusters are important because they maximize the exposure of reactive surface in a given amount of material. But they also tend to clump together, which inhibits their reactivity.

Postdoctoral research assistant Zhuolei Zhang and project scientist Ji Su, both at the Molecular Foundry and co-lead authors on the paper, designed and performed an experiment that combatted clumping by depositing 1.5-nanometer-diameter nickel clusters onto a 2D substrate made of boron and nitrogen engineered to host a grid of atomic-scale dimples.

The nickel clusters became evenly dispersed and securely anchored in the dimples. Not only did this design prevent clumping, but its thermal and chemical properties greatly improved the catalyst’s overall performance by directly interacting with the nickel clusters.

“The role of the underlying surface during the cluster formation and deposition stage has been found to be critical, and may provide clues to understanding their role in other processes” said Urban.

Detailed X-ray and spectroscopy measurements, combined with theoretical calculations, revealed much about the underlying surfaces and their role in catalysis. Using tools at the Advanced Light Source, a DOE user facility at Berkeley Lab, and computational modeling methods, the researchers identified changes in the physical and chemical properties of the 2D sheets while tiny nickel clusters occupy pristine regions of the sheets and interact with nearby edges, thus preserving the tiny size of the clusters.

The tiny, stable clusters facilitated the action in the processes through which hydrogen is separated from its liquid carrier, endowing the catalyst with excellent selectivity, productivity, and stable performance.

Calculations showed that the catalyst’s size was the reason its activity was among the best relative to others that have recently been reported. David Prendergast, director of the Theory of Nanostructured Materials Facility at the Molecular Foundry, along with postdoctoral research assistant and co-lead author Ana Sanz-Matias, used models and computational methods to uncover the unique geometric and electronic structure of the tiny metal clusters.

Bare metal atoms, abundant on these tiny clusters, more readily attracted the liquid carrier than did larger metal particles. These exposed atoms also eased the steps of the chemical reaction that strips hydrogen from the carrier, while preventing the formation of contaminants that may clog the surface of the cluster.

Hence, the material remained free of pollution during key steps in the hydrogen production reaction. These catalytic and anti-contamination properties emerged from the imperfections that had been deliberately introduced to the 2D sheets and ultimately helped keep the cluster size small.

In their catalyst, the researchers achieved the goal of creating a relatively inexpensive, readily available, and stable material that helps to strip hydrogen from liquid carriers for use as a fuel. This work came out of a DOE effort to develop hydrogen storage materials to meet the targets of EERE’s Hydrogen and Fuel Cell Technologies Office and to optimize the materials for future use in vehicles.

Future work by the Berkeley Lab team will further hone the strategy of modifying 2D substrates in ways that support tiny metal clusters, to develop even more efficient catalysts. The technique could help to optimize the process of extracting hydrogen from liquid chemical carriers.