By examining tiny particles of gold with powerful X-ray beams, scientists hope they can learn how to cut down on harmful carbon monoxide emissions from motor vehicles.

Carbon monoxide is a colorless, odorless and dangerous gas produced by cars, trucks and other vehicles that burn fossil fuels. Exhaust systems use a catalytic converter to change that carbon monoxide into nontoxic carbon dioxide, but according to the U.S. Environmental Protection Agency, fuel-burning vehicles are the greatest source of carbon monoxide emissions in the atmosphere, adding to the abundance of greenhouse gases in the air.

Scientists around the world are working to reduce those emissions, and one way of doing so is to learn more about the chemical reactions that occur inside the exhaust system. Those reactions often use gold as a catalyst. While large amounts of gold are inert, tiny particles of it are an active catalyst in the oxidization of carbon monoxide, a reaction that changes it into carbon dioxide.

Aline Passos and Florian Meneau have been studying that reaction for years. Both work at the Brazilian Synchrotron Light Laboratory (LNLS), Passos as a chemist and Meneau as a physicist. Together they lead a research team that recently used the ultrabright X-rays of the Advanced Photon Source (APS), a U.S. Department of Energy (DOE) Office of Science User Facility at the DOE’s Argonne National Laboratory, to illuminate tiny particles of gold as they catalyzed a similar reaction to the one that happens inside a car’s exhaust. The results of this research were published in Nature Communications. 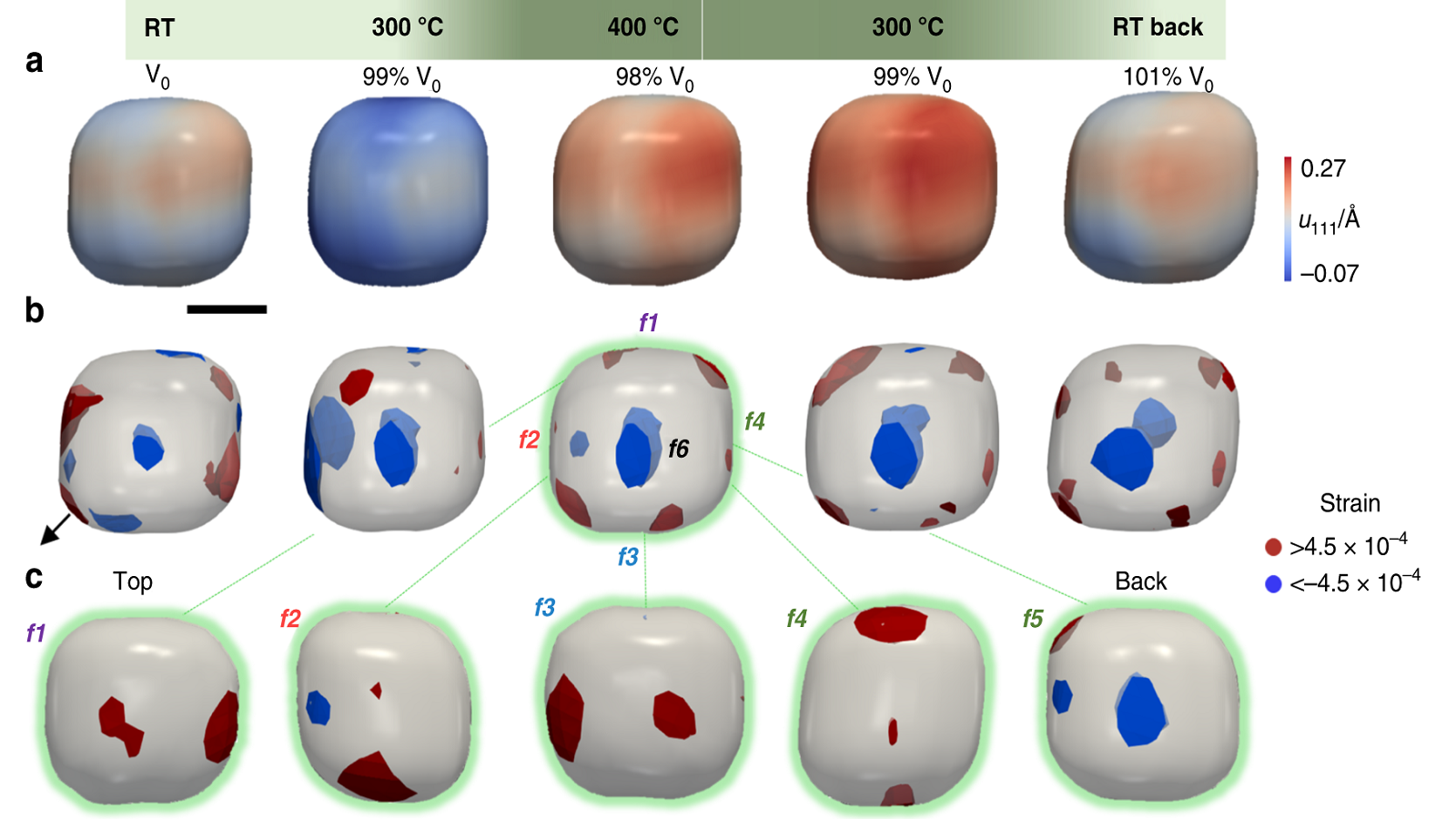 Three different 3D representations of cube-shaped gold nanoparticles as they oxidize carbon monoxide. The data shows the strain occurring mostly at the corners and edges.

The properties of this reaction are well known, Passos and Meneau said, but studying the reaction of a single small gold particle as it undergoes this reaction is new scientific territory, and only possible because of the technology available at the APS.

To conduct this experiment, Passos synthesized gold nanoparticles, about 60 nanometers in diameter. (For scale, a sheet of paper is about 100,000 nanometers thick.) She constructed them in two shapes, spheres and cubes, and introduced some chemical defects to some of the particles, changing the atomic structure slightly to see if that affected the way they catalyzed the reaction.

”The atoms in different positions change, and they change the electronic and chemical properties,” Meneau said. ​“It’s well known how to do this. But we had only been able to examine the catalysis stage before. We have not been able to observe what changes inside a single particle during the reaction.”

To accomplish this, the Brazilian team then brought these particles to beamline 34-ID-C at the APS, which specializes in what is called ​“in situ” imaging experiments. This means the APS X-ray beams can be used to take pictures of samples while they are undergoing reactions — changes in temperature, for instance, or increased pressure — in real time. In this case, scientists used the gold nanoparticles to oxidize carbon monoxide and captured the changes in the crystalline framework of the particles as the reaction was happening.

Wonsuk Cha, an assistant physicist with Argonne’s X-ray Science Division (XSD) and a co-author on the paper, has been working for years on in situ experiments at this beamline. The challenge, he says, has been developing chambers for the experiments that are compatible with the imaging technique.

“One of the challenges is the small size of the samples we work with,” he said. ​“The beam size is typically 500 nanometers wide, and we have perfected techniques for monitoring the sample’s position within the beam, which enables the experiment to keep going.”

The technique used in this experiment is called coherent X-ray diffraction imaging (CDI), and Ross Harder, a physicist with XSD, has been the lead developer of instrumentation for that technique at Argonne since 2008. For CDI experiments, the X-ray beam diffracts off of the sample and projects a pattern of information on a detector, and computer algorithms are then used to interpret that information and construct an image from it.

“We can see nanoscale images that we can’t see with a regular light,” Harder said. ​“There are only a handful of light sources in the world capable of doing this experiment.”

The result, Meneau said, is a new picture of the way these nanoparticles experience catalytic reactions. The image that emerged is a map of the strain in the particle — a measure of the change of shape when the sample undergoes stress — to the corners and edges, showing that these parts of the nanoparticles are most involved in the catalysis.

The data also show that the strain can be affected by induced chemical changes, and that identically shaped and sized nanoparticles do not experience this reaction the same way. This means that the reaction itself can potentially be changed on a chemical level by altering the catalyst.

While samples of the size used in this experiment might seem small, the typical size for a gold catalyst in industrial applications is five nanometers thick, about the width of two strands of human DNA. Passos and Meneau said that the next step for their research is to scale it down, with the goal of capturing the catalytic reaction in smaller and smaller samples.

A massive upgrade project underway at the APS will allow for this scaling down, they said, as will the new light source at LNLS, Sirius, which is scheduled to go online in 2021. The APS Upgrade will increase the brightness and coherent flux by 100 to 1,000 times compared to the current APS, which will improve the quality of diffraction images.

“Sixty nanometers is way too large for industry,” Meneau said, ​“but the APS Upgrade will let us investigate smaller samples. The new machines can do this.”

Crafting A “Sponge” for Adsorbing and Desorbing Gas Molecules

From Recycling to Upcycling: A Smarter Way of Dealing with Plastic